What to do with a $50 million signing bonus? Russell Wilson’s teammates have a few ideas

The Broncos announced a new contract extension for star quarterback Russell Wilson on Thursday. The contract will last five years and is worth $245 million, with $165 million guaranteed. It will take effect after he plays the final two seasons on his current deal, and run through the 2028 season.

In light of the news, DNVR asked the most important questions about the deal.

Can you imagine a quarter-billion dollars?

Russell Wilson’s contract is a few dollars shy of a quarter-billion dollars. He’s guaranteed $165 million, or enough for a $4,520 daily budget for 100 years. He took home a $50 million check up front on Thursday.

“It’s a lot of money, a lot of money,” Lloyd Cushenberry said. “It’s a crazy amount. It just goes to show how much money is out there (in the NFL) right now.”

A lot of money is an understatement.

But, as Melvin Gordon points out, Russell Wilson lives in a different world.

After picking up his signing bonus this week, Wilson has taken home $236,362,520 in NFL earnings, according to Spotrac. He’ll add $241,000,000 to that total if he plays out this full contract. Endorsement deals with Mercedes-Benz, Nike, Bose, Amazon and others help him pick up another $14 million per year, according to Forbes. And none of that includes Ciara’s business profile.

Those numbers are mind-boggling, but NFL games comprised 75 of the 100 most-watched TV programs in 2021. And one group of people is more important to that success than any other.

Cushenberry made a case for big paydays for the big boys up front.

“The media don’t wanna—they’re not gonna hype us up. They don’t really want to talk to us much,” Cushenberry said. “Linemen are never gonna get that much money. It’s about playmakers—the guys who score the touchdowns on Sundays—but we’re doing all the dirty work so we should get somewhat close to some of that money.”

Cushenberry is two seasons away from his chance to negotiate a salary for the first time. It’s a safe bet he’ll make more than the $1.2 million he earns now. Who knows, maybe linemen will be making Russell Wilson money by then.

But probably not, and he’ll probably have the same regret as Javonte Williams.

What would your first purchase be?

When Courtland Sutton signed his extension last season, he nearly matched his career earnings when he cashed his signing bonus. He had a nice dinner with his family to celebrate, but that was it.

“It was the middle of the season, so it was business like usual,” he said.

A couple of youngsters on the team have bigger ideas.

He’s a bowler, he spent much of his offseason bowling and he came within a strike of a perfect game. He typically scores somewhere between 180 and 200.

And his dream house would include a two-lane bowling alley.

“I mean with that kind of money I’m probably going to want four lanes,” Meinerz said.

What will Russ buy?

This question is a lot tougher that the last one. What does a man who can have almost anything buy for himself?

Javonte Williams struggled, but was able to come up with an answer.

“He’s already got everything. I don’t know,” Williams said, laughing. “Nah, but probably a new watch. I think he likes watches. I’ve seen him wear like three or four watches. He’d probably get a new watch.”

Almost everybody in the locker room mentioned Wilson’s charity work. Wilson was named the NFL’s Walter Payton Man of the Year in 2021, the league’s most prestigious award for community engagement.

In the year leading up to the award, Wilson and Ciara had worked with their charity, the Why Not You Foundation. They donated 1 million meals to Feeding America and Food Lifeline. They helped to create the Meals Up program, which raised 50 million more meals. They founded the Why Not You Academy, a tuition-free public charter school near Seattle. They were also vocal in the social justice movement.

The one missing piece of the resume was that the Wilson’s couldn’t continue their children’s hospital visits every Tuesday, because of the pandemic. They’re back to their weekly ritual now, though.

Wilson’s teammates are hoping the charity extends to them as well.

“He’s definitely going to be picking up the checks,” Courtland Sutton said. “We’re probably going to get us a nice little dinner here soon courtesy of young Russ.”

“He’ll have to take me out to dinner or something,” he said. “A very expensive one, too. I think Kareem (Jackson) is setting it up.”

But that’s not it.

We learned Friday night how Russell Wilson and Ciara celebrated his new contract; they were spotted at the U.S. Open in New York, watching Serena Williams play what was likely her final singles match in the event.

Who would spend the most money?

While Meinerz was trying to decide which of his teammates would spend the most when the signing bonus hit their account, PJ Locke jumped in.

“PJ would,” the safety said, before backing off his proclamation.

Javonte Williams was quick to throw his position-mate under the bus. 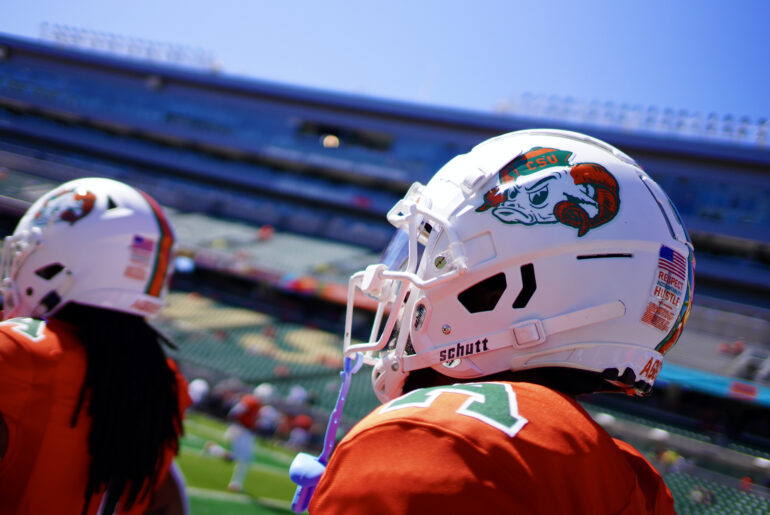