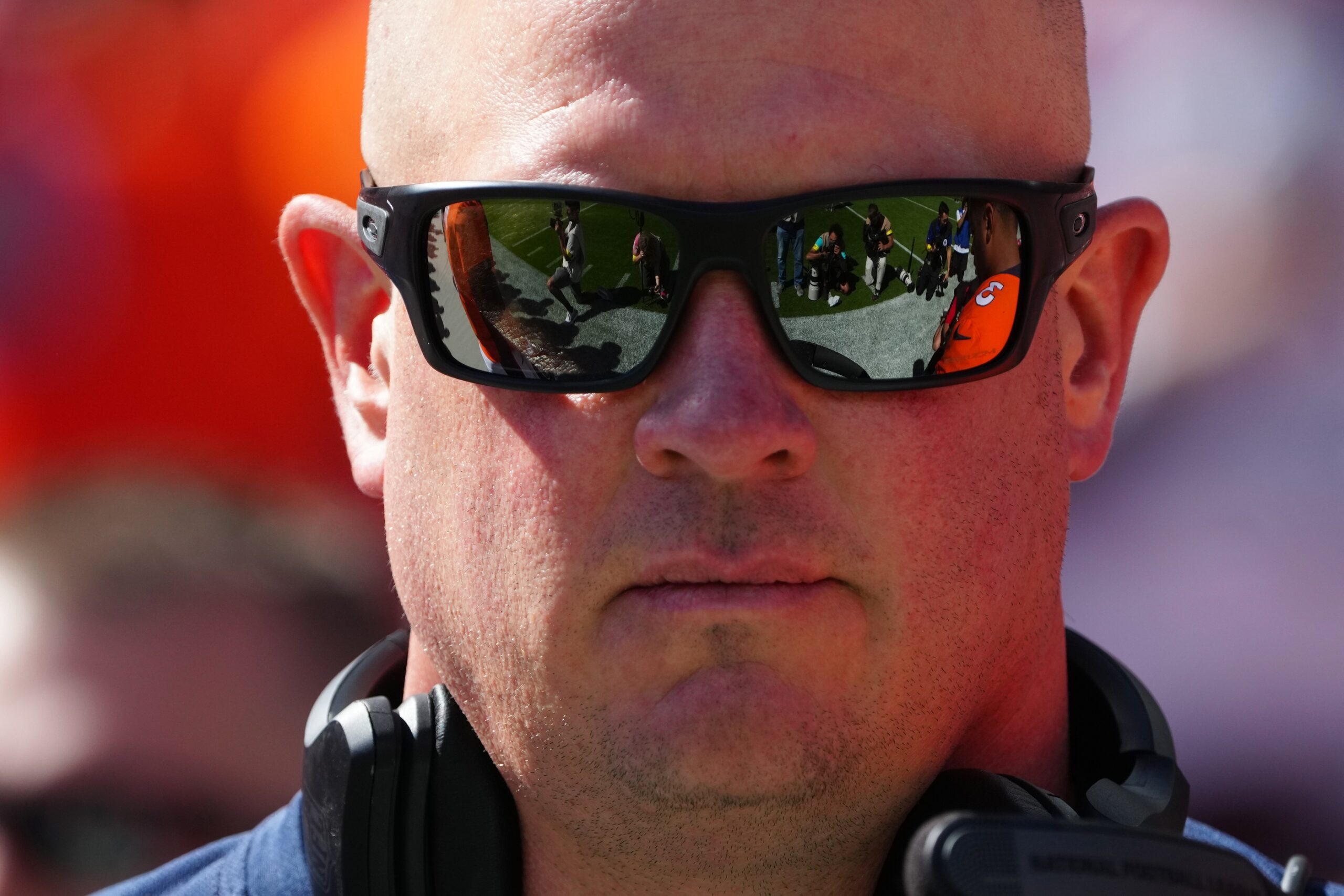 Tu’a Tagovailoa, Carson Wentz and Joe Flacco are leading the league in passing.

I’ve got some thoughts backed up about what we’ve seen so far. I’ve narrowed them down to my favorites.

And there’s a lot of them.

The Broncos played on Monday last week, which meant Game Grades and The Ride were due out on the same day. Something had to give.

But we’re back now and we’ve got two weeks of football to talk about.

Is Trevor Lawrence a stud?

New Jags head coach Doug Pederson is giving him plenty of opportunities to do what he does best: pick apart defenses underneath. Lawrence is getting spread looks, often out of five-wide, and he’s taking whatever the defense gives him; hitches, quick outs, drags, etc. Through two weeks, he looks totally capable of nickel and diming his way down the field every week. And Lawrence is almost as good on bootlegs as he is when he’s carving up defenses underneath.

The issue is with intermediate throws. Sometimes he’ll lose sight of a dropping linebacker or a crashing safety when he’s pushing the ball 10-15 yards downfield between the numbers. That’s a problem. But he has enough strengths that a good coach (not Urban Meyer) can run an efficient offense with him.

Lawrence probably isn’t ready to go head-to-head with Josh Allen, Patrick Mahomes or Justin Herbert (we’ll get a chance to see him try next week) but he’s plenty talented enough to guide a fairly weak Jags roster to at least seven wins. Who knows, maybe eight wins would be enough to steal the weakest division in the NFL. (It doesn’t hurt that Jacksonville ends the season with six weeks of cupcakes.)

The Matt Ryan experiment is off to an ugly start. And that’s being generous.

To be fair to the 37-year-old, he isn’t the only problem. The Colts have an extremely top-heavy roster. We knew coming into the season that injuries could tank the team quickly. Without their top two receivers and All-Pro linebacker, their team just wasn’t that talented on Sunday.

Matt Ryan doesn’t look good. Statue quarterbacks still have a place in this league, but there are necessary prerequisites. Namely, pocket presence.

The Colts offensive line doesn’t look as sharp as it was the past couple of seasons (maybe we’ll dig into that some other time) but Ryan isn’t helping himself out. He doesn’t seem to feel where pressure is coming from. When Josh Allen (the other one) flew straight up the middle into his face for his second sack in the early-going of the game, Ryan didn’t even notice him.

Late in the game, after taking an early beating, Ryan resigned to lobbing up deep balls after a couple of seconds in the pocket, resulting in three interceptions. Ugly stuff. Maybe Michael Pittman or Alec Pierce could’ve made a play on those if they were available to play.

Is Jalen Hurts a star?

Jalen Hurts looks like he’s playing college football. (Which he was really, really good at, in case you’d forgotten.)

The former Heisman winner and national champion can do no wrong. He’s hitting deep his balls. He’s hitting his underneath throws. He’s hitting everything in between. And his pocket awareness is miles better than where it was last season. (Can Justin Fields make that same leap? He’d better…)

Hurts hit his first 11 passes of the game against the Vikings on Monday Night Football. He was reamarkably sharp and he led a dominant Eagles team that lived up to even the most extreme of the preseason hype. Philly looked like one of those offenses that cannot be stopped, like Buffalo or Kansas City.

I’m not gonna lie though: I’m still not totally sold.

Hurts was so far from being a stud last season that I can’t watch that one game and say he’s arrived. But I’m more than willing to give him star status a month from now if he keeps this up.

And I’ll definitely be watching. For the first time since Michale Vick was in town, the Eagles are must-see TV.

What are the Bengals’ strengths?

The Bengals are good. I’m sure of it. They were in the Super Bowl seven months ago and only got better since.

But what, exactly, are they good at?

The secondary has an All-Pro but with five defensive backs on the field on most plays, one stud isn’t going to make the whole group good. And they’ve been giving up big play after big play through two weeks.

The defensive front was productive last year but it’s lacking any sort of start power and has struggled this season.

The offensive line is much improved but it isn’t a group that will lead Joe Mixon to 100 yards every week. And it definitely isn’t going to keep Joe Burrow upright, especially after giving up four sacks in the first half to the Cowboys.

The one piece you really like is the passing attack. In particular, that’s the Joe Burrow to Ja’Marr Chase connection. With Tee Higgins, Tyler Boyd and plenty of other options, there’s a lot to like on paper.

Maybe I’m overreacting to the 0-2 start, but the Bengals are playing really ugly ball right now.

Cincinnati’s strength is that it made the Super Bowl last year. And I don’t mean that in a snarky way. They found a way to beat good teams in big games and that should serve them well going forward. This season, they’ve found a way to crawl back into games that you would’ve thought were decided.

But that 0-2 hole will be tough to climb out of.

Can anybody catch the Bills?

Who is the best team in the NFL? There’s no case for anybody except the Bills.

Yep, I’m more than ready to pass the crown.

So far, there doesn’t seem to be an answer to the Buffalo offense. When they go five-wide, you’re stuck trying to defend Stefon Diggs (who is one more Davante Adams dud from being my WR1 in the league) and Gabriel Davis (who didn’t even play in the second game), while Isaiah McKenzie and Dawson Knox have miles of space underneath them to carve out space. Oh, and Josh Allen can just run the ball himself, too.

The only defense for the Bills’ offense is A) hope they run the ball, or B) hope Josh Allen makes a mistake. All you can do is put a lid over the top and give them as many chances to do something dumb as possible before they score.

And on the other side of the ball, the best scoring defense in the NFL from a year ago added Von Miller, who is playing the best football of his life. (Also, Matt Milano might be the most underrated linebacker in the NFL.)

Maybe the Bills come back to Earth. Maybe the Chiefs or Chargers or somebody else levels up. Maybe a veteran team like the Bucs or Rams or Packers will slowly iron out their wrinkles over the next few months.

But, as of today, the Bills own the NFL.

Patrick Mahomes will go through some growing pains as he learns to live without Tyreek Hill.

And if this is what growing pains look like, the rest of the division is in trouble.

Mahomes has been covering up the loss by feeding Travis Kelce even more than before and piecing together the rest of the passing game. Clyde Edwards-Helaire’s emergence as a viable receiving back has been key. Edwards-Helaire is also leading the way for an improved rushing attack.

Defensively, the pass rush has been very solid despite not putting up sack numbers. Seventh-round cornerback Jaylen Watson has been a revelation and his long pick-six is a key reason the Chiefs came back and beat the Chargers.

If the Chargers had been able to hold on and defeat the Chiefs, they would’ve had a solid claim to the throne. But they didn’t. And letting the Raiders back into the game the week before made this an easy choice.

Still, the Chargers might be the third-best team in the AFC.

Justin Herbert is living up to the preseason hype, despite losing Keenan Allen to injury. Tight end Gerald Everett has been a relevation, and he’s currently leading the team in receiving. The depth at receiver is still questionable but DeAndre Carter seems to have a firm hold on the WR3 job and has filled that role capably.

Khalil Mack has been everything the Chargers could have hoped for when they brought him in and the rest of the defense has been solid, too. Letting the Raiders and Chiefs back into the game (and eventually losing to Kansas City) leaves some questions, but there’s no doubt this is a good group with potential to be even better.

There’s a gap between No. 2 and No. 3 on this list, although there’s still plenty of time to close that gap.

Russell Wilson was great in the first game but average at best in Week 2. Without Jerry Jeudy, Tim Patrick and KJ Hamler, he has plenty of excuses. Javonte Williams and Courtland Sutton have taken the expected steps that come with a better offense around them. The offensive line may be upgraded too, but Week 1 was much better than Week 2.

The defense has been stellar despite not having a couple of key pieces. The Broncos will need that to continue while Nathaniel Hackett and the offense continue to work out the kinks.

At 0-2, the Raiders are flirting with disaster.

Davante Adams caught 12 balls for 141 yards in Week 1 but was nowhere to be found in Week 2. His 12 yards against the Chargers were his fewest since he caught one ball for eight yards against the Broncos in 2015.

The passing game in Vegas has been nothing special, which is a terrifying thought considering it was supposed to be the team’s strength. The running game hasn’t picked up the slack.

Defensively, the Raiders have struggled to penetrate and the secondary has been exposed by a pair of pretty good quarterbacks.

Wins against the Titans and Broncos in the next two weeks are a must. A third against the Chiefs would revive the season. I’m skeptical.

Everything is going to be fine. The Bs