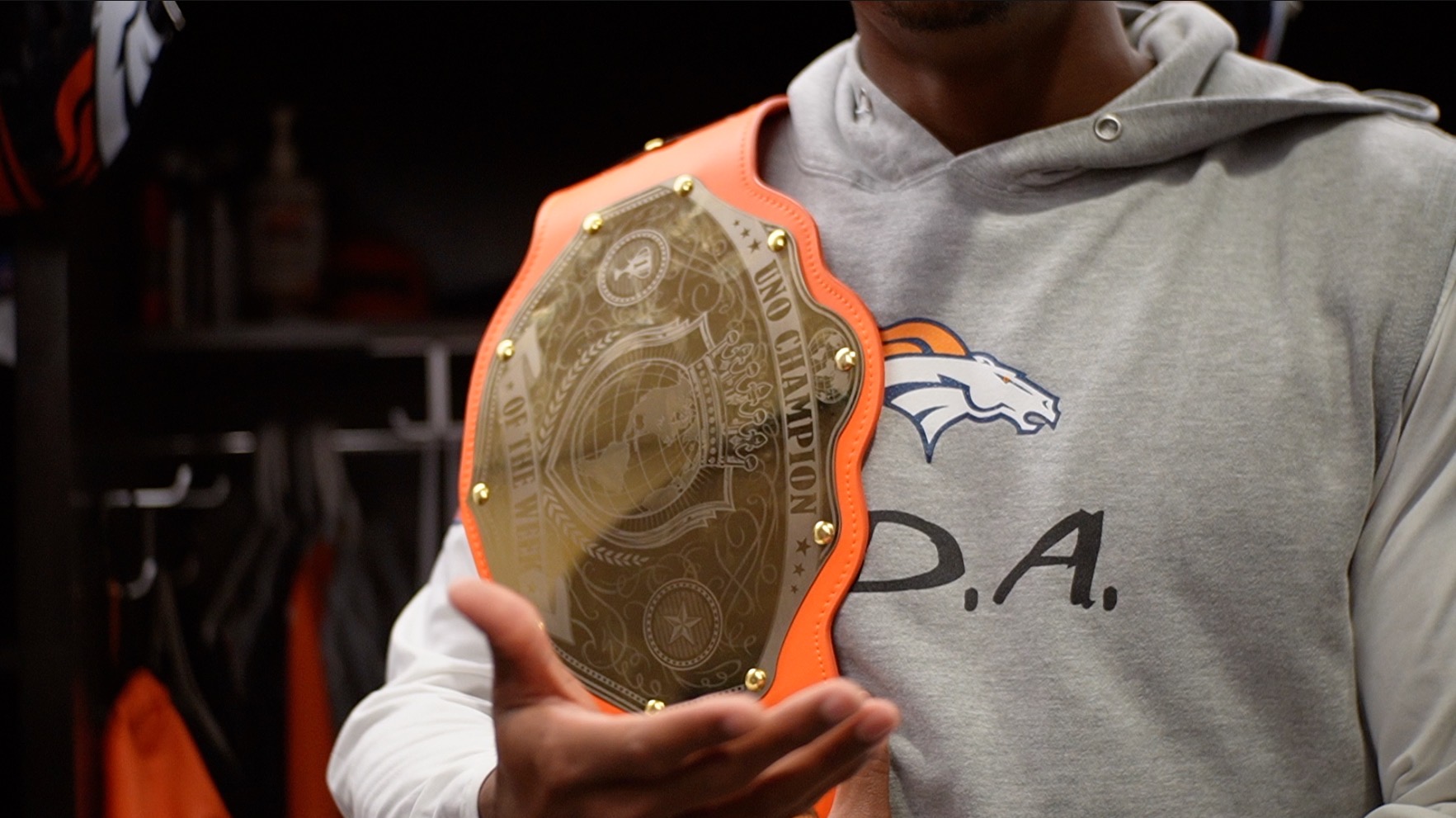 The Broncos’ Uno champion belt is missing. Jerry Jeudy thinks he knows who took it.

“They stole the damn belt,” running back Melvin Gordon told DNVR. “They hid the belt, man.”

Uno became the game of choice in the locker room during training camp, after being part of a rotation of card games played last season. The battles became more heated as camp wore on, so a weekly Uno tournament was implemented after the preseason ended.

“Everybody got serious about it,” Gordon, one of the ringleaders, said. “I went and got a belt made.”

The wrestling-style belt has “Uno Champion of the Week” etched into the gold plate on the front of the orange belt.

The goal of the game is to get rid of your hand of cards as quickly as possible. In the locker-room tournament, the last player with cards in his hand is eliminated at the end of each round. They play round after round until only one player remains. He becomes the champion for the week.

“It’s a good thing,” wide receiver Tyrie Cleveland said. “It brings a lot of chemistry together. Guys just having fun—enjoying each other.”

But it isn’t all fun and games.

The first tournament was held in the dead week after the preseason ended. Courtland Sutton won the tournament and the right to keep the belt in his locker until the next tournament.

The second tournament was played ahead of Week 1 of the regular season. Wide receiver Jerry Jeudy won, taking down K’Waun Williams in the final round.

But when Jeudy went to claim his prize, it wasn’t there.

Gordon had made a deep run in the competition but was eliminated late. He and Sutton were both, allegedly, absent when Jeudy finished off Williams.

“What a coincidence,” Jeudy said.

Those two, along with cornerback Ronald Darby, are at the top of Jeudy’s list of suspects. Cleveland thinks Jeudy is on the right track.

“I think it was Mel,” Cleveland said. “Mel or Courtland. They don’t like losing, so when they lose they want to take everything from everybody.”

Gordon is confident he knows who took the belt.

“Somebody was sore,” Gordon said. “I think it was Courtland. Go tell Courtland to stop being a sore loser. Tell him I thought he was a better man than that.”

Then Gordon took matters into his own hands.

Sutton laughed and repeated “I’m the best ever” a few times while Gordon kept yelling. He mocked Gordon for not being the belt-holder, riling Gordon up even more.

“The day Courtland lost it (in the tournament), it just ended up gone,” Gordon said. “I know he took it.”

“That’s a facade right there,” he told DNVR.

This week’s tournament hasn’t been played yet, since the belt is still missing. It’s unclear whether the tournament will take place if it doesn’t turn up.

But what happens if the belt turns up after a new champion wins the title?