My two-year-old grandson Landy is not exactly sure what organization he belongs to, but it’s some sort of a Landy Club. The other day, he finally got a chance to meet the Grand Poobah of the Board of Directors… 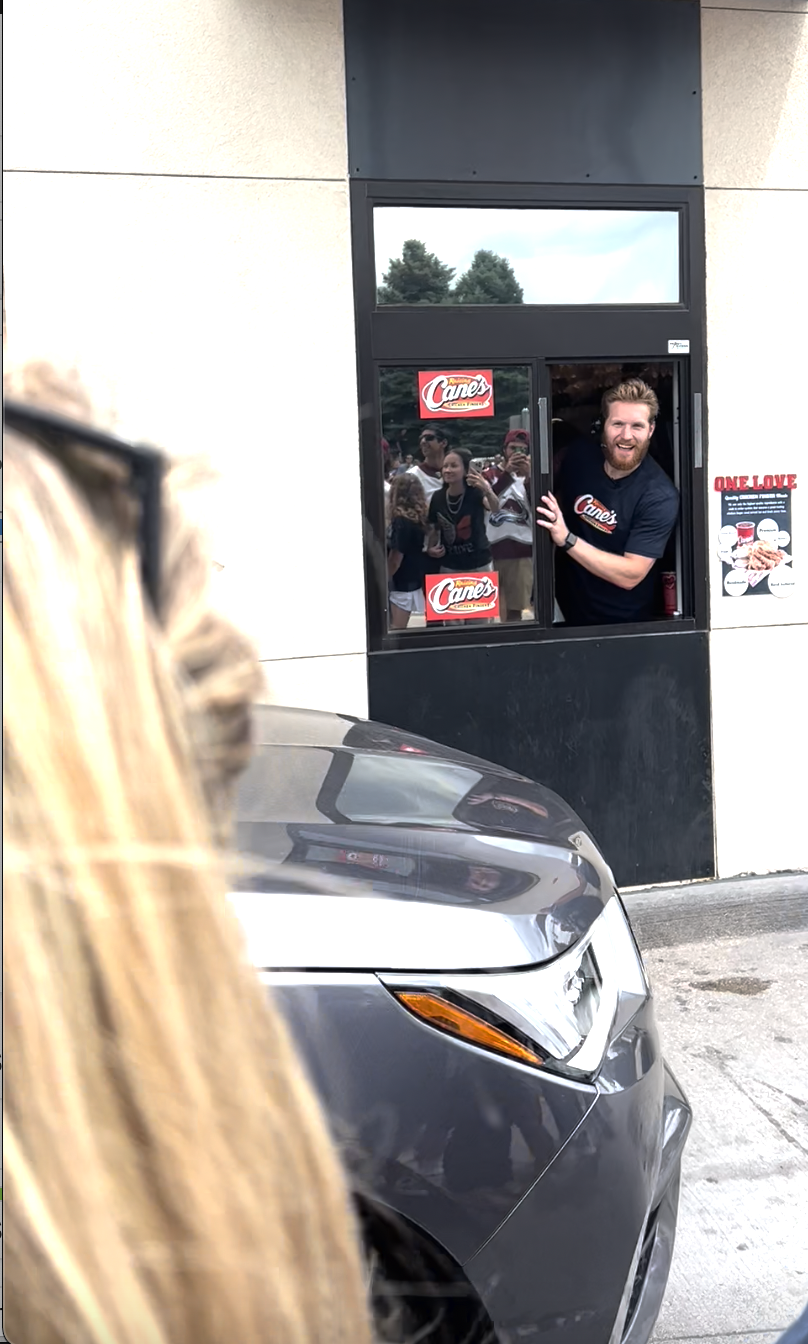 That’s my daughter yelling to Gabriel Landeskog across Raising Cane’s drive-thru, that the little boy on her arm is named Landy. Gabe’s response?

A thoughtful man of few words. Little Landy’s response in return as they left?

That’s okay. He’ll get it someday. Right now, he just knows that that’s a Landy, and he’s a Landy. Whatever club this is, they are both a part of it… Even if he mistakes the Avs Stanley Cup Champion Captain’s first name to be “Hockey”. That guy… is one like me. I’m like him. He’s one of “us”.

It’s been so refreshing to have this ray of sunshine the Colorado Avalanche brought to the Avs faithful and the state of Colorado this last several days. To see so many instances of the whole crowd of people I’m around being engaged and excited. Happy. On the same side. It was a moment.

See the attached video… Just watch this crowd at the DNVR Bar. The way the DNVR Avs crew embraces at the end. Take a moment to drink in a room full of THAT many people are all celebrating as one… and think of how much rarer scenes such as these seem to be these days.

Lotta love in that room. Common joy. Bonding, even. Do you think every single one of those folks was a Coloradan? Or of a specific political stripe? That they all could even agree on a place to eat? I mean, besides the DNVR Bar, of course. (Sorry, B 😉 )They couldn’t. They wouldn’t. You could bring together any two people in that amazingly ecstatic room, and you’d come to find quickly that even a pair of identical twins differed widely in their opinion. That no matter how agreeable you are, you and whoever is across the table from you probably strongly disagree about something. The differences between us are nothing new. The way we’re handling them certainly seems to be, though.

That seems to be what we’re focused on these days… The differences between us. What they mean to us, how we and our hearts, thoughts, and souls are simply torn asunder from one another. Irreconcilable. Too busy posing, posturing, and postulating to actually realize that we’re feeding this angry beast that’s eating us all. We’re sure that whatever bee is in today’s bonnet is worth fighting for. Yelling for. Apparently even taking each other’s lives for. We’ve ratcheted ourselves to 11 on nearly every front, barely recognizing the humanity of others around us, to a point that a room full – hell, a state full – of overjoyed human beings is the aberration, the uncommon sight instead of the rule.

But what a beautiful sight. Not the Avs winning it all. Not that it’s Colorado faithful. Those are admittedly wonderful. But more that that many people can be that happy in each other’s presence any more. Stunning stuff. It can make for groups that can move mountains. Kind of like an Avalanche.

Even more love in that “room”. Maybe the challenge becomes to find the middle ground. In looking for what we share – both good and bad, and remembering how much we have in common. That search might remind us that none of us is that different or alone. That no matter how outlandish the circumstances – even if our name happens to be Landy – there’s another one of us out there. If we go looking, there’s maybe a lot more of us out there. That no matter how different or apart or angry or upset we may feel with another person… that they are one of us.