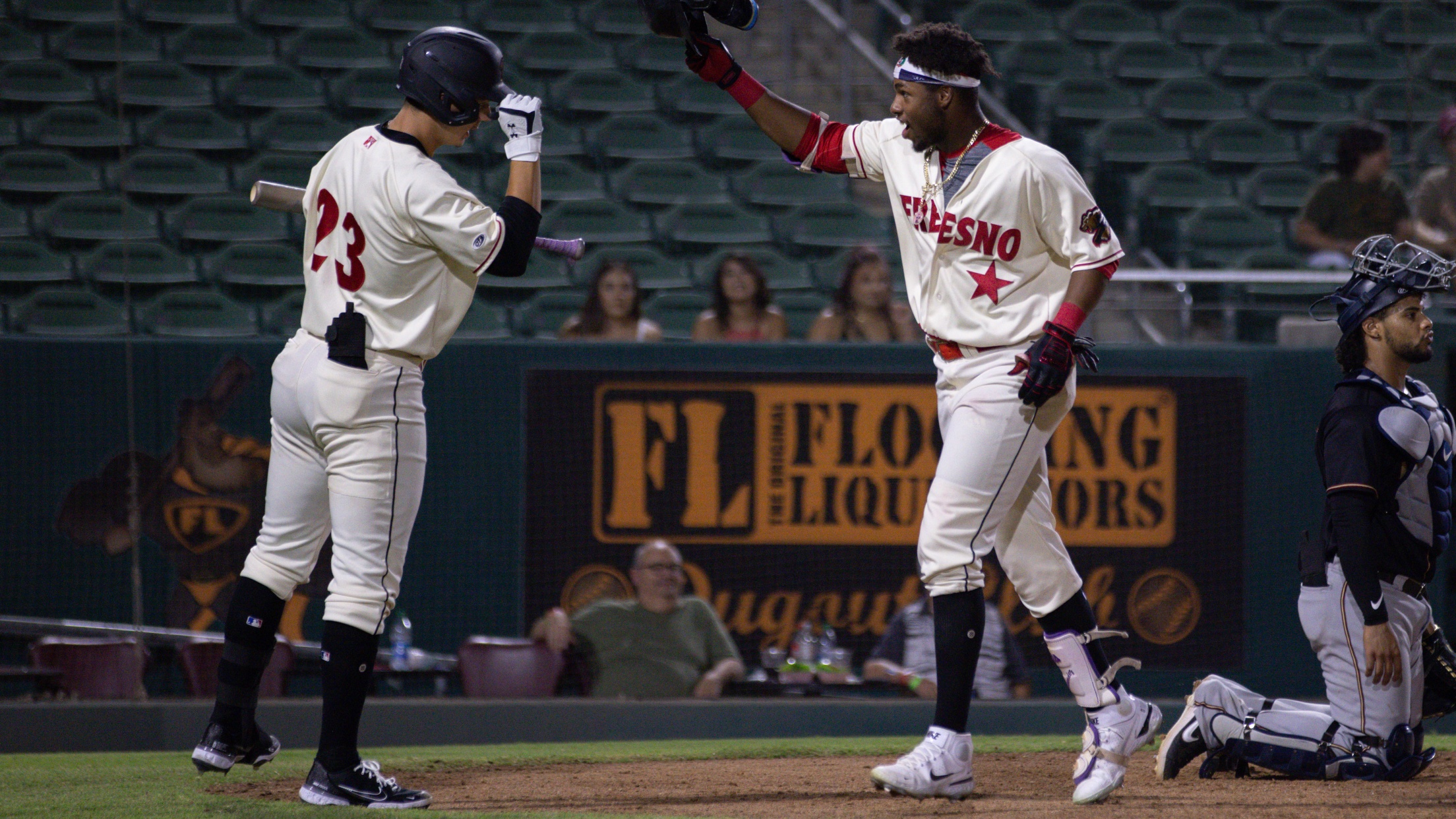 The playoff drought for the Colorado Rockies has reached a fourth-straight season.

Similar statements cannot be said about their minor league affiliates.

Both A level clubs, Spokane and Fresno Grizzlies, made the playoffs last season while the Rockies’ teams of prospects in the Arizona Complex League and Dominican Summer League finished with the best records in their division in 2021.

This year, Low-A Fresno is back in the California League Division Series on the heels of winning both the first and second half.

The Grizzlies won Game One on Tuesday night by a score of 12-3 over the San Jose Giants, an affiliate of fellow National League West club San Francisco.

On display were several of Colorado’s prospects that look to be future factors, especially during a six-run first-inning from which Fresno never looked back.

Leadoff hitter SS Adael Amador opened the game in San Jose with a walk, to the surprise of no one who’s watched him this breakout season. The 19-year-old showed great plate discipline (87 walks) en route to a .415 on-base percentage, good for fifth in the league, despite being two years younger than the competition.

He could have used his speed to swipe second base as his 26 stolen bases, tied for most on the Grizzlies, helped translate into the second-most runs scored (100) in team history.

Alas, OF Benny Montgomery singled up the middle on the first pitch to continue his trend of daily base hits.

Colorado’s first pick in 2021 had an injury-plagued season that limited action to 62 games.

OF Yanquiel Fernández also wasted no time by slashing a two-run triple to right to give Fresno the early lead.

Much like Amador, the 19-year-old from Cuba did it all this season, hitting for average (.284) and power (.507 slugging percentage on 33 doubles, five triples and 21 home runs) with runners in scoring position (109 RBI).

Not only was his runs batted in total tops in the Cal League by a lot, teammate OF/1B Juan Guerrero had the second-most with 89.

Beck singled to make it 4-0 before the Giants had even made an out. He’d add two more singles and two more RBI in the first postseason of his professional career. Thompson doubled to score Beck soon after and the Grizzlies had more than enough runs they’d need on the night.

Taking the ball and going 2.1 innings was RHP Jaden Hill.

The 6’4” righty out of LSU dropped into the lap of the Rockies during the second round of the 2021 MLB Draft following Tommy John surgery that disrupted his junior year. Entering that season, he was a surefire first round selection for many.

The 22-year-old has a way to go before he can start building serious innings on his arm as a starting pitcher, but his 17.2 innings pitched in 2022 were a strong start. His 14 strikeouts and 2 walks made for an impressive 17.2 strikeouts-per-nine and 7.00 strikeouts-per-walk ratios with Fresno.

Throughout the year, manager Robinson Cancel relied on a varied group of hitters who helped the club to their historic season.

Their impressive +208 run differential, most in Minor League Baseball, aided the second-most wins (83) in all of the minors.

2B Juan Brito finished third in the league with 91 runs, a mark that placed the second baseman seventh all-time in Fresno’s franchise history. The 20-year-old also walked 78 times while striking out on just 71 occasions. Only he and Amador tallied more walks than strikeouts amongst the regulars.

3B Warming Bernabel and C/1B Hunter Goodman both contributed to the offense before being promoted to High-A and, in the case of Goodman, Double-A.

Bernabel batted .317 with 10 home runs and 54 RBI across 65 games. The 20-year-old’s ability to make contact and miss defenders was evident at the next level as he hit .305 in the Northwest League.

Goodman led the squad with 22 home runs en route to a pair of Player of the Week awards and the June Player of the Month award for the Cal League. The 22-year-old was second in the eight-team league in long balls despite having played 32% less games than the eventual leader.

A fourth-round selection in 2021 out of the University of Memphis, Goodman finished his season with 34 home runs, most in the organization.

Are There Pitchers In That League?

The Cal League average for ERA is 5.13, bested only by the 5.41 of the hitters-haven known as the Pacific Coast League.

Boasting one of the youngest pitching staff in their division, the Grizzlies had the second-best ERA in the entire league.

Victor Juarez, 19, and Brayan Castillo, 21, led the way in innings pitched with just over 200 combined.

Juarez was among the 10 youngest players in the league and still managed two Pitcher of the Week awards. Over one four game stretch, the Mexico-born right-hander posted three outings of six scoreless innings.

It’s one reason why Rockies Pitching Coordinator Doug Linton has compared him to a young Zack Greinke.

Even younger is 18-year-old Jordy Vargas who had a remarkable 3.65 ERA in six starts. Toss in a team-high 10 saves for Angel Chivilli, 19, and there’s some hope that Coors Field will also see some promising pitchers before too long.

Though Fresno had home field advantage entering the season, they need just one more win against San Jose Giants over the next two games at Chukchansi Park.

If the Grizzlies win, they’ll take on the winner of the Southern Division Series starting September 18 and host Games Two and Three (if necessary) on September 20-21.

(Photo: Jordan Beck and Yanquiel Fernandez of the Fresno Grizzlies, courtesy of MILB.com/Fresno)