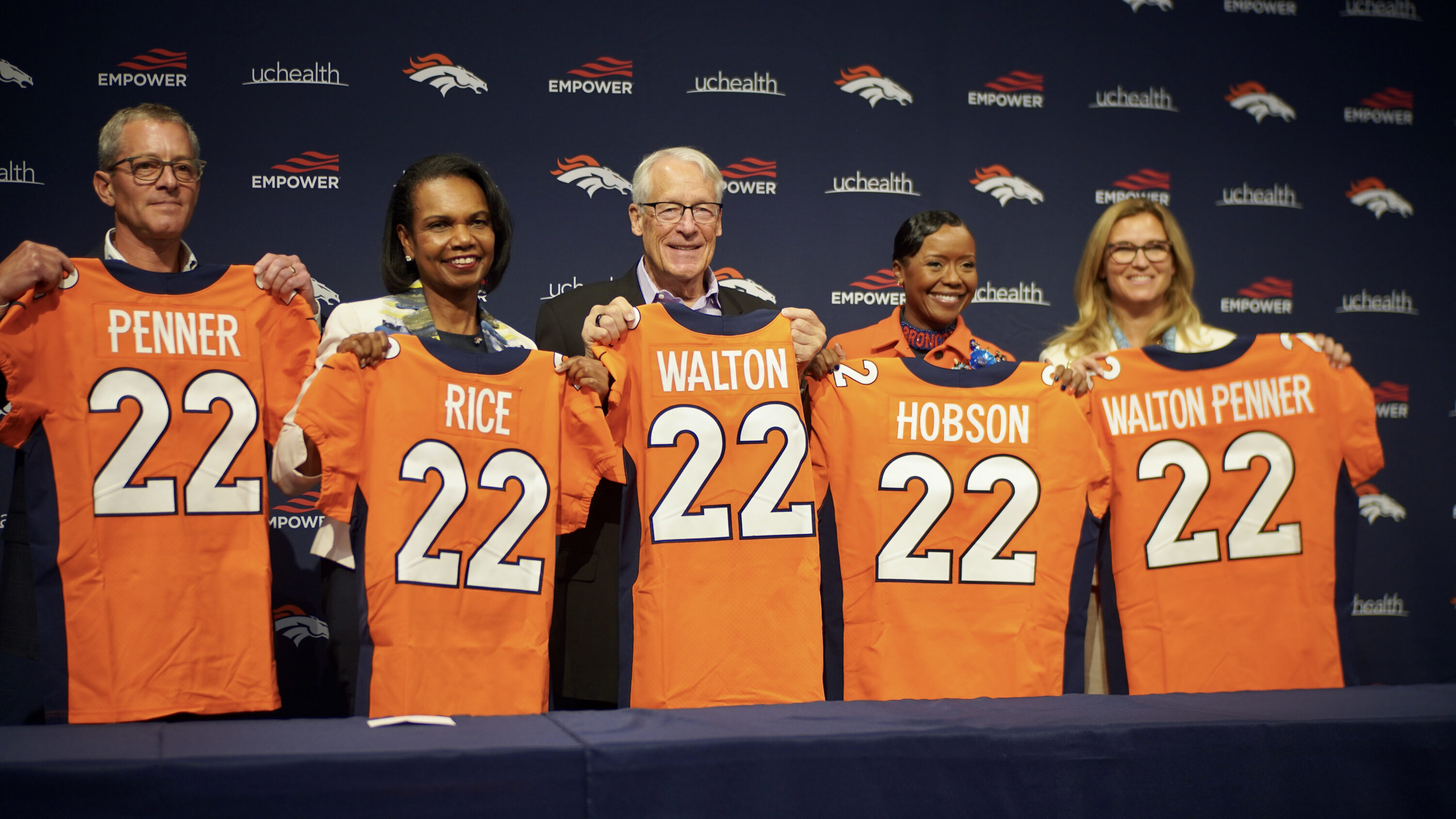 The Walton-Penner Family Ownership Group met the media in Denver for the first time since officially completing its purchase of the Denver Broncos on Tuesday.

The one member not present was Lewis Hamilton, the greatest driver in F1 history and Forbes’ most-marketable athlete in the world. The 37-year-old is in the middle of his racing season, and a few days out from a competition in Budapest.

Colorado legend Dave Logan opened the event Wednesday afternoon by introducing outgoing team president and CEO Joe Ellis, who is stepping down as part of the transition. Ellis introduced the new ownership group.

Here are the big stories:

The framework of the Denver Broncos’ organization is starting to become clear.

Greg Penner will serve as the team’s CEO and will take take the lead for the ownership team. The whole group will have a say in big-picture decisions—there won’t be a formal board of directors—but Penner will be responsible for making the final calls.

“Obviously, with six of us, someone has to be on point, so I will take that role. So you will be seeing, probably, most from me here,” Penner said. “Rob [Walton] and Carrie [Walton Penner] will probably be here with me a lot as well dealing with any big issues or questions or strategic decisions that we are making.”

Penner will also hire a team president and he gave some details about what he’s looking for.

“I think sports experience is really important. Is it absolutely essential? I’d say probably no, but it would make the bar higher to find the right person,” he said. “We start with general characteristics. We want someone that [is] really highly [involved with] charity, great values, great leadership, [a] diverse set of experiences. Someone that aligns with our values as partners here. We can find somebody great.”

Penner will also retain his role as the chairman of the board of Walmart. It’s still unclear how much of his time will be dedicated to fulfilling his Walmart duties but he is not in charge of running the day-to-day operations for the nation’s largest employer.

No more additions to the ownership team

The six-member ownership group is the full team, at least for now.

When asked about adding Peyton Manning or John Elway, Greg Penner complimented both repeatedly and said he would lean on them as he settles into his job.

“We are in a terrific position of having two great Broncos, they were both out here today, and it’s been fantastic to spend some time with them,” he said. “We have had a chance to get to know him through the process as well. We are just going to learn from both of them. I think it is going to be a really good relationship.”

Later on, Penner said specifically that the group was not looking to add any members and that seems to include the Hall-of-Fame quarterbacks.

“At this point, we don’t have anything to add or share on that,” Penner said. “No immediate plans.”

Fun is an emphasis

The word “fun” came ups few times during Penner’s time at the podium, and it gave a hint at the group’s priorities.

When the Walton-Penner Group was named as the top bidder and likely next owner of the Broncos, fans wondered whether the Walmart magnates would try to cut budgets and maximize profits like they often do when running the business. Their comments on Wednesday point more toward using the Broncos like a toy.

“Most of all, we are really looking forward to all having fun together with this,” Penner said. “Obviously this is a business, but this is a sports franchise. We want to win and that’s our goal and part of that is having a lot of fun as a family and with this group while we do that.”

Penner is excited to learn how to run a football team and build a winner, but he’s also going to leave the decision-making to his front office.

Condoleezza is part of the ‘Orange Crush Generation’

While most of the ownership has some ties to Denver or Colorado, Condoleezza Rice easily has the deepest roots.

“I’m a part of the ‘Orange Crush’ generation where you’d go into any grocery store or any restaurant and there were all of those Orange Crush cans piled up with Rubin Carter or Louis Wright peering over them,” she said.

Rice moved to Denver as a child and earned two degrees from the University of Denver.

“This team has a great tradition, a great heritage of winning,” she said. “But the goal now is to build on that heritage and that tradition—to continue it in a way that makes for a bright future.”

Rice has been a football fan throughout her life and has ties to the game at many levels. She spent three seasons on the College Football Playoff Selection Committee and was once rumored to be a candidate for the Cleveland Browns’ head coaching job.

“You have to understand how much I love football,” she said. “My dad was a football coach when I was born. I was supposed to be his All-American linebacker. When he got a girl, he decided to teach her about the sport instead. Even though my father has gone to the Lord, I have to think that today he’s thinking, ‘She finally got a really important job.'”