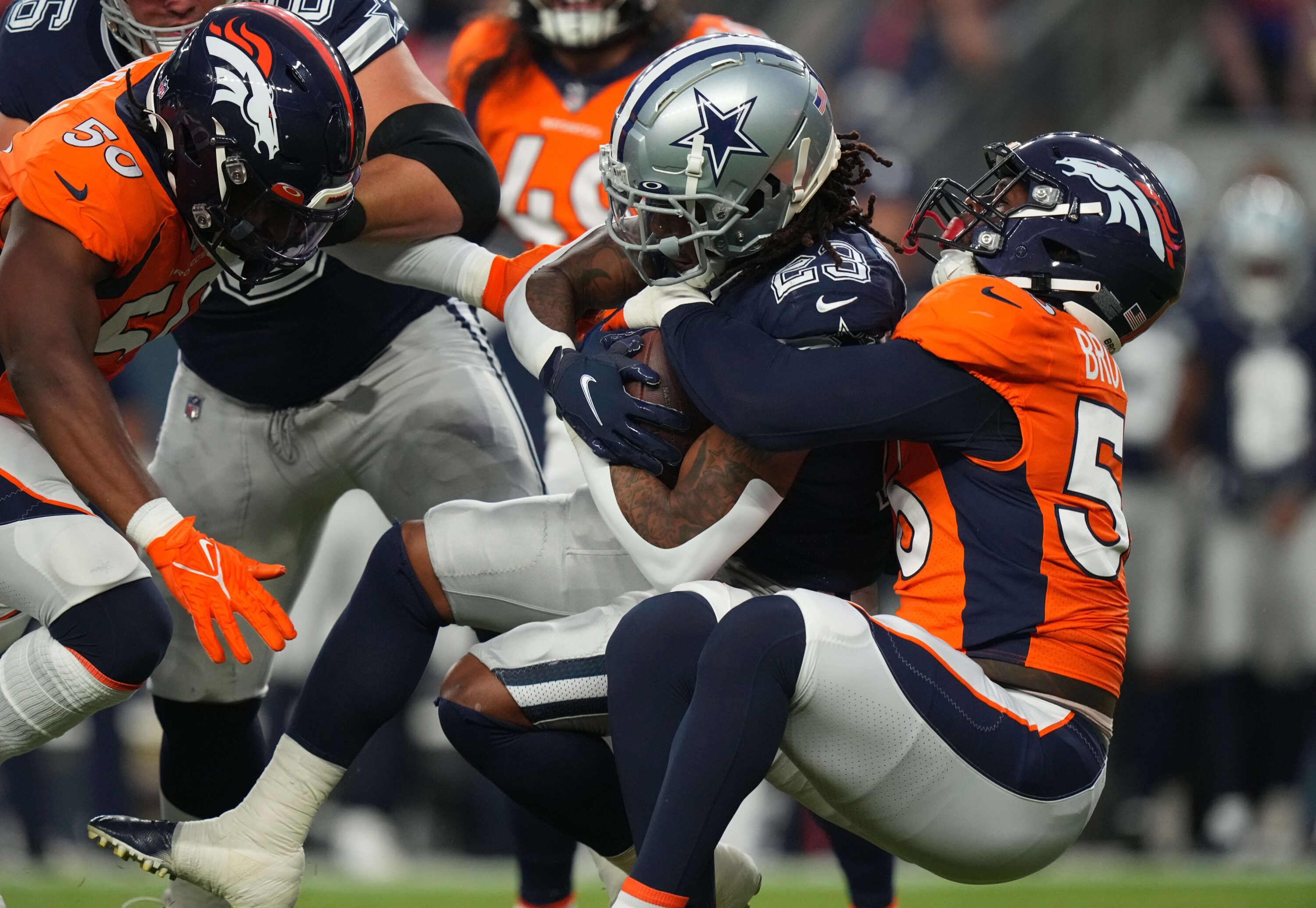 DENVER, Colo. — The Broncos are BACK!

The Denver Broncos beat the Dallas Cowboys 17-7 Sunday night in both teams’ preseason-opener at Empower Field at Mile High.

The game started slowly with a string of three-and-outs but the Broncos picked up some steam late in the first half, which was enough to carry them to a win. The Cowboys’ 17 penalties didn’t hurt either.

Baron Browning blows up the ‘Boys

First of all, Browning was a monster on Saturday.

On the first play of the game, he burst around the edge to stop an inside run behind the line of scrimmage. By the end of the game, he’d added a sack, a swat and a hit to the stat sheet. He lived in the backfield.

“He was around the quarterback quite a bit,” Nathaniel Hackett said. “Got a sack, a couple of tackles, pass breakup. His acceleration on the ball—ability to bend on the edges—is really good to see. He came out and played free. I thought it was awesome to see and we will evaluate him more, but he’s doing a great job.”

But part of the reason that Browning racked up those stats was that he played throughout the entire game. Given the risk of injury, it was surprising to see Browning on the field in the fourth quarter.

Despite a couple of early three-and-outs, the Broncos’ offense got hot behind quarterback Josh Johnson.

The 36-year-old journeyman started the game and played the entire first half. He completed 16 of his 23 attempts for 172 yards. He also hit Seth Williams and Kendall Hinton in the end zone for touchdowns. The 24-yarder to Hinton required perfect placement over the defender to give his receiver a chance.

“I thought he was really patient with his footwork and was able to get the ball out on time and the wide receivers were able to get just enough separation to be able to get some catches, which I thought was great,” Hackett said.

The receivers were another bright spot.

Jalen Virgil caught a couple of deep balls and finished with 83 yards.

Brandon Johnson bounced back from a couple of early missed opportunities to provide 64 yards on four catches.

“All those guys I thought did a fine job,” Hackett said. “We were able to throw the ball down the field. We were able to do some precision routes too. Those guys got a couple first downs. I thought they all did a really fine job. It’s going to be great competition.”

While the passing game was everything you could have hoped for, the running game left plenty to be desired.

Neither of the Broncos’ top backs took the field and Mike Boone, the number three back, only carried the ball three times. Those carries combined for -1 yard and he also dropped a third-down pass.

By the end of the game, the Broncos had 39 yards on 22 carries. The longest run of the night was six yards.

“That run game was not good enough,” Hackett said. “It’s that simple. I’m not happy with that. We need to evaluate what we’re doing, how we are blocking it, who’s blocking it, and we are not going to be able to consistently win without getting that run game going.”

The good news is that the running game will look much different, since the top two backs and four of the five projected starting linemen never saw the field.

PJ Locke picks off a pass

In the first quarter, the Cowboys tried to convert a fourth-and-two.

Cooper Rush dropped back to throw, drove a ball to Jalen Tolbert in the flat and PJ Locke jumped the pass for an interception. The play didn’t matter much since it was fourth down—the Broncos would’ve gotten the ball in better field position if he swatted it away instead of catching it—but it showed off the young safety’s talents.

“Today, right after we had [offense and defense] meetings, me and Caden Sterns were in the training room doing some recovery and watching film, and we saw that exact same set,” Locke said. “As soon as I saw the formation, I was like, ‘OK, yeah.’ So I was basically just trusting myself and just jumped in. And there was I was.”

Another safety, Jamar Johnson, also had a chance at an interception that was falling into his lap but a tight end was flying across the field and cracked him as soon as the ball hit his hands. The ball fell incomplete.

We saved the worst for last.

Jonas Griffith, a 25-year-old inside linebacker who is expected to start next to Josey Jewell, was injured on the second play of the game. The Broncos say the injury was to his elbow.

He spent a couple of minutes on the field before walking off the field with trainers.

“We are evaluating him right now, so we will get that [update] a little bit better tomorrow,” Hackett said after the game.

Griffith was one of four starters to play in Saturday’s game, along with right tackle Calvin Anderson, tight end Albert Okwuegbunam, and outside linebacker Malik Reed, who is considered a starter because of Randy Gregory’s injury.