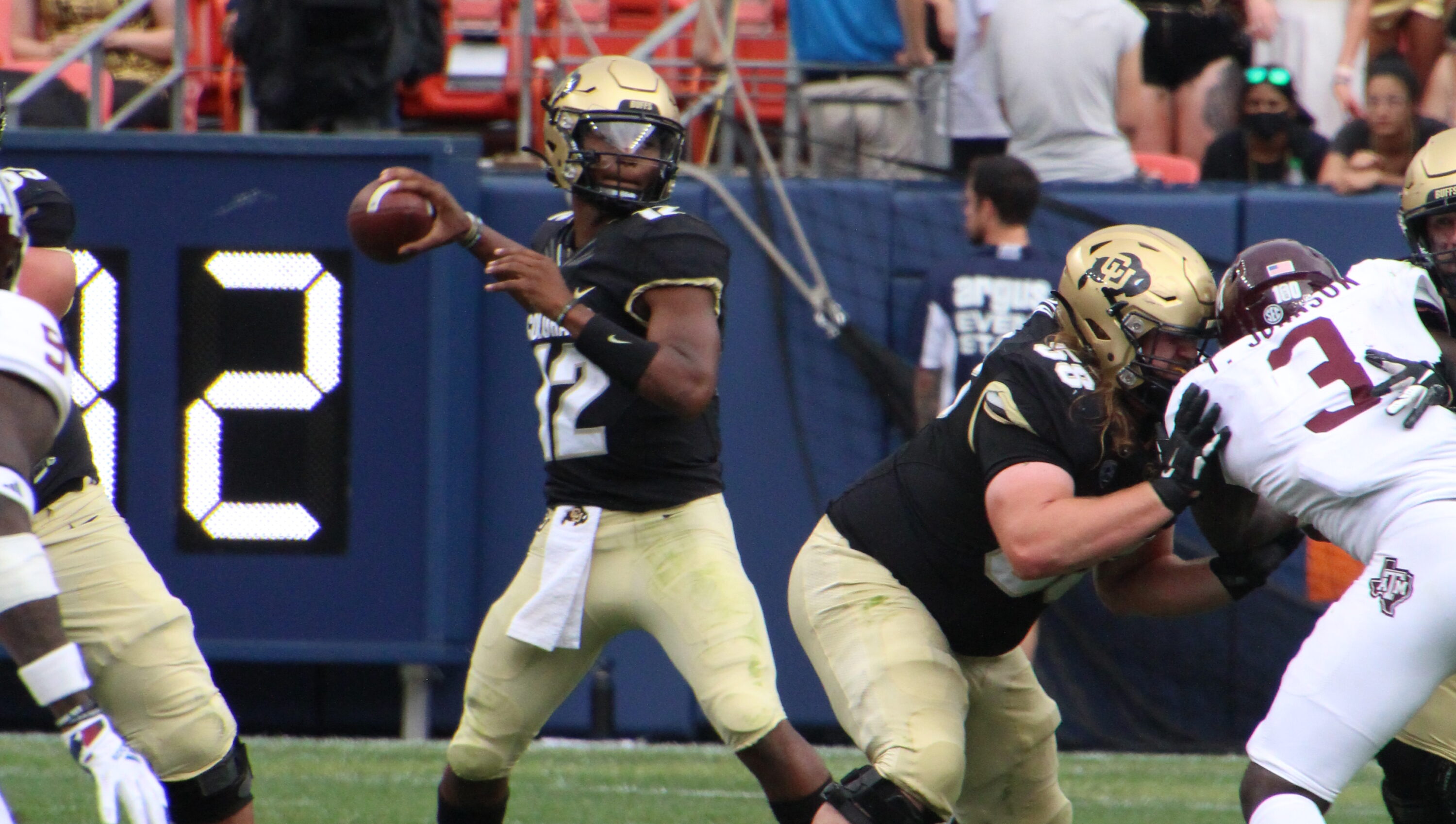 Colorado fell to No. 5 Texas A&M in what could have been one of the biggest upsets of the 2021 season. Instead, the Buffs will look for silver linings.

The defense was incredible, while the offense failed to hold up its end of the bargain. The task was made tougher when star running back Jarek Broussard was injured early in the third quarter and didn’t carry the ball in the second half.

Here’s what a second (and third, fourth and fifth) review of the game brought light:

Brendon Lewis was far from perfect in his first start.

While he avoided turnovers and made very few bad decisions, Lewis took way too long to get the ball out of his hand. On average, it took 4.78 seconds for Lewis to throw the ball, the longest time in the country among 163 quarterbacks with at least five dropbacks, according to Pro Football Focus.

In Week 2, Lewis moved much more quickly. On average, he threw the ball in 2.65 seconds, placing him just faster than the national average.

In particular, Lewis improved when he was unpressured. After taking 3.24 seconds in Week 1, he took 2.32 seconds when there was no pressure in Week 2.

That’s what we wanted to see.

But he wasn’t always as quick as you’d like, which is to be expected from a quarterback in his second start.

Take the final offensive play of the game, for example. The Buffs faced a 4th & 13 and needed to pick it up to have a chance to win. Lewis hit Dimitri Stanley and Stanley couldn’t make it to the sticks.

But if Lewis had gotten the ball out quicker, Stanley would’ve been able to turn upfield and had a chance to pick extend the drive.

Another example is a second-down throw to Brady Russell earlier in the game. Lewis was late with the pass and, more importantly, he left the ball behind Russell so his step advantage was lost.

And here’s Russell just before the catch. 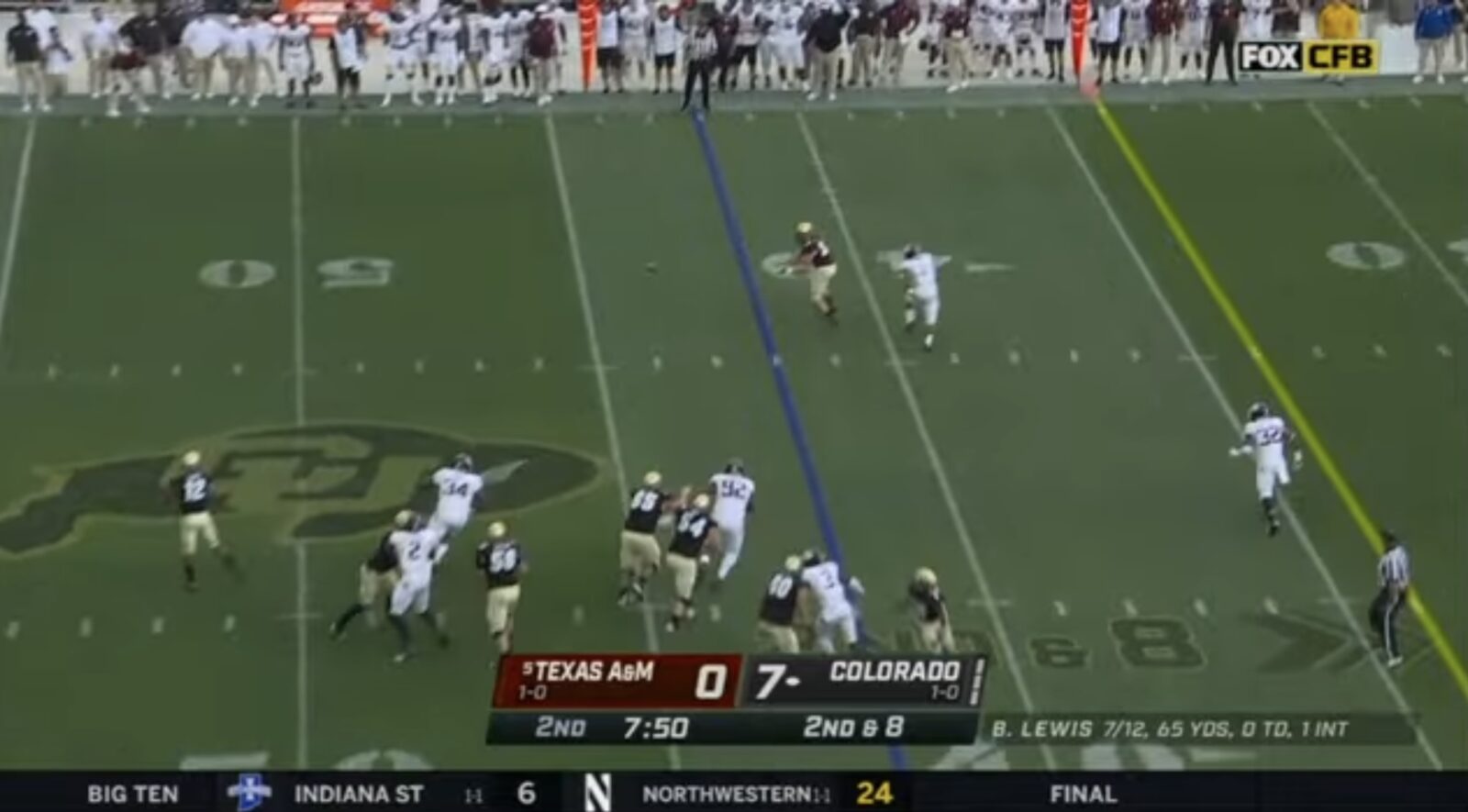 It would have been a short gain regardless, but five yards is a lot better than one yard.

Lewis took a step in terms of getting the ball out quickly, but he needs to take another. His accuracy was decent, but he was unable to keep a couple of receivers in stride, and a couple of balls sailed higher than would be ideal.

The good news is that Lewis is incredibly efficient in the middle of the field, a high-traffic area. The bad news is that there is a very clear trend.

Another note on Lewis: while his play style lends itself to play-action—he’s mobile, likes to get outside the pocket and he has a strong running game around him—he still hasn’t been successful. He’s attempted eight play-action passes over the past two weeks and he’s only completed two of them for 25 yards. That’s something to keep an eye on moving forward.

And one last thing: the deep shot to Daniel Arias was a good ball. It was under thrown, yes. But that’s alright. Overthrown is not. Some quarterbacks might even intentionally under throw the ball a little, to decrease the likelihood of a miss and to bring a pass interference call into play.

Simply put: This needs to be a catch.

Colorado dug deep into the transfer portal over the offseason and the biggest name they pulled out is former Oklahoma linebacker and safety Robert Barnes.

Barnes missed Week 1 with a soft tissue injury but played extensively in Week 2. The injury is 100% healed, according to Barnes.

“It was an exciting game, exciting environment,” Barnes told DNVR on Wednesday. “I felt like us as a defense was just clicking. That’s all we kept saying to each other. We’re just having fun.”

Colorado played 69 snaps on defense on Saturday, and those snaps were split among three inside linebackers. Nate Landman was on the field for every play, Robert Barnes played 26 and Quinn Perry played 13.

The Buffs used Barnes in a variety of roles, including playing man coverage on running backs and tight ends and running the middle of the field in Tampa 2.

“I like to look at myself like a Swiss Army knife type of guy that can do whatever they need me to do,” Barnes said. “I go into the game with a lot of confidence knowing I can trust my coverage skills, trust my playing in the box ability, just being able to go out there and make plays.”

Barnes was targeted five times and he gave up three catches for 10 yards. One of those catches was a third-down conversion on A&M’s game-winning drive, but look at how well Barnes contested this pass on a curl out of the backfield. It was just a perfectly placed ball.

The coverage really couldn’t have been any better.

It was a solid debut for Barnes, who will be a key piece for CU going forward next to Nate Landman.

“I feel like we click well,” Barnes said. “Him being able to have that speed type of guy next to him—able to cover backs and he can do his thing—is important. It was a really fun experience.”

Landman, by the way, was as dominant as ever with 10 solo tackles, two of them for a loss and two pass breakups. Plus, seven of his tackles were considered “stops” by PFF, which means the offensive player didn’t pick up 50% of the needed yardage if it was first down, 75% on second down or the first down on third down. (Outside linebacker Guy Thomas put up five stops and Christian Gonzalez was the only other CU defender with multiple stops.)

Christian Gonzalez is a stud

It’s official: Christian Gonzalez is one of the Pac-12’s elite cornerbacks.

Who knows… maybe by the end of the season he’ll be one of the elite defenders.

The only thing standing in his way is volume.

If Gonzalez does what he did on Saturday over the course of the season, there’s no doubt he’ll be considered one of the top corners in the game (but there will absolutely be doubts about whether he’d return to school after the 2022 season instead of turning pro).

In the first half, Gonzalez was in man coverage on a few third-down throws and forced incompletions.

On this one, Gonzalez mirrored a receiver all the way across the field on a crosser and was in perfect position to make a clean breakup.

On this third down, Gonzalez (#3) has to cover a slant route with a rub. He’s able to slip under the oncoming receiver and stay perfectly on the receiver’s hip throughout the route and he eventually forces the incompletion.

On Wednesday, defensive coordinator Chris Wilson told reporters that the growth in Gonzalez’s game stems from his focus on refining his technique since the end of last season.

“He’s always had a great skill set, but I think he’s realizing talent alone doesn’t take you to that next step, his attention to detail is the way,” Wilson said. “He has a process. He’s very methodical and he’s very fun to watch as a coach. It’s almost like having a coach on the field. He plays on an island so he understands the importance os his technique and his effort every week.”

Mekhi Blackmon was also on fire on Saturday, but that isn’t really news at this point. It’s probably too early to call CU’s corners the best duo in the conference, but they could stake that claim over the next 11 weeks.

“We play man here and we’re not scared of anybody,” Gonzalez said.

Before Colorado played A&M, Karl Dorrell said that the 1As would continue to rotate with the 1Bs across the offensive line. But only one player came in off the bench, compared to three in Week 1.

The starting lineup was:

Saturday was by no means a dominant performance by the offensive line, but it wasn’t all that bad either. The tackles struggled more than the interior lineman and more movement is likely at those positions.

Frank Fillip, who started at right tackle last year and was the favorite to start at left tackle this season, could be back from injury as soon as Saturday. Colorado may be hesitant to put him into the starting lineup right off the bat, but he’ll likely slide into one of the tackle spots in the near future. That leaves one job for Wray, Wiley or, possibly, Lytle.

Fillip’s return should help solidify the edges, while competition continues in the interior.