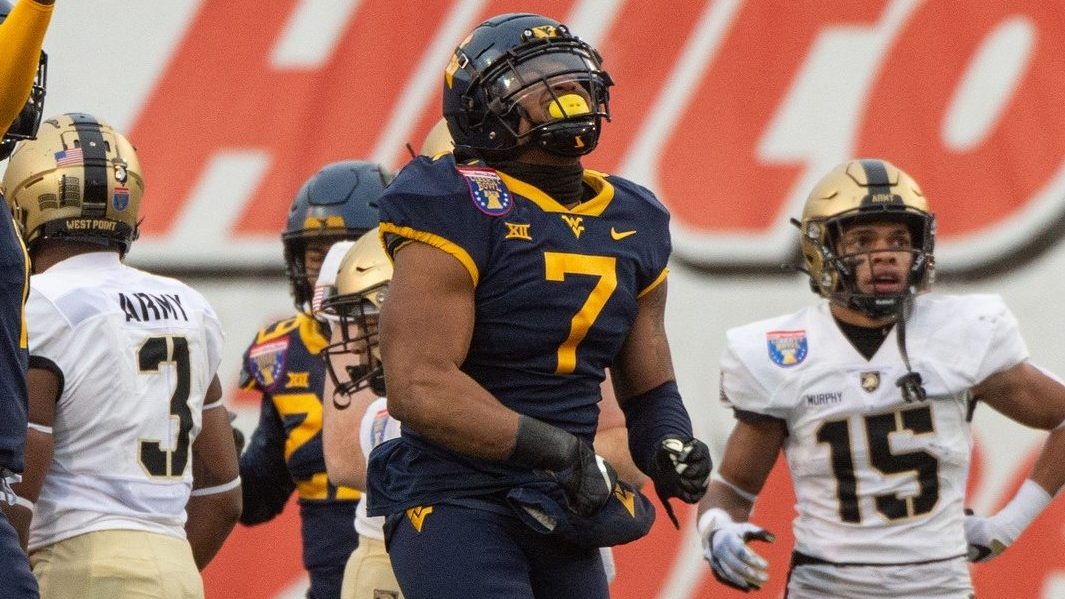 Buffs Film Room: How valuable can Josh Chandler-Semedo be for the Colorado defense?

BOULDER — Is there a new top dog on the CU defense?

Josh Chandler-Semedo arrives in Boulder with 31 Power 5 starts and 260 tackles under his belt. He never found his way onto an All-Big-12 team while he was at West Virginia though, peaking with a pair of honorable mentions including one last year for his 110-tackle performance.

So, can Chandler-Semedo by a star for CU?

The growing college sports and recruiting site specializes in Name, Image and Likeness reporting. It breaks news on deals and provides market-rate valuations for recruits and current college football and basketball players alike.

On3 is in the process of revealing its top 300 players in college football ahead of the 2022 season, and it started by sharing its top 10 players at every position. On Wednesday, On3 announced its top linebackers and a familiar name appeared at No. 5.

Can Josh Chandler-Semedo actually be one of the five best linebackers in the country?

Can he at least be an All-Pac-12 performer?

Does he even have a firm grasp on a starting job?

Let’s dig into the West Virginia @ TCU game from last fall to find out.

We’re starting with the bad: Josh Chandler-Semedo is 5-foot-10 and 226 pounds… and sometimes it shows.

Chandler-Semedo (#7 with the double wrist bands on both arms) will occasionally get caught on blocks from offensive linemen and be pushed backward.

Even if he isn’t pushed back, he’s never going to knock linemen backward himself. On this next play, if he could’ve held his ground the runner would’ve been forced to cut upfield harder and a tackler probably would’ve gotten to him sooner. A couple of yards would have been saved. If he could’ve popped the lineman a little, he may have closed the hole altogether.

On the next play he gets eaten up by the lineman and can’t quite shed the block and slow down the running back.

Each of these first handful of plays leaves you wondering “what would Nate have done there?”

The answer is that Nate Landman probably would have been more effective in all of those situations. If you try to look at Chandler-Semedo as a potential one-for-one replacement for Landman, you’re not going to be in love with what you see. But that’s okay. They’re two different players with two very different sets of strengths and weaknesses.

Even as a run defender, Chandler-Semedo is easy to get excited about. He’s incredibly quick for his position and he’s able to slip by blockers effectively, like on this fourth-and-short.

For the most part, his shiftiness makes up for his lack of size. While he isn’t going to win every fight—if a lineman gets hands on him, it’s going to be an uphill battle—he’ll probably win as many as he loses.

As a tackler, he’s more of a drag-down or wrap-and-roll tackler than he is a true hitter type like Landman, who can stop a runner in his tracks and knock him backward. Chandler-Semedo may give up a few extra yards on the backend of runs over the course of a game, but he doesn’t whiff often, thanks in part to his spider-like arms. He only missed on 9.9% of his tackle attempts last season, which is better than every Buffalo with significant tackle totals, other than Isaiah Lewis (8.9%) and Robert Barnes (9.8%). For reference, Landman missed on 15.1% of his tackle attempts and Quinn Perry missed on 14.1%.

He’s quick in pursuit as well.

Even if Chandler-Semedo isn’t Landman in the running game, he should still step in as the best run-defending linebacker on the CU roster immediately. He’s more of a sure-handed second-level defender than he is an explosive playmaker in the running game, but that’s a valuable piece for a young defense and an upgrade—although it may be slight—over the current options.

In coverage, Chandler-Semedo combines exceptional quickness for his position with veteran instincts and polish. Pro Football Focus graded him out as the fourth-best cover linebacker in the Big 12 last season and his 63.9 passer rating allowed was the third-best among linebackers with at least 100 downs played.

Look at the poise Chandler-Semedo shows in this next clip.

It’s third down. The offense needs five yards. So he sits at the sticks and mirrors his man horizontally. A younger linebacker may see that he’s lined up across from a slot receiver who’s driving hard inside and overcommit to the slant, leaving the hitch open. But Chandler-Semedo stays in perfect position and doesn’t break a sweat.

When Chandler-Semedo is in coverage, it feels like he’s in control. He’s almost never running. He knows where the receivers are going. It’s the poise that stands out.

In this next clip, Chandler-Semedo is once again guarding a slot receiver. It’s a touchdown, but not because of him.

Once again, Chandler-Semedo is in perfect position for the entire play. He doesn’t move his feet until there’s no way the receiver can cut in front of him. He doesn’t try to stay on top of the receiver because he knows the end line is his friend. And then he glues himself to the receiver’s hip as he runs himself out of the play. It’s textbook stuff. Incredible patience. And, once again, he doesn’t break a sweat.

In the next clip, Chandler-Semedo is covering a drag route but bails from his coverage responsibilities to meet the quarterback as he rolls out of the pocket. It’s tough to tell whether that was the correct decision.

On the one hand, allowing the completion doesn’t hurt the team all that much. It’s third down. The offense needs almost 20 yards. There are defenders waiting to make the tackle. And if the linemen hadn’t gotten to the quarterback, Chandler-Semedo provided insurance that he couldn’t extend the play and wait for a receiver to come open.

On the other hand, the linemen do force the quarterback to throw the ball and the field goal attempt becomes 15 yards shorter.

Was it a bad decision? I’m not sure. But if it was, then it was one of the very few he made in coverage in this game.

This next play is another.

You can’t see the play perfectly (thank you ESPNU for showing a replay during the snap) but Chandler-Semedo is a hole defender in Cover 3. He drops and forces the slot receiver to run outside him, but the slot cuts back inside and catches the pass.

In a Cover 3, the middle of the field in front of the free safety is the weak point. When the opponent takes advantage of that weak point, you can only tip your hat. But this shows that Chandler-Semedo isn’t perfect. He could’ve felt the in-breaking route and responded but he didn’t. Expecting him to be successful on every play is unrealistic.

Also: It’s tough to evaluate Chandler-Semedo’s man coverage ability, because West Virginia played almost exclusively zone. Only 6% of his cover snaps came in man. He has the traits to excel but we just can’t say for sure.

Chandler-Semedo should be one of the better cover linebackers in the Pac-12 this season. He’ll combine with Robert Barnes to create a combo that could compete for the best cover duo in the conference, if all goes well.

Where does he fit in?

The big question is what position Josh Chandler-Semedo will play in Boulder. Most of his work came as a middle linebacker, but he moved around quite a bit. He was a weakside backer early on in his career, which took advantage of his ability to play in space. As you saw above, he played quite a bit in the slot, which could mean he fits in at the STAR position at CU on occasion. He also lined up on the line of scrimmage occasionally like a nine-tech.

(Nothing notable happened when he lined up on the edge against TCU so this is a random example.)

Assuming CU runs a 4-3 base defense as expected, the likely starters before Chandler-Semedo’s arrival were Quinn Perry, Robert Barnes and Marvin Ham II.

Perry is the run-stuffer who fits best at middle linebacker.

Barnes is the former-safety who was likely to start on the weak side where his cover ability can shine in space.

Ham was my pick to start on the strong side because he has more versatility than the other two, at least based on what we saw last season.

Chandler-Semedo could play any of those positions and is probably the Buffs’ best option at each of them. It’s anybody’s guess who is relegated to the bench.

I’d also note that the schemes will change on a week-to-week basis.

Against an Air Raid team, it may make more sense to start Chandler-Semedo over Perry, who provides the least cover ability. Or maybe they’ll pull a linebacker off the field entirely and keep Perry to be a pure run-stuffer so Chandler-Semedo can focus on defending the pass.

Against an opponent that likes to play a more physical brand of football with extra tight ends on the field, CU could go heavy to match them by trying Chandler-Semedo at STAR.

Imagine if 6-foot-9, 400-pounder Daniel Faalele was still with Minnesota instead of the Baltimore Ravens. CU might try Chandler-Semedo on the edge because his quickness could be the best way to beat the heavy-footed tackle instead of a mauling type like Guy Thomas who would likely be overpowered.

The options are endless.

In terms of expectations, the bar should probably be set at an All-Pac-12 honorable mention level. He’s played at an honorable mention all-conference level in the past and so more of the same is most realistic.

In terms of hopes, you could set the bar at best CU defender and a full-blown All-Pac-12 performer.

In terms of max potential, I’ll buy the hype and agree with the crew over at On3; there’s no reason Chandler-Semedo can’t be a top 10 linebacker in the country this season.