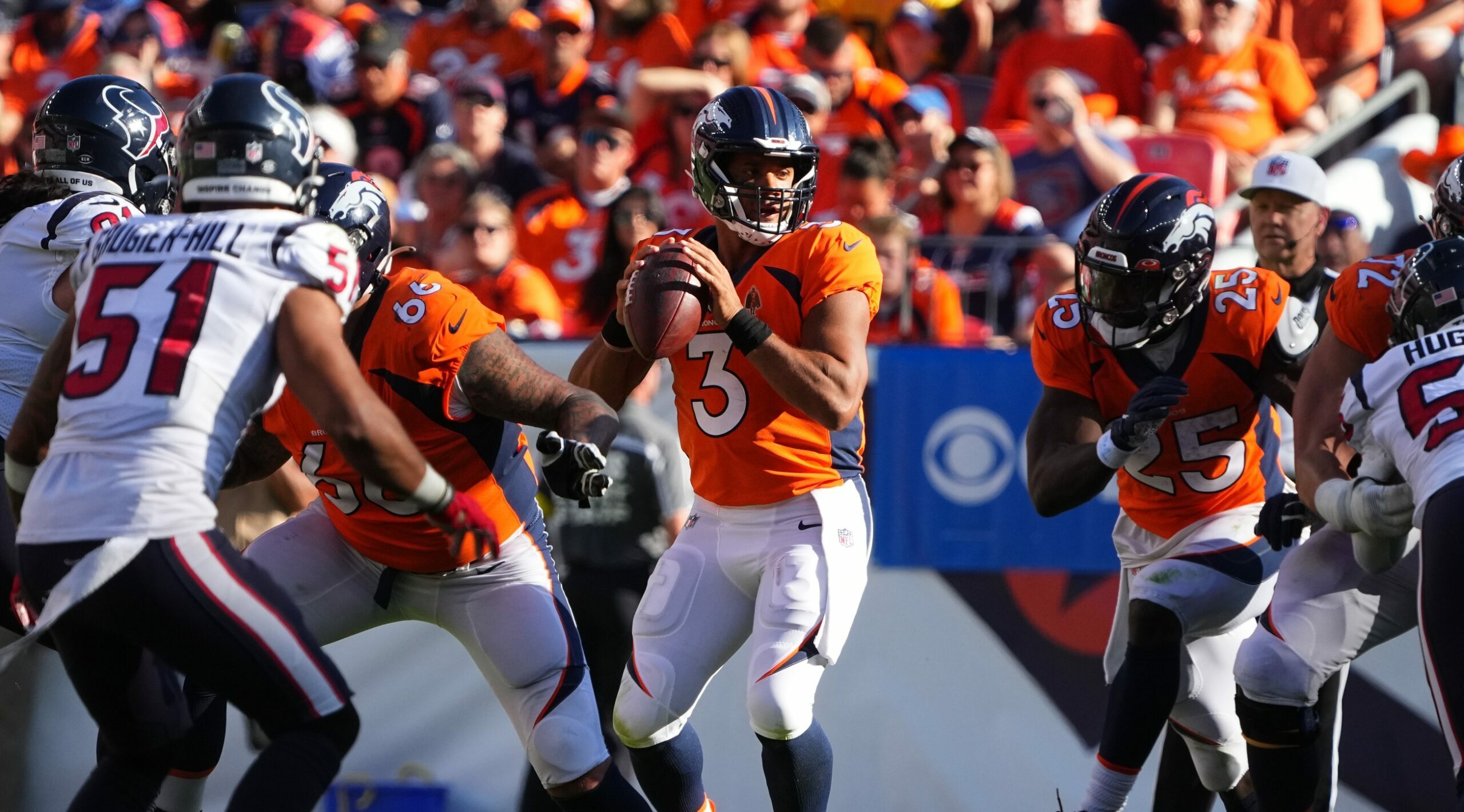 ENGLEWOOD, Colo. — The Denver Broncos’ new look offense under Nathaniel Hackett and Russell Wilson has had no problem moving the ball at will in their first two games.

Denver is first in the league in yards per drive (45.3), according to Football Outsiders.

The Broncos have the seventh-most offensive yards in the NFL (783).

Yet, Denver’s 16 points per game is the ninth fewest in the NFL.

The reason is because, so far, the red zone has been a red light for Denver’s offense.

For the Broncos to get their points per game to match their top-of-the-league offense, in terms of moving the ball, they’ll have to cash in and turn the red zone into the gold zone, as Hackett likes to call it.

“I think that there is some good news in it. It’s not all bad news,” Wilson stated on Wednesday, when asked about the offense’s struggles in the red zone.

“I think we’ve been down there six times; we’ve had two fumbles on the one. We were down there on the one and we obviously can’t do that,” Wilson said, detailing nearly every Broncos red-zone trip. “That’s two of the six and we had a quick touchdown to Courtland [Sutton]. That’s three of the six. That’s pretty good—that could have been pretty good. We had the little flip toss to [Andrew] Beck. That should have been a touchdown, but we went offsides, [which] can’t happen. That’s four of the six. The fifth one is probably the roll where I hit ‘E’ (Eric Tomlinson) on the sideline, and we were just barely out. That’s five of the six. Five of six isn’t bad. That’s how I look at it. It’s a game of inches, a game of discipline. It’s a game of doing things right and it changes the whole perspective of everything. Then we’re really kicking butt. The great thing is we are doing a lot of great things well. It’s just fine-tuning the details, and we have to get more touchdowns down there.”

What’s killed Denver even more in the red zone, as Wilson pointed to, is the two costly fumbles, one by Javonte Williams and the other by Melvin Gordon, against the Seahawks in Week 1. Without either, or both, the Broncos would have been in a position to win the game, even if they had just settled for field goals, let alone punched it in the end zone.

But neither running back held on to the ball. Neither Sutton nor Tomlinson got both feet in the end zone. And due to Sutton’s false start, Beck wasn’t able to steamroll in for six.

The captain of the offense believes the Broncos’ luck in the red zone is going to change. Soon.

“I’ve been fortunate to score a lot of touchdowns in the red zone and everything else,” Wilson stated with confidence on Wednesday, after stating good red-zone fortune is coming soon to Denver. “It’s just—there are moments and there are plays that are just miraculous plays. There are plays that are just your easy ones [where] you walk in, or the guy is wide open. There are plays that are contested. We’ve had a lot of contested ones; we just barely didn’t get in there. I’m not concerned. I’m actually really excited because I think about where we can go if we just finetune that little piece and make those one or two plays here or there every game—I always call them game-altering plays. It makes a massive difference in the games.”

Through two games, the Broncos have a massive gap in their game-alerting plays in the red zone.

The Broncos have put themselves in a position to be a dominant offense. But they’ve treated the red zone as a red light.

Wilson believes that red light will soon turn green and they’ll cash in in the gold zone.