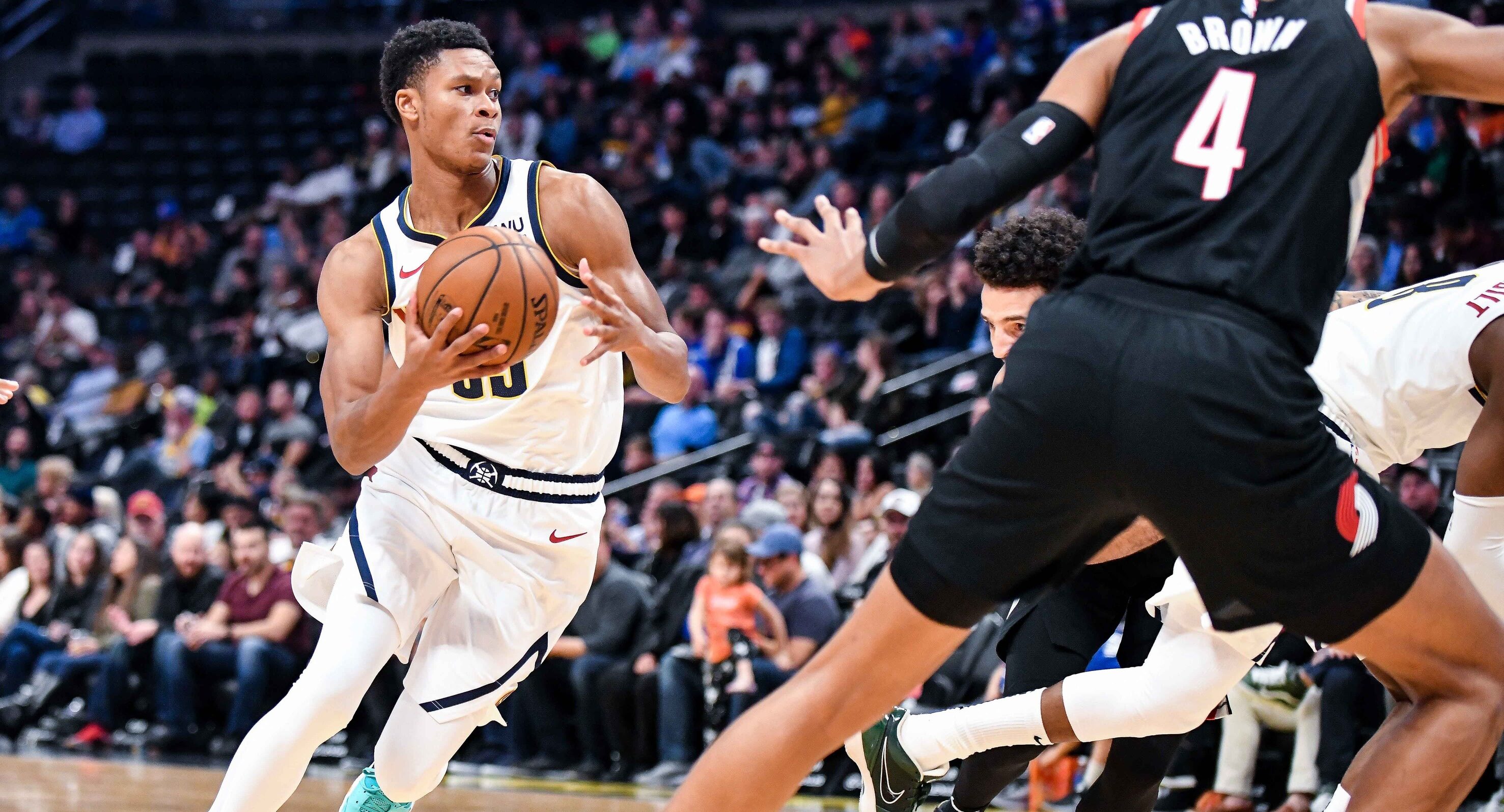 Why PJ Dozier is here to stay

Way back in January, before we knew that a novel virus would reshape our world and put the NBA season on hold, PJ Dozier made his Nuggets debut. He logged 12 minutes in a pleasing win over the Charlotte Hornets, scored 12 points and added four rebounds and two assists.

Michael Porter Jr.’s 19 points and eight rebounds off the bench overshadowed Dozier’s debut, but Michael Malone was sure to give Dozier his postgame due.

“Unbelievable attitude, great work ethic,” Malone said, describing Dozier’s makeup. “I was not surprised by anything he did tonight, and I mean that sincerely. I believe in PJ Dozier. He believes in himself, and all he needs is an opportunity.”

Before that Wednesday in January, Dozier dazzled in the G League on a two-way contract. He poured in 31 points, ten assists, and eight rebounds against the Long Island Nets in November. Three nights later, Dozier posted 25 points, ten rebounds, and five assists. And just four days before his Nuggets debut, Dozier tallied 32 points, eight rebounds, and nine assists.

Once Denver called Dozier up in January, he never played in another G League game. He probably never will again. The Nuggets are signing the 6-foot-6 guard to a multi-year contract, a league source confirmed to DNVR, to fill their final roster spot before the team travels to Disney World in two weeks. Shams Charania of The Athletic first reported the signing.

Denver can still sign another player to Dozier’s now-vacant two-way spot as well if they so choose. NBA teams can bring a maximum of 17 players to the Disney World bubble, and two-way players are reportedly eligible, so another signing will likely follow in the coming days.

Dozier is the latest overlooked and undervalued prospect that the Nuggets have uncovered. First, it was Torrey Craig, who the Nuggets plucked out of Australia, placed on a two-way contract, and a year later became a vital part of Denver’s playoff rotation. Then it was Monte Morris, a slight of frame pure point guard who rarely turned the ball over in college. Morris slipped well into the second round in the 2017 draft before the Nuggets scooped him up and signed him to a two-way contract. Today, Morris one of the better backup point guards in the league.

Is Dozier next in line? Some of his teammates believe he is.

“I was looking at him in training camp and when he was playing with Bol Bol,” Jokic said of Dozier. “He’s kind of tall. He can handle the ball. He’s a really good point guard. He can rebound. He’s really good at finding the pocket pass and cross-court pass, just because of his size, he can see. He can score too, and he’s kind of smooth. I like his game.”

Dozier was on the Nuggets’ radar long before he beat out big man Tyler Cook for Denver’s final two-way spot at training camp in October. A poor 3-point shot had been the black mark on Dozier’s profile throughout stops in Oklahoma City and Boston over the last two seasons, but he shot the ball well at Summer League, converting on 40% of his triples. The Nuggets were also fans of Dozier’s size, versatility, character, and were convinced he’d fit well in their locker room. Dozier was also willing to earn his spot and open the season on a two-way deal.

Once he got called up to the Nuggets this season, Dozier’s poise was continually impressive. PJ ‘Composure,’ as we’ve called him in this space throughout the season, didn’t play like a rookie. He wasn’t hesitant in his first NBA minutes or throughout the 21 games he appeared in for the Nuggets. Dozier wasn’t afraid to make a mistake or miss a shot. He played with incredible confidence for a 23-year-old who went undrafted out of the University of South Carolina in 2018 and played mostly in the G League over his first two professional seasons.

Dozier has good reasons for his confidence. He passed the eye test with flying colors this year. At 6-foot-6, Dozier gives the Nuggets something they don’t have at the point guard position. He can see over the defense and is an active and rangy defender who can sneak into passing lanes like no other lead ball-handler on the Nuggets can. Dozier also has a 7-foot-3 wingspan, adding to the length that Denver has brought in over recent years.

Dozier has an inerrant feel for the game too. He’s a smart player who can flourish in the Nuggets’ read-and-react system around Nikola Jokic and can also play multiple positions. He has a natural cadence and swagger in the pick-and-roll.

“He is an exceptional pick-and-roll player,” Malone said in January. “If you put PJ Dozier into a pick-and-roll, something good is going to happen, and you saw that tonight.”

The Nuggets had a lot of success with a Morris-Dozier backcourt over the second half of the regular season and registered a 9.5 Net Rating in just under the 100 minutes that those two played together this year. It’s not hard to envision plenty of two-point guard looks for Denver in the future, especially off the bench, but Dozier will have to improve his shaky 3-point shot. Because of his work ethic, the Nuggets are confident he will.

Overall, you can’t take much away from his numbers this season. For the year, Dozier averaged 4.1 points (39.6 FG%, 25 3P%), 1.4 rebounds and 1.4 assists in 11.1 minutes per game, but a few select moments from his season still stick out even though basketball hasn’t been played in 104 days. Dozier’s first NBA basket came via Jokic on a perfectly-timed cut right down the middle of the paint. He also logged 25 crucial minutes in Utah when a seven-man Nuggets squad without two starters and five of their top-10 rotation players beat the Jazz.

Somehow, the Nuggets’ draft and develop pipeline continues to stay flush with talent even though Denver is one of just two NBA franchises (Portland) without their own G League affiliate. I’m sold on Dozier, and unearthing him is another feather in the cap for Nuggets president of basketball operations Tim Connelly and his staff.

“He’s a part of the future. I talk to him all the time telling him to keep his head up and his time will come. He’s an NBA talent for sure,” Will Barton said in January. “Definitely a rotation guy in the NBA at worst.”