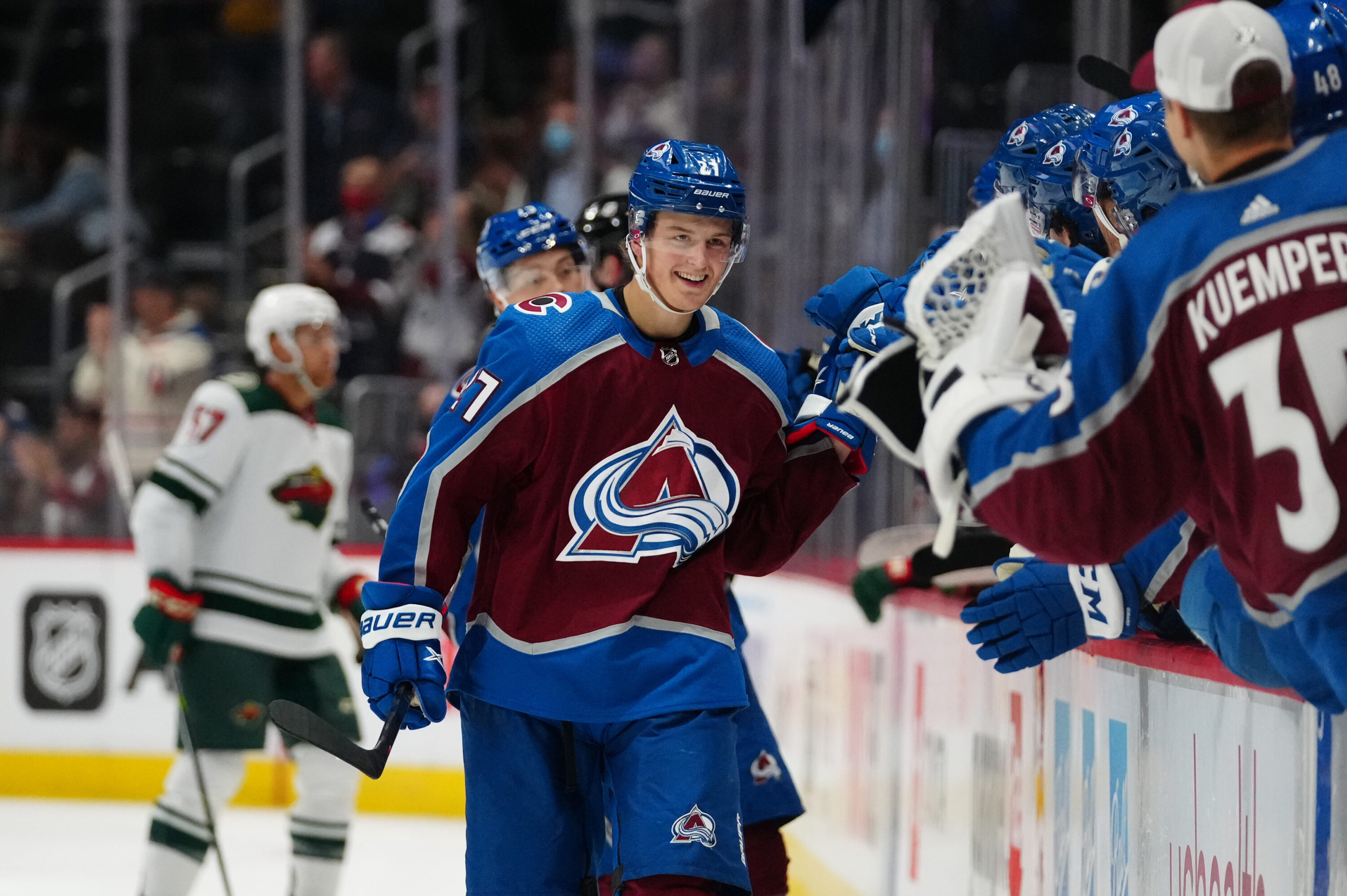 The prospects have completed Game 1 of the Rookie Face-Off tournament. Colorado captured a close 3-2 win in an exciting and at times whistle-happy game. The lines were exactly as expected with a top line of Oskar Olausson, Ben Meyers, and Jean-Luc Foudy. Meyers wore an “A” in the contest which falls in line with the leadership prowess he demonstrated in development and rookie camp. Justus Annunen got the start in net.

This was a strong period for Colorado. You could see that they were still learning about one another, and started to get comfortable in the second half. They controlled possession, and gained an advantage at the faceoff dot.

Colorado would trail first after LA’s Brandt Clarke got the puck down the right side giving Francesco Pinelli time to go low in the slot and whack Clark’s pass in over Annunen’s glove.

There was a little bit of miscommunication in Colorado’s end. Sampo Ranta went to check Clarke but not before he was able to fire the pass to Pinelli who was able to skirt around Nolan Orzeck too easily.

Fortunately, they continued to apply pressure.

Meyers won the offensive zone faceoff. Orzeck sent it to Olivier Boutin at the blueline who fired a shot up high. Olausson turned in front of his guy and got his stick down in time to skillfully deflect the shot in (tied 1-1). LA’s goaltender, Jacob Ingham, was well distracted by Meyers’ presence at the netfront (getting tangled with LA’s D), and was caught stick side.

In quick succession, Ranta gave Colorado their first lead of the game.

This play started and ended with Ranta. A behind-the-net play sent the puck up along the boards to Ranta who dished it to Tarun Fizer. The tandem carried the puck out of their zone and up ice with Beaucage leading the charge. Beaucage pressured the D to send a no-look drop behind him right to a flying Ranta coming into the o-zone. He took his time to carry the puck to the high slot, faked a shot and darted to the left circle to fire it post and in. LA’s D didn’t even try to engage Ranta who was able to move about at will. 2-1 at the end of the 1st period, shots 13-10.

We didn’t get a look at special teams until the second period. The flow of the game shifted more between both teams back and forth. When you look ahead at the special teams battle, it was ultimately a fine night for Colorado’s penalty kill and disappointing but not without hope for their powerplay. In this frame, the Avs went 0-3 on the PP and took two penalties.

Colorado dropped its only PK of the game at 9:44 in the second with 12 seconds remaining on the kill. Ranta lost his guy up high and Meyers was caught being too passive near the circle. LA’s Taylor Ward was all alone in the slot. He put his whole body into the one-timer and dropped to his knee. Annunen didn’t have a prayer there. LA and Colorado split their shots evenly this period, though the Avs had a slight edge from period one at 23-20.

The pace was really disrupted by stacked calls creating 4-on-4 situations with players coming in and out of the box. The powerplay unit moved the puck well – Olausson and Meyers on the first unit specifically seemed to read one another well. Meyers was bogged down by some finishing struggles but continued to create opportunities.

Their PK unit slotted in personnel with Meyers taking the defensive zone faceoffs and Wyatt Aamodt and Danila Zhuravlyov as key players. Ranta, Cameron Wright, Ben Tardif, Tarun Fizer, and Brayden Schmitt also got looks. I liked Aamodt on there especially because of what I saw in him at the end of the year in Loveland. He was on the PK through a handful of games in the playoffs where the Eagles penalty kill was an asset. He can keep it simple and lock it down.

At 6:35 in the third, Meyers served a minor hooking penalty which would set the stage nicely for his redemptive next play.

After a successful kill, Meyers was released. He worked the puck behind the net and protected it from two LA defenders with poise before leaving a pass along the boards for Wright to pick up and send to Schmitt at center point. Schmitt fired a shot through traffic and Meyers was able to redirect it in from the crease with 3:54 remaining. His hard work was rewarded and it was only fitting it earned him the game winning goal.

The final minutes played out with some close-call empty net attempts. Foudy prowled the o-zone after having the puck stolen from LA’s Clarke – a solid defenseman in this game. He circled Taylor Ward and forced a turnover using his speed and determination to keep play alive. The buzzer sounded and Colorado won 3-2 (shots 33-33, 0-5 PP, 4-5 PK).