Your team needs to get more good players.

It actually doesn’t matter which club you root for in MLB – or in any sport, really – because the statement remains just as true. It sure as hell doesn’t need to be pointed out to Colorado Rockies fans after an abysmal 2020 campaign.

That statement, taken by itself though, isn’t particularly helpful.

You’re just as aware that the team needs “more better players” as you are that they don’t have an unlimited budget or options or assets.

So, unless you are currently in favor of the full tear-it-all-down, nuclear rebuild, burn-it-in-the-woods-and-hope-a-glorious-phoenix-rises-in-the-ashes method, you’re simply hoping that Colorado can add some quality to the roster this offseason.

Because in order to be a good baseball team, you gotta hit, you gotta pitch, and you have to secure the 27th out.

The history of the Rockies tells us that more than any other team, they need to prioritize these elements in just the right way in order to achieve success.

Debate will rage on about the true quality of this team and the direction they should therefore take, but let’s circle back and first focus on an examination of one essential question that can guide us.

When the Rockies are good, what makes them good?

You might just as easily ask, “When the Rockies are mediocre, what made them mediocre?” or “When they are bad what makes them bad?” Answers to all of these questions begin to emerge by looking at the same data.

Fans and media alike know that they’ve been either bad or mediocre more often than they’ve been good since 1993. The focus about their 29th year has centered around emulating other small market successes like the Tampa Bay Rays or Oakland A’s or even the major market Chicago Cubs (guilty as charged).

Rather, the Rockies could look to emulate what has made them successful in each of the handful of times they’ve reached the postseason.

Colorado has unique problems to solve and so we can learn a lot by looking specifically at their own history and varying results of trying overcome those problems.

The Rockies have finished over .500 nine times in their 28 years of existence. The postseason followed in five of those seasons.

In order to understand why, given our established focus and parameters, we need to put three more questions on the table:

Did Hitting Carry The Rockies?

Did Pitching Carry The Rockies?

Did Balance Carry The Rockies?

The best stats we have available for measuring such broad questions about both sides of the ball are probably OPS+ and ERA+, provided by Baseball-Reference. You will get largely the same results with wRC+ if you prefer Fangraphs.

While we have discussed in great detail exactly how and why these statistics can underrate the Rockies – its the uniqueness of Coors Field – when comparing them to the rest of the league, they are solid constants for measuring them against themselves.

This dynamic becomes crystal clear when breaking down the first and most glaring difference in how these stats view the separation between offense and pitching in Colorado throughout their entire history.

In other words, this club has never been very good offensively.

In 1997, an offense featuring NL MVP Larry Walker achieved exactly league average production with an OPS+ of 100 and went 83-79.

In 2014, the franchise known for slugging put up their best hitting season ever with a whopping OPS+ total of 102… and finished an awful 66-96.

In neither of those Rockies above-average offensive seasons did they make the playoffs.

On the flip side, seven of the 12 above-average pitching seasons resulted in a record better than .500 and five of those led to the postseason. Seven times they’ve posted an ERA+ of 108 or greater, including all five trips to Rocktober.

Of course, this adds further evidence to the file that these stats tend to undersell Rockies’ hitters and oversell the impacts of their home ballpark. In order to gain a better understanding of this, we should try to make some adjustments accordingly. And so should the Rockies.

So let’s ask our first questions again using these numbers.

Did Hitting Carry The Rockies? 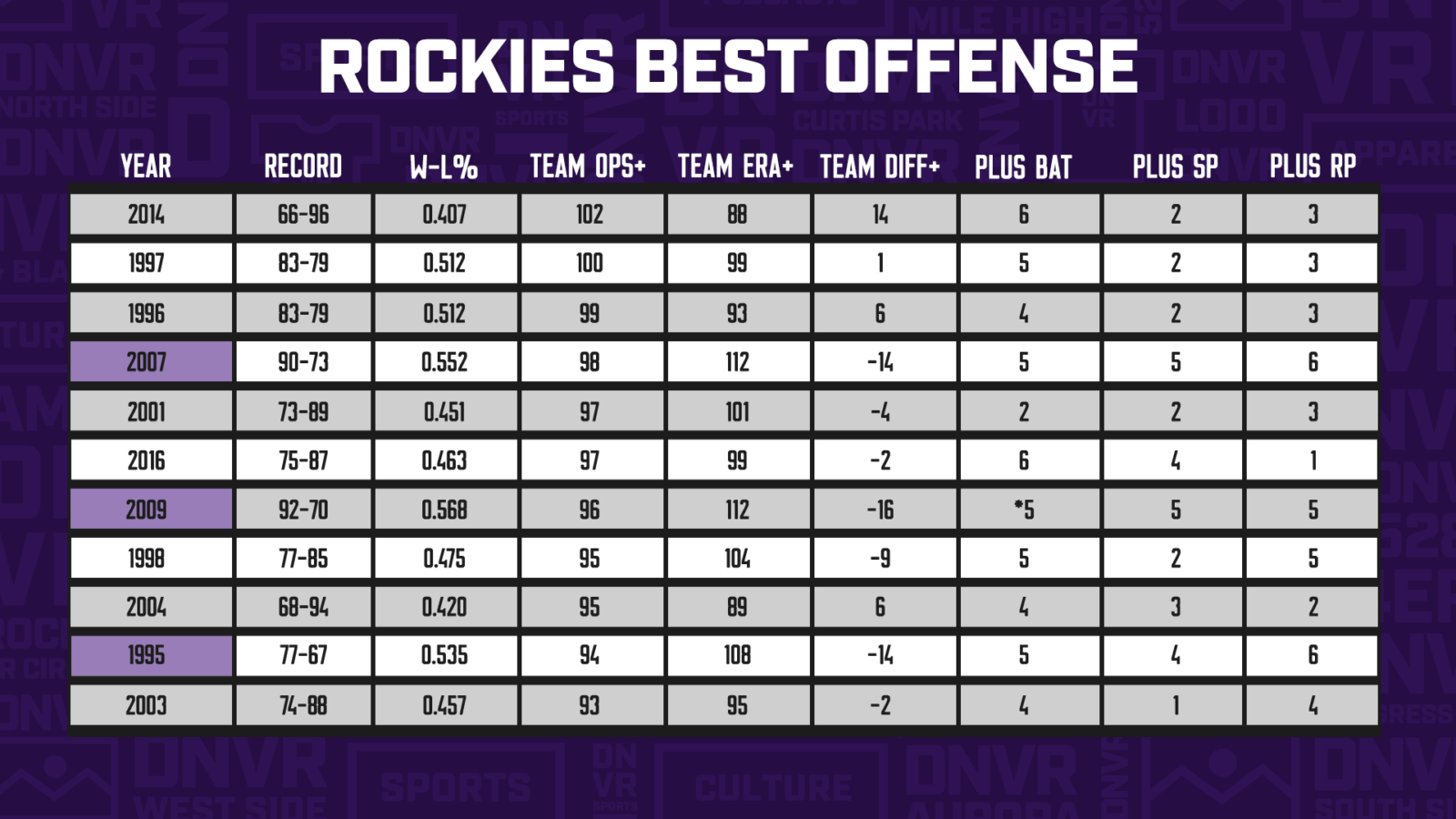 (Postseason years are highlighted in purple. Asterisks denote a mid-season acquisition that would bump the number up by one.)

Only five of the Top 12 OPS+ seasons resulted in plus .500 records and only three led to the postseason. And that’s including 1995 when the OPS+ was still not great at 94 and the pitching was still significantly better than the hitting at 108.

As discussed, in 2014 hitting “carried” the Rockies to 66 wins because the pitching was so awful it simply did not matter how well they hit. 2004 saw a less extreme version of this same principle at work.

The years 1996 and 1997 represent the peak of Colorado being an offense-first team. Mind you, these are the only four years in which the Rockies offense rated better than their pitching and two were total disasters.

In ’96 and ’97 though, you have plus .500 ballclubs who just narrowly missed out on the postseason powered by big bats. Both seasons saw the club produce just a pair of starting pitchers and a trio of relievers who managed to be above league average.

So despite Ellis Burks’ MVP caliber performance that was followed up by Larry Walker’s MVP winning performance, Colorado would not participate in October baseball.

Had Walker not broken his collar bone in 1996, you might have seen the only team in Colorado history to truly and unequivocally be carried by its offense into the postseason. Alas, it was not to be.

It could also easily be argued that just a tiny bit more help from their arms would have gotten either of those teams into the playoffs but that only further serves to highlight how difficult it is to be primarily boosted by the bat.

The Blake Street Bombers featured some of the best individual hitters and overall offenses in franchise history. Those teams could rake, but except for in 1995, they couldn’t pitch. And so, the best they could do was win 83 games.

Did Pitching Carry The Rockies?

In an ironic twist of fate, a win total in the low-80s appears to be both the ceiling for a great Rockies offense, and the floor for great Rockies pitching. 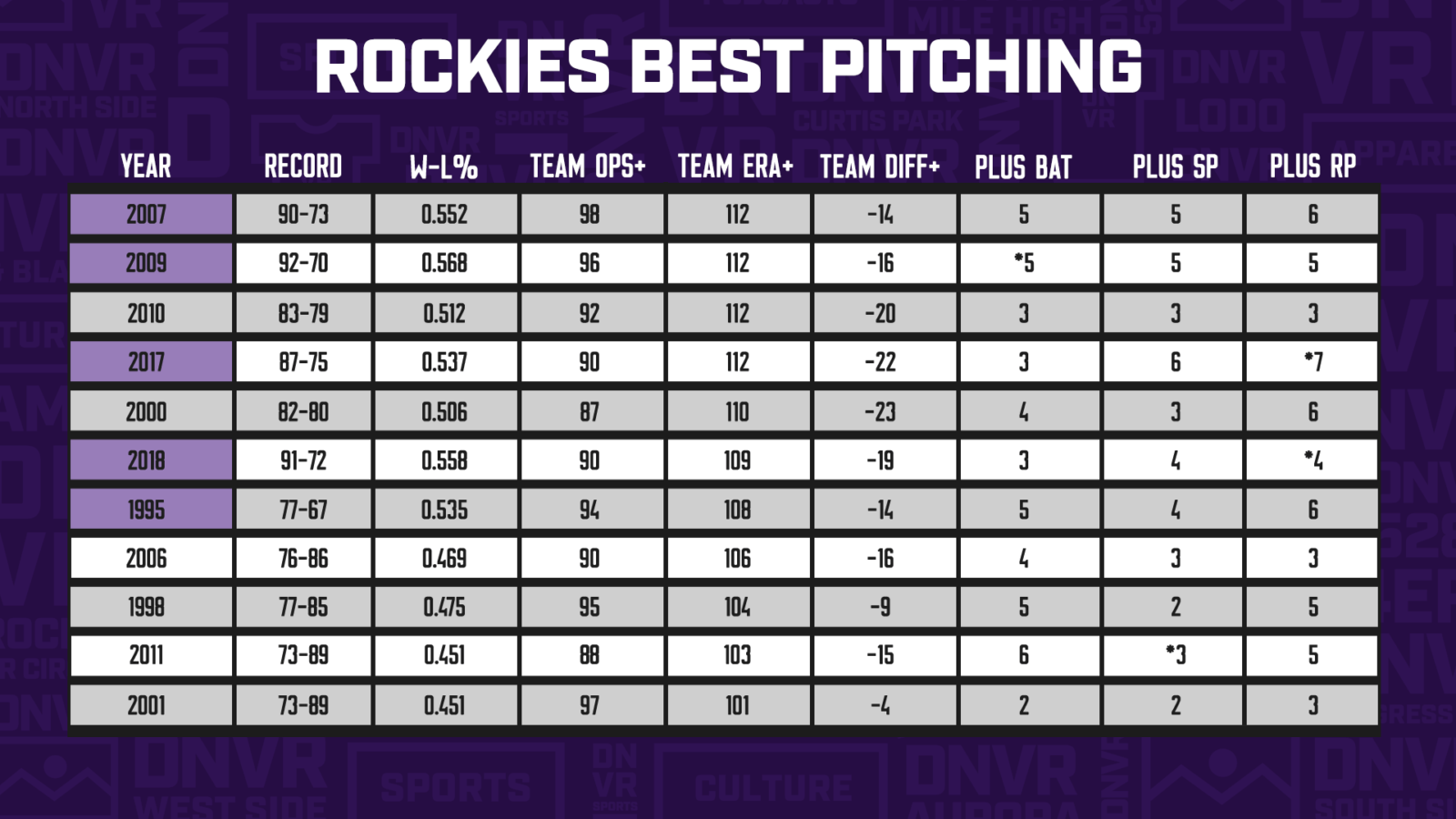 Similarly to how 1996 and 1997 represent the best the Rockies have done with good offense and bad pitching, 2010 and 2000 are their mirror opposites. In both campaigns, the pitching was excellent but the offense was to blame for coming up short.

Anyone watching at the time rightfully remembers 2010 as a team that should have punched their ticket to the postseason anyway but collapsed in the final few weeks largely behind some painful bullpen blowups.

The year 2000 is the most bitter pill to swallow in this category. Despite Todd Helton flirting with hitting .400 for most of the year, the rest of the offense was so bad that they managed to put up an OPS+ of just 87, tied for the second-worst mark in franchise history.

But… the pitching was so quality, especially the bullpen (110 ERA+), that the second-worst offense they’ve ever fielded still managed to win 82 games.

Did Balance Carry The Rockies?

Surely, you might be saying to yourself, we’ve created a false dichotomy. Of course, the Rockies need to pitch, but they also need to hit. It can’t be one or the other, right?

It’s true that the data shows thus far some floors and ceilings for both hitting and pitching. With the bats, dropping below a 90 team OPS+ does appear to be prohibitive. Helton and the 2000 Rox learned that the hard way.

A bad enough offense can derail the Rockies. It’s rare, though still possible.

So what about the teams that were more balanced across the board? 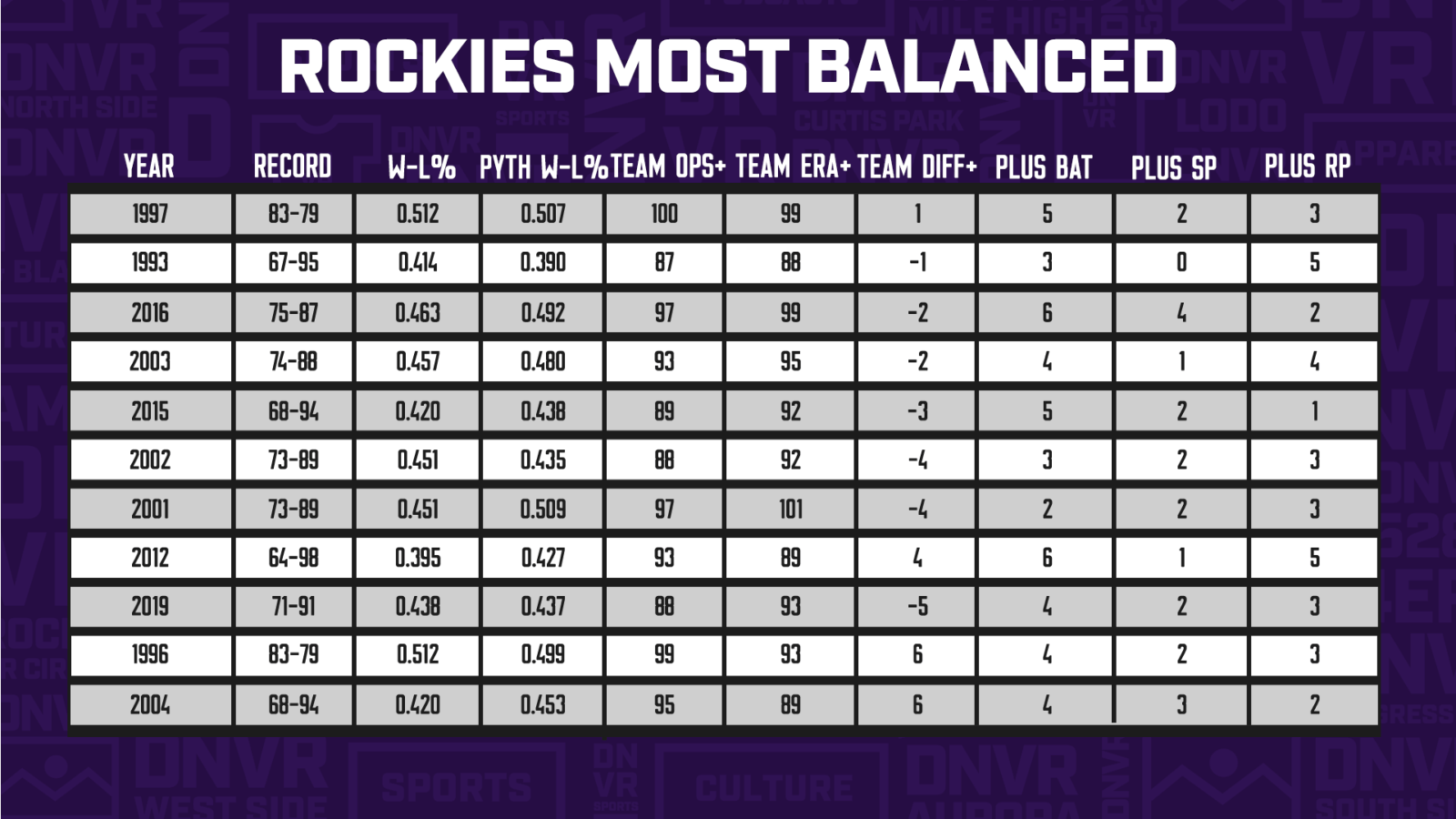 This may be the most staggering discovery of all.

In their 11 most balanced seasons, they made the postseason in zero of them. None. A big fat goose egg.

Four times (’97, ’98, ’01, ’16) they were well balanced and both the offense and pitching were above their franchise average. Only ’97 saw them finish over .500 with the other three years finishing with win totals in the 70s.

On the flip side… 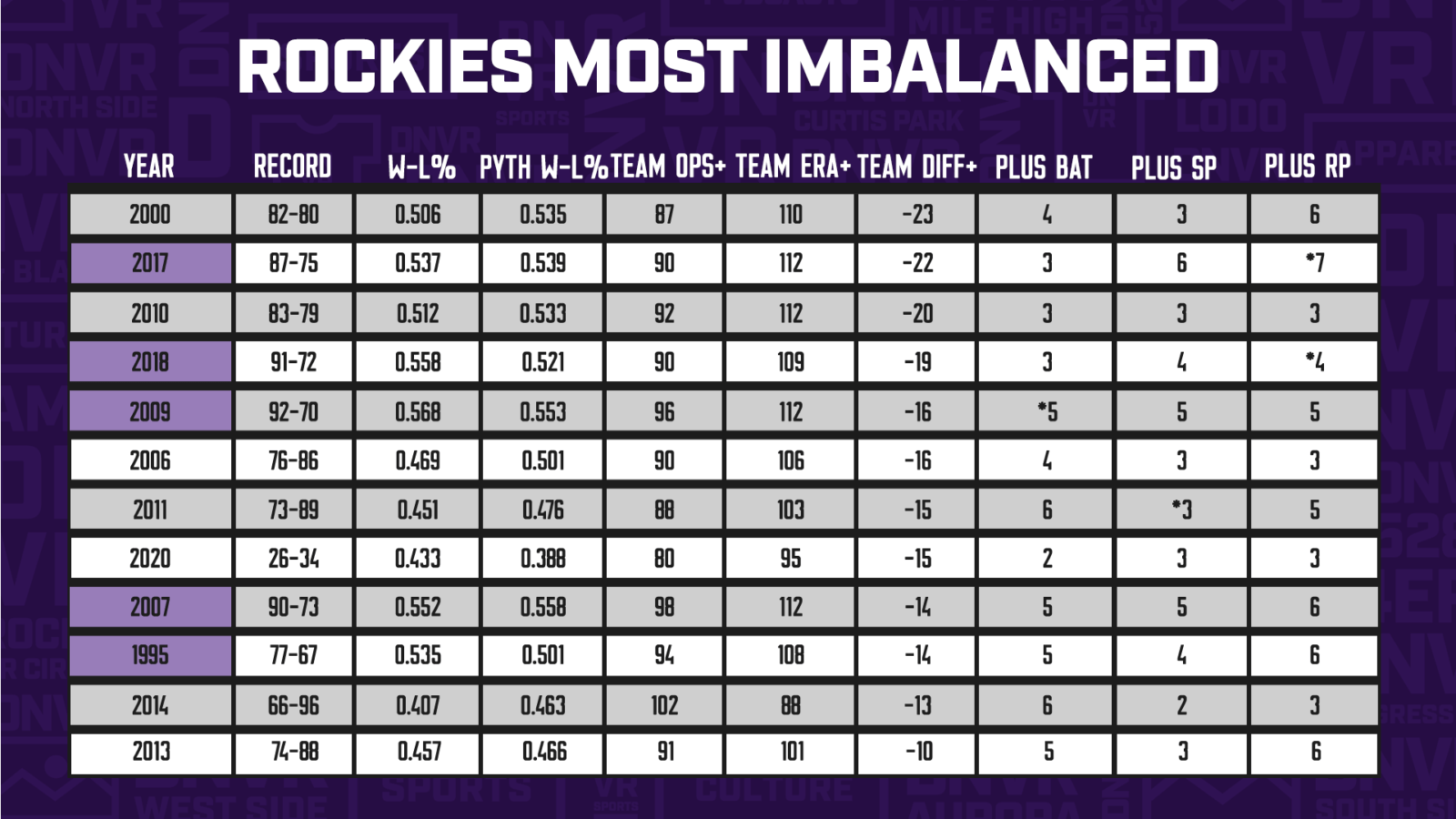 This is a good time to reintroduce the Coors Field bias going on here and admit that some of these teams were probably a bit more well balanced than these stats make them appear.

However, that also needs to be kept in mind every single time someone uses these exact same stats to tell you how bad the Rockies offense is or ignores them altogether when discussing Rockies pitching.

So let’s not get too over encumbered by whether or not these data points are telling us the true talent level of the players and look at them more as production quotients that need to be either avoided or achieved.

The lesson to learn here is not that Colorado needs to build a purposefully imbalanced baseball team, but rather that if we are going to use these numbers as a roadmap, we need to let them take us where they actually lead.

Based on precedent, if they want to play in the postseason, the Rockies pitching can drop no lower than a 108. Sorry league average pitching teams, that’s not good enough out here.

And the offense can drop no lower than 90.

Obviously, you want to do better than that but these are the baselines that must be met. This is how you build a foundation. 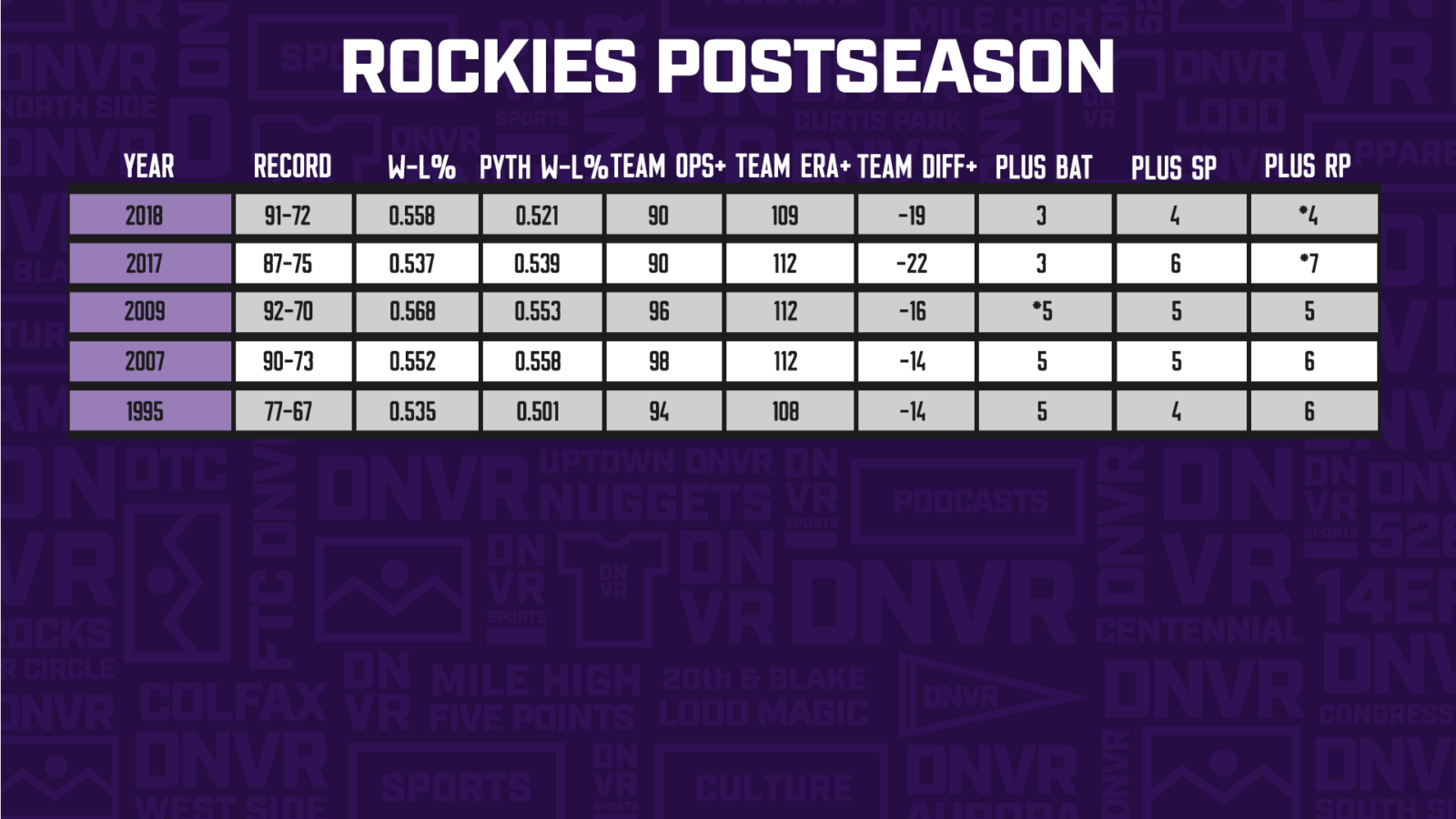 As you can see from the “Team Diff+” column, each of the years Colorado has made the postseason, their pitching has been significantly better than their hitting.

There are no corresponding numbers for the offense. No great offense has carried them to more than 83 wins and only a handful of times (maybe just once in 2000) can you truly claim that a poor offense was the primary reason for failure.

So, it is natural to look at a current lineup that has a steep drop-off after Nolan Arenado (when healthy) Trevor Story and Charlie Blackmon and reach the conclusion that solving this issue needs to be a top priority.

The above data also shows that while they can get by with three great hitters, a fourth dramatically increases their odds of success. But it isn’t a necessity.

The overall history of the Rockies shows us that while the lineup can and has been an issue, it is one that they can overcome. Not having enough quality pitching, however, is something that they have literally never been able to overcome.

It’s tempting to want to out-mash your opponents when you call Coors Field home. Fans, media, and even GMs get more excited about big bats than solid middle-relievers.

But as counterintuitive as it may seem to just about everybody involved, the Colorado Rockies have to pitch well before it can matter at all how well they hit.