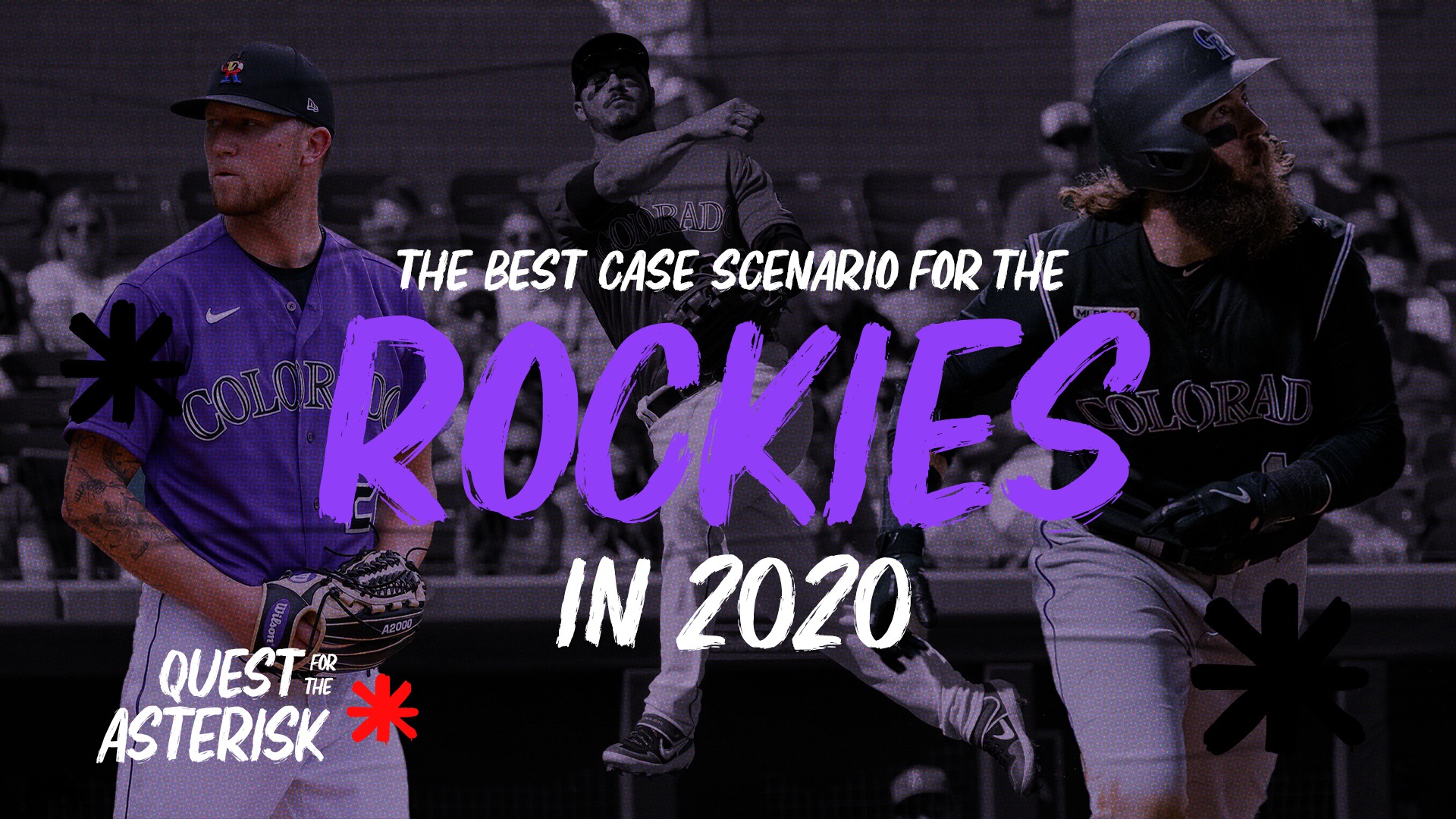 The Best Case Scenario for the 2020 Colorado Rockies

The best case scenario for the Colorado Rockies 2020 season is pretty simple. But it could also be remarkably fun for everyone involved so we are going to through it in detail.

I once had a middle school teacher explain priorities using an analogy about filling up a large space with various sizes of rocks. The most important things in life – family, love, fulfillment, work, basic resources – these are the large boulders that take up, but also leave, the most space. Next you have smaller rocks like comfort, steadiness, desire, and friendship.

As you move down the priority list you finally get to the grains of sand that fill everything in: fancy floral arrangements, walk-in closets, different shoes for every occasion, and, sadly, video games.

The point is, if you flood the space with the sand of life, it won’t leave room for the large boulders, the things that really matter.

A baseball team is built similarly both in terms of roster construction and on-field strategy.

In order to win the World Series, a ballclub must have a solid foundation of players and philosophies, they must be aided by well-fitting supplemental pieces, and all the little things around the edges must bring it all together.

If it does fall into place like that for Colorado this year, here is what it will look like.

The Rockies won’t surprise anyone if first and foremost they don’t get star production out of their star players. Nolan Arenado and Trevor Story may have to carry the largest load but of course a best case scenario includes Charlie Blackmon conquering COVID-19 and returning to form. Similarly, David Dahl will need a near repeat of his All-Star campaign from a year ago, if not more.

Same thing in the rotation. German Marquez, Jon Gray, and Kyle Freeland need to be among the best trios in the National League in order for this team to contend. Scott Oberg and at least one other reliever also need to be reliable.

Now, you might be saying, that sounds like a lot to ask for and aren’t you supposed to be selling us on the most positive potential outcomes for the year?

Yes, dear reader, and they are all right in front of you.

The only player in this section who is past his physical prime is Blackmon while every other one has shown two important qualities – proven success in MLB and plenty of room for more.

Dahl is the most obvious “you ain’t seen nothin’ yet” candidate if he can stay on the field.

Arenado and Story have both spoken to DNVR about their need (not desire) to cut down on strikeouts, especially on 3-2 pitches outside the zone. Both intend to improve batting average and on-base percentage, not relying quite so much on their stupendous slugging.

If they achieve this, and fight each other for MVP votes, Colorado is in the fight.

On the pitching side, Gray has been inconsistent but with flashes of brilliance. That is, until he was one of the most consistent pitchers in the NL last season, posting a 3.50 ERA at Coors Field where the typical ERA was above 5.40. Freeland, of course, came in fourth in Cy Young voting just two seasons ago. And Marquez has the best stuff among the three.

In a best case scenario, Gray (28) improves upon his career-best campaign from a year ago and finally puts all the strikeouts and spots of dominance from seasons before together with his steadiness from 2019. Marquez (25) puts up the Cy Young caliber season we all know he is capable of. And Freeland (27) recovers from his nightmare and proves to be the competitor we all think he is.

The key cog here will be Antonio Senzatela. For the Rockies to not just fight for a Wild Card but truly reach their potential to shock and surprise the world, Senzatela (25) will need to perform at a level that has only been seen in glimpses. He has shown up in 2020 with new breaking pitches to compliment his plus fastball, and a new body that shows his commitment to reaching the next level.

Ryan McMahon is the position player equivalent of Senzatela. If these two become a part of the core through performance, the Rockies have an incredibly solid foundation.

If we are counting Senzatela and McMahon as a part of that core, then the most important supplemental players are located mostly in the bullpen.

Assume Oberg is as lights out as he has been the last two years, once he returns. The Rockies really only need one other reliever to dominate and while the most likely answer after last season feels like either Jairo Diaz or Carlos Estevez, the best case scenario actually sees Wade Davis regain his form from 2018 and before.

Of course, Diaz and Estevez still need to bring the heat. And they are probably going to. If Davis (34) can become a force again, this is a legitimately scary back-end of the bullpen.

Colorado can afford to see what veteran Daniel Bard has left but for only so long. A new waive of impact relievers is ready to sweep into Coors Field. James Pazos, Tyler Kinley, Yency Almonte, Phillip Diehl, and potentially starters like Jeff Hoffman and Chi Chi Gonzalez are set to step into these open roles.

We don’t know who from this group will rise but our best case scenario will take three of them to finish out a quality bullpen. The highest ceiling guys are lefty Pazos and righty Kinley.

Colorado will also need a few key contributors off the bench.

Whether Blackmon is at full strength or not, the Rockies will need Sam Hilliard to play a much larger role in this truncated season than they were likely expecting otherwise. The addition of the DH makes it that much easier to get him into the lineup.

In the future we are dreaming upon, Hilliard’s talent proves out in MLB on this bizarre stage. He showcases his power/speed combo, finishing Top 5 on the team in home runs and stolen bases. People start talking about him as the next big thing.

He is joined in the youth movement by Garrett Hampson and Brendan Rodgers as all three prove that they belong in the Bigs.

If these players are truly over their early-career rollercoaster ride and settling in, the Rockies have the supplemental pieces to compete.

All The Little Things

Hoffman focusing his raw talent into some smart pitching would go a long way toward mitigating shorter starts and taking pressure of the backend in blowouts.

Gonzalez realizing his pedigree and extending his finish to last season would give Colorado depth at starter.

Chris Owings proving to be a remarkable defender at seven positions and a decent speed option off the bench whose bat isn’t quite as terrible as it appears could be a difference maker with a deeper bench and a shorter season.

Elias Diaz and Dom Nunez providing value off the bench would shore up one of the bigger holes from a season ago.

So how does it look?

Murphy and McMahon join Arenado, Story, Blackmon, and Dahl as legit sluggers feared by opposing pitchers. Marquez, Gray, and Freeland come out strong and Senzatela joins that party. This leads to a fast start out of the gate as the Rockies can sprint into the season with far easier competition in the first half.

The ‘pen, buoyed by the emergence of Pazos and Kinley, the maturation of Estevez and Diaz, the recovery of Davis, and the steadiness of Oberg, slams the door shut with regularity.

They build a great early record, motivated by a cast of extremely talented players, all of whom still feel like they have a great deal to prove. As the stresses of the season grow, so does Colorado’s confidence in themselves.

Then, they are in a position to make a trade at the deadline to add that one piece that will put them over the top, and maybe even potentially signal to their star third baseman how serious they are about competing when the play on the field warrants making such moves.

Make no mistake, in a season this wide open, the best case scenario for a team as talented as the Rockies is to win their division and the World Series.

It may not be the most likely scenario, but it is absolutely on the table.

They’ve got maybe the most motivated superstar in the game, a cast of young super-talents who have yet to reach their ceiling backing him up, and a few veterans who’ve put up sterling careers but never tasted ultimate success.

And almost nobody believes in them.

Count out the Colorado Rockies at your own peril.