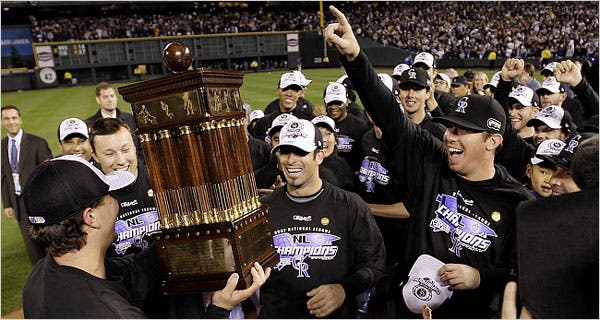 With three Opening Day celebrations on this date, only one did not result in a win. Although Colorado would lose 8-6 to the Diamondbacks in the first game of 2007, the year would be the most successful in franchise history.

Even after the 8-6 loss at the hands of Arizona to begin the season, Colorado would enter play on May 22 with a 18-27 record before having the best record in the National League thereafter (72-46) including a run of 21 wins in 22 games that included Game 163 against the San Diego Padres.

Chris Iannetta made the first of six Opening Day starts as catcher, most in franchise history. At 23 years and 359 days to begin the 2007 season, he is still the youngest Opening Day catcher in Rockies history. Ironically, he would not play a single postseason game for Colorado even though Iannetta was listed on the roster of all three rounds of the 2007 playoffs.

Kaz Matsui, the first and only Japanese position player in Colorado’s history, got the nod at second base. Since his departure following the 2007 campaign, no Japanese player has suited up for the purple.

Helton notched two more Opening Day hits, but it would be Matt Holliday – 0-for-5 in the game – who’d end the season with the most multi-hit games for Colorado (59) for the second-straight year, snapping the Toddfather’s streak of six consecutive seasons.

After signing a one-year, $1M contract with the Colorado at age 42, Steve Finley drew a walk as a pinch-hitter against his former club in the final season of his 19-year career.

Going into the 2001 season, Colorado spent big on the free agent market. Signing LHP Mike Hampton to the highest total contract for a pitcher in history to that point to an eight-year, $121M deal, not to mention LHP Denny Neagle on a lucrative five-year, $51M pact.

Though Hampton had a lifetime 6.88 ERA at Coors Field to that point in his career, he provided Rockies fans with an incredible treat on Opening Day 2001, tossing only the third shutout in Coors Field history and first to start a season.

In 1996, after more than eight-and-a-half seasons in the minor leagues, Trenidad Hubbard made his first Opening Day roster at the age of 31 and quickly rewarded his employer with an eight-inning pinch-hit double that scored two runs that sealed the 5-3 win over the Philadelphia Phillies at Veterans Stadium.

Walker added two hits in the win, including a two-run home run in his first at bat of the season.

It wasn’t until December 2018, 16 years after suiting up for the club and eight years after retiring, that Colorado made their final payment to Hampton.

On This Day in Baseball History

In 1908, after a two-year investigation, a commission formed by former professional ballplayer and current sporting goods magnate Albert Goodwill Spalding declared that baseball was invented in 1839 by Abner Doubleday in Cooperstown, New York. The Mills Commission, headed by the former N.L. president A. G. Mills, ignored evidence to the contrary in order to designate James Fenimore Cooper’s town as the most likely site for a Hall of Fame and museum. Eventually, some 30 years later and 100 years after Doubleday was alleged to have created the game, the National Baseball Hall of Fame opened in 1939.

DNVR Rockies Podcast: Can Rockies go 4-5 against Giants & Dodgers in Hunt For 69 wins?