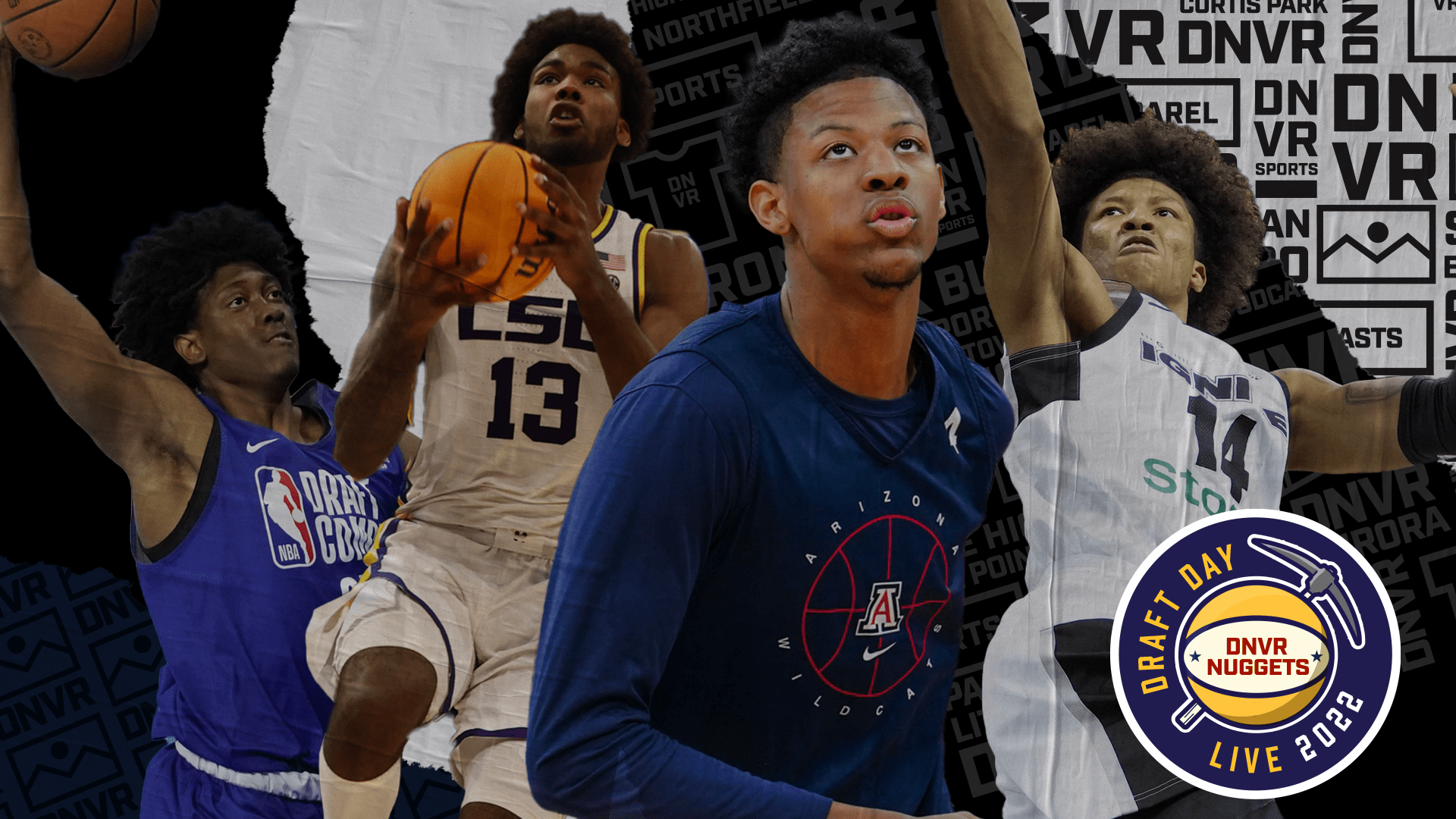 Nuggets Big Board 1.0: The best, realistic fits for Denver in the 1st round

The Nuggets currently hold the 21st and 30th overall picks in the first round in Thursday’s draft. Based on the players who are projected to be available in Denver’s draft range, here are my 10-best prospects potentially available for the Nuggets to choose from.

Three players projected to go in the mid-late lottery — Dyson, Daniels, Jeremy Sochan and Ochai Agbaji — would be great fits for Denver too and high on this list, but I didn’t include them in this list. In terms of potential trade-up targets, Sochan and Daniels would be No. 1 and 2 on that list.

There’s buzz Williams will go in the teens, but if he lasts until 21, I don’t think Denver could get a better basketball player at that spot in the draft. Williams tested as one of the more athletic players at the NBA Combine — 32.5-inch vert, 39-inch max vert — even though his athleticism doesn’t pop as much with how he plays. At 6-6 with a 7-2 wingspan, Williams has jaw-dropping measurable. Oh, and he has a feel for the game and basketball IQ that ranks near the top of this draft class. He looks like a Jokic Ball player and a damn good one. Williams can shoot, defend and is one of the craftier players in this draft. His basketball IQ jumps out to you every time you turn his film on. Williams would be a great get for Denver in the first round.

Eason’s long, rangy and athletic. He’s exactly the type of disruptive on and off-ball defender that Denver should be looking to add as it looks to get more defensively versatile around Nikola Jokic. Eason is a 4/5, so you wonder what his presence would mean for Zeke Nnaji’s future, but he could be a no-brainer pick for the Nuggets if he falls to 21. Adding Eason would be a solid first step this summer in Denver changing its dynamic and ceiling on the defensive end of the floor.

He’s 6-6 1/2 with a 7-1 wingspan. He plays the three. He projects to be a two-way player with the potential to be a very good wing defender. Beauchamp looks the part and he played against low-level NBA competition in the G League last season. I give him a slight bump for that. One big knock on Beauchamp is he’s going to be 22 by the time next season starts. Dalen Terry on the other hand is a full two years younger. But Beauchamp will enter the league with NBA skills. He moves well. He’s smooth. The Nuggets will get a great look at Beauchamp on Monday when he’s in Denver for a pre-draft workout.

I’m really warming to Terry. His defensive and offensive versatility and all-around unique game remind me of a young Andre Iguodala. Terry could slide between all three perimeter spots in the Nuggets’ lineup. He can even play some point guard. Terry is a Swiss Army Knife player who will be able to play in almost every lineup and slide at least between positions 1-3. There are scouts who think he should have gone back to school for another year, but those same scouts also rave about his spirit and motor. I think there’s a really valuable player here.

Twenty players in college basketball last season qualified for the 50-40-80 club (at least a 50 FG%, 40 3P% and 80 FT%) with more than 1,000 minutes player. Moore, along with Jalen Williams, were two of them. Moore is an efficient offensive player who knows his skill-set as a glue guy. He’s a sturdy defender too. Both of those qualities should be attractive to Denver. This would be a low-ceiling, high-floor play for the Nuggets. That’s not a bad route to take at 21 overall for a team trying to win a championship next season

Braun checks a lot of the same boxes Braun does. He’s a little taller, but his 6-6 1/2 wingspan leaves a lot to be desired when you put it up against Moore’s (7-foot 1/2). Like Moore, Braun has a ton of experience. He started 74 games for Kansas over the last three years, led Kansas in total minutes this season, and logged a game-high 40 minutes in the NCAA Championship vs. North Carolina in April. He’s a hard-nosed defender and has deep range on his 3. Braun’s a high-floor plug-and-play option that some really good team is going to scoop up.

I’m just blown away by Brown’s athleticism at 6-8 with 41-inch vertical. The forward runs like a deer, gets out on the break like a 100-meter sprinter, and atches lobs at the rim like a wide receiver. His defense looks promising too. That being said, Brown is a project. He’s 19 and will need seasoning in the G League. If he hits, Brown can be a John Collins/Shawn Marion hybrid who’s one of the best lob finishers in the league, lives above the rim, defends 1-4 and is one of the more terrorizing transition players in the league.

Point guard isn’t the position the Nuggets should target in the first round, but Wesley and TyTy Washington are two really good basketball players likely to be available in Denver’s draft range. Wesley projects as a combo guard who can do a little bit of everything and can flex between both backcourt positions — that’s important in the Nuggets’ offense alongside Jamal Murray. He also gives you a Bones Hyland-like feel with his pace and floor game. This goes for the Washington pick as well, but the only way I can see Denver drafting a smaller guard at 21 is if the Nuggets trade Monte Morris on or before draft night.

When you watch Washington get to his bread-and-butter, his mid-range pull-up jumper, you see a move that he’s going to be able to repeat at the NBA level time and time again. Washington looks like Chris Paul when he’s coming off a screen, gaining space and naviagteing to the elboew. He projects to be a good defender and all-around combo guard. It feels like the Nuggets could do a lot worse with this pick. Also, whenever in doubt, draft a Kentucky guard. That draft strategy usually works.

Liddell is a better player than half the guys on this list, but I can’t get there on him at 21. He can fill it up on the offensive end of the floor, gives off early-career Paul Millsap vibes and was a man amongst boys in the Big 10 last season. But at 6-7 with a scorer’s mentality, Liddell is a natural power forward who could struggle to find a role in the NBA that maximizes his skill-set. He’d be behind Aaron Gordon, Michael Porter Jr. and Zeke Nnaji at that position in Denver.