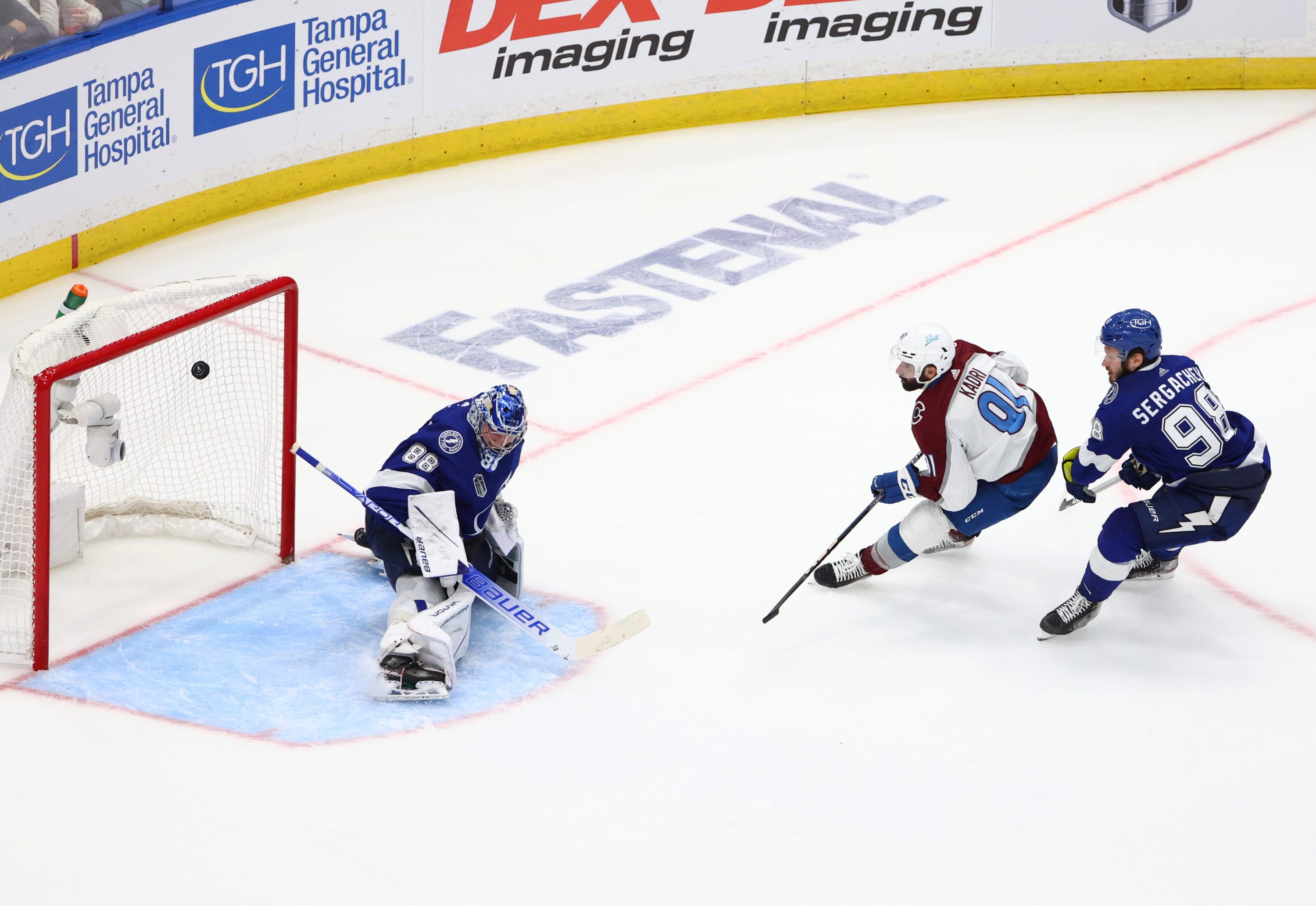 One of the many reasons the Stanley Cup Playoffs are the hardest postseason in major professional sports is the war of attrition. Hockey is such a physical, demanding sport that when every team gets eliminated, we get the true toll the journey took on that club.

For a guy like Nazem Kadri, however, the journey is a lot more complicated.

I wrote extensively already about Kadri’s exceptional night in St. Louis when he overcame oodles of off-ice awfulness to silence a city and shut down their title hopes. Thankfully, this time the conversation is just about Kadri, hockey player.

That hockey player has a difficult history. We all know about his penchant for postseason suspensions and the lingering question of “what if?” his absence regularly brought his teams.

Last year, the Avalanche missed Kadri for the entire series against the Vegas Golden Knights and watched his VGK counterpart, William Karlsson, chew up Colorado’s other center options and as Nathan MacKinnon’s brilliance was stymied. We’ll never know what would have happened had Kadri been part of that series, but that’s part of his history.

We’ll never know who Nazem Kadri could have been in Toronto had he stayed on the ice. Would they have gotten out of the first round with him part of the action? Would the Maple Leafs have given up on him the way they did after Kadri was given a “rest of the series” suspension for his cross-checking on Jake DeBrusk? What kind of legend would Kadri have been to avoid all that nonsense and be the guy to actually get Toronto out of their embarrassing history of postseason flops?

In theory, Kadri and the postseason should be made for each other. Kadri is a guy who thrives on the edge, with his physicality and his emotion. The playoffs are driven by emotional edges, teams who can conjure up the right kind of hate for their opponent and put them away. That killer instinct should be a natural part of Kadri’s arsenal.

Then, this year came along. A contract year, sure, but a year where Kadri better controlled himself during games. This is a guy whose career-high in points coming into this year was 61, a perfectly respectable number for a second-line center, which Kadri is in Colorado with MacKinnon at the helm. 87 points later (take away all 28 goals he scored and his 59 assists would still be his second-best season ever), Kadri made his first All-Star Game and helped drive the Avalanche to their best regular season ever.

Before this year, Kadri had only been part of one multi-round postseason experience. It was Colorado’s injury-riddled bubble hockey experience back in the fall of 2020. Kadri was heavily involved in the outcome of that Game 7 against Dallas as his fumble at the blueline led to the Stars’ game-tying goal just seconds after the Avs had taken the lead, then Kadri lost track of Joel Kiviranta in overtime and the unknown Stars forward cashed in on the unlikeliest hat trick to end Colorado’s season.

When the playoffs came around, it was an active question: How would teams test Kadri? The Nashville Predators sent a cadre of nobodies after him during their multiple blowout losses and Kadri just shrugged them off. He wasn’t taking the bait from an uncompetitive team that didn’t belong on the same ice as the Avalanche.

The Blues series was his greatest test, and he passed with flying colors. The Edmonton Oilers provided a whole different problem and Evander Kane, who went out of his way to headhunt multiple Avalanche players late in Games 1 and 2 of the series, finally got his pound of flesh when he smoked Kadri from behind.

Kane was given a five-minute major and ultimately suspended from Edmonton’s season-ending Game 4 loss, but he got to play the rest of Game 3. Kadri didn’t after he broke his thumb, which required surgery.

Most of us thought our final image of Kadri would be holding his arm going down the tunnel in Edmonton to a crowd of people who thought he had somehow sold that call with a dive. It felt like a crushing end to one of the great redemption stories.

I want to talk a little about that idea for a minute. Redemption, I mean.

I’ve seen a lot of people lamenting Kadri’s success this postseason, that a guy with his past shouldn’t be celebrated for his current success. It’s left me a little confused. Is a player never allowed to reform, never allowed to prove he is better today than he was yesterday? Isn’t the point of suspending players to punish them for dangerous hits that the league doesn’t want in the game? Has Kadri not paid his price, done his proverbial time? At what point are we allowed to let a man learn, grow, get better, and appreciate that portion of his journey?

For Kadri, that moment appears to be now.

Not only did Kadri defy the odds by getting surgery on his thumb and returning this postseason, but this was also a guy who was barely holding a stick two days ago, let alone shooting on NHL goalies.

He comes back in Game 4 and has an immediate impact, especially with the Lightning suffering their own injury issues in the series. At 5v5 tonight, the Avs had a 25-13 shot attempt advantage and a 16-6 scoring chance advantage with a 4-0 high-danger chance advantage to boot.

He wasn’t being hidden, either, as Tampa Bay head coach Jon Cooper actively chose to attack Kadri with his top forward line all night. Kadri dominated the process and then provided the night’s exclamation point.

In overtime, Kadri came flying off the bench and took a quick head pass from Artturi Lehkonen. He entered Tampa Bay’s zone with speed, then dips under defenseman Mikhail Sergachev, who got too tight on his gap, and Kadri opened him up like a flower in full bloom before beating Andrei Vasilevsky just under his blocker.

Nobody other than Bowen Byram seemed to know the puck went in, but sure enough, it did. It was Kadri’s second game-winning goal (guess which game his other came in?) of the playoffs, but this one, well, this one was something else.

Instead of leaning into his tortured past and letting his demons conquer him, Nazem Kadri has shown us his greatest self. Playing with heart, playing through teams trying to goad him into nonsense, and now in the Stanley Cup Final, playing through the pain after being on the receiving end of the kind of cheapshot he has too frequently delivered.

All of it has brought Kadri to this moment of redemption, one he can’t have without controversy, of course, but that’s Tampa Bay’s problem. We can all strive to be a better version of ourselves; we should all strive for the kind of path Kadri is on right now. He found a group that believed in him, and he rewarded that group with his best.

That best has put them all on the precipice of history as they try to become immortalized in the annals of hockey history. The journey won’t be the destination for these guys; that destination will instead be getting their names engraved on Lord Stanley’s Cup.

If Colorado completes the task at hand, the next question becomes:

Can Kadri lift the Stanley Cup with a broken thumb? I wouldn’t count him out.