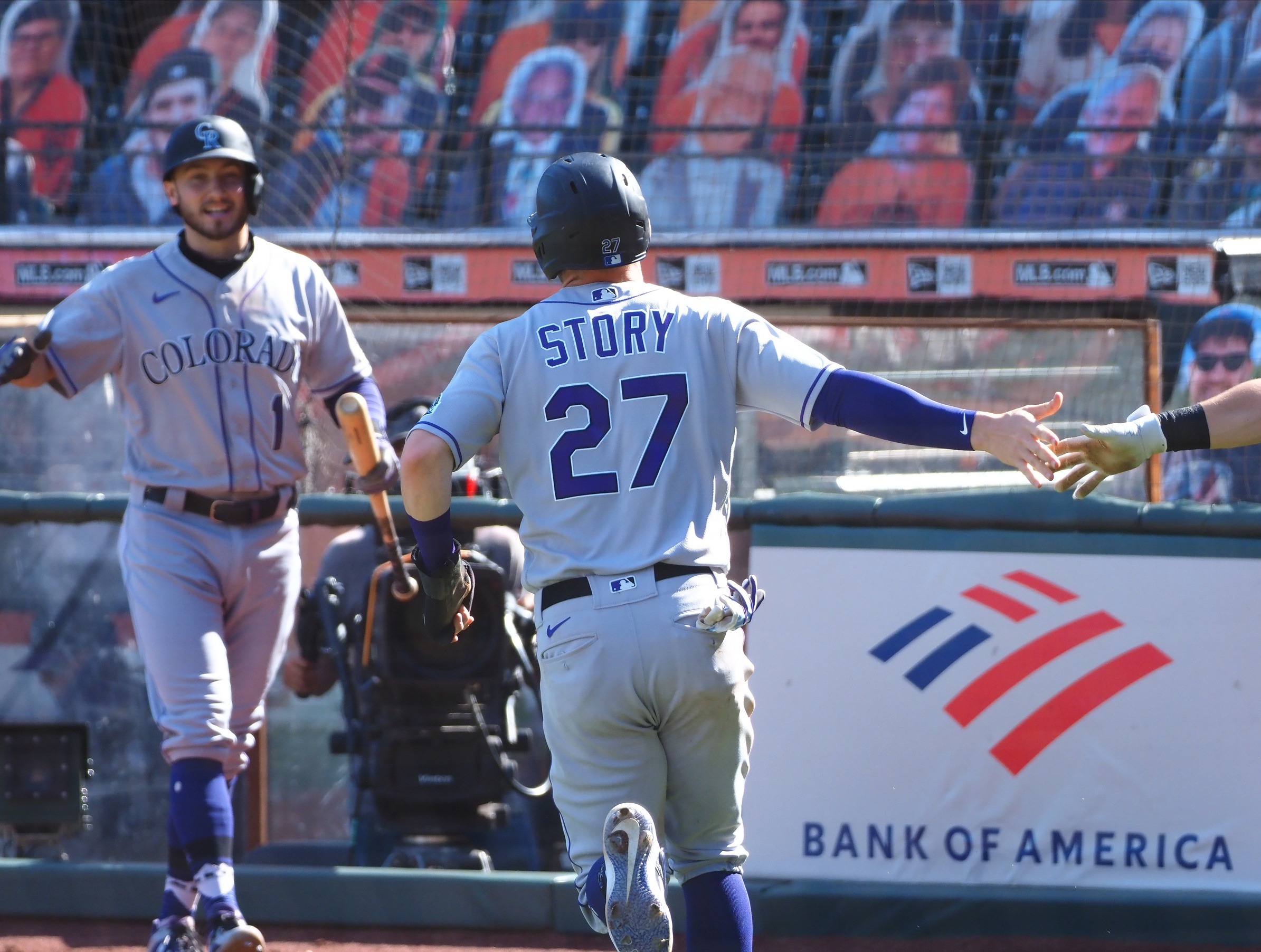 I would ask how you are doing but we all know the answer to that question.

Some fans may have finally found their way into some sort of optimism in this current mess but it would be more than a stretch to say anyone is happy about where this team stands.

Many have already declared their fandom dead. Others have simply put it on hold.

The debate rages about whether to boycott the team, what that would even truly look like, and how impactful it would be.

At the center of that debate stands a difficult question that everyone has to answer for themselves; How do I root for the Rockies… without rooting for the Rockies?

In other words, how do I support the people associated with the team and the community around that team without making it seem like I support how this team is run?

Cutting them out cold turkey may seem like the most obvious and cathartic answer. But then you realize its two people against hundreds.

Who do you not want to support? Dick Monfort and Jeff Bridich.

Who do you want to support?

First of all, the players. That might mean anything from just a handful of guys you’ve been cheering on for years or it might even mean the entire 100+ player organization, none of whom asked for this current situation and all of whom are going to work hard to be the best that they can be.

Then, there’s the folks who work at or around Coors Field. Surely, nobody has their anger sights set on them. If everyone stops going to games, what happens to the people around the games who depend on them?

Don’t forget the social media team, people in communications or any number of other employees who also are hurting as much as any fan if not more right now. They didn’t ask for any of this.

And maybe, just maybe, you might even feel inclined to support your local media outlets. But doesn’t that stand in direct contrast to your all-time low interest in consuming content related to this team?

As you are probably aware, boycotts aren’t really effective in pro sports.

Nobody is going to tell you that you have to go, listen to, or watch baseball games but the fact remains that if these are things you love and you are avoiding them simply because you don’t want to support Monfort and Bridich, you’re only hurting yourself.

In the end, unless there is a massive cancellation of season tickets and the ballpark remained empty for a couple years (more unlikely than them winning the World Series) there isn’t a big enough financial impact available to the average fan who wants to send a message.

Even if thousands of fans could agree to do it, skipping out a few games a year remains a drop in a giant bucket swallowed up by the revenue generated from television and transplant fans.

So, you can keep watching TV, listening to the radio, and catching up on your favorite podcast after each game. None of that puts more money in their pockets. Nor is it a tacit endorsement of their behavior.

Also, keep buying/wearing Rockies gear, especially if it isn’t official. Just like going to local bars to watch the game, it doesn’t make the problem worse.

Empty gestures of anger don’t do any good.

Don’t let anyone convince you that you are doing something wrong or are a “part of the problem” if you keep investing your time, if not your money, in this team.

It’s not like boycotting any other business because there are only 30 MLB teams and they have so many built-in safeguards against losing the business of one, or hundreds, or even thousands of customers.

You can support all the people adjacent to the Rockies, and yourself, without necessarily supporting the team itself.

But that doesn’t mean you just give up and take no actions to let those in charge know how you feel.

You can stop buying official merchandise.

You can send emails to Dick.Monfort@Rockies.com.

Season ticket holders can cancel. You can spend less but tip well while at the park.

You can even cheer for another team. Wear a Cardinals Arenado jersey to the park or shirts and signs with clear messages to ownership. They’ll see that long before they see the slight difference in the number of empty seats.

A couple of readers suggested to us a once-monthly boycott. Since the point is to send a message rather than make a real-word financial impact (because again, that’s nearly impossible) it was suggested that Rox fans take a total blackout from the team on the 28th of each month.

This is a great idea.

It gives fans a day off, sends a clear message, but only punishes you by making you miss out on one baseball game a month. Of course, the 28th just happens to be the number of a former third baseman now playing in St. Louis.

And on the rest of the days, in whatever way you choose, you can cheer on the boys who still deserve your fandom, even if the people upstairs do not.

Not to rub it in or anything, but here is the lineup that should be suiting up for the Colorado Rockies in 2021:

You may have heard though, that three of the top five players in this group now play for somebody else.

For primarily or entirely financial reasons, the Rockies have moved on from LeMahieu, Dahl, and now Arenado and their nine collective All-Star Game appearances.

There was an ongoing debate about whether that offense was actually good enough to compete but there is no question that they are in a much worse spot than they both were and could have been.

Instead, the Rockies, pending any further transactions, are likely to roll into Opening Day 2021 with a lineup that looks something like this:

The bad news? Beyond Story and Blackmon, there are zero proven Major League bats in that group.

The good news? Each one of those guys is young, has never gotten an opportunity for a full season of starts, and is playing with plenty to prove.

Don’t get it twisted, an avalanche of goodness would have to come Colorado’s way in order for this collection of hitters to produce enough to even get the club to a .500 record… but that doesn’t mean this will be an insufferable team to watch.

With the exceptions of Desmond and Owings providing a bit of leadership and depth off the bench, and the aforementioned duo of stars, every single position player on this roster is in the “let’s find out” stage of their career.

Tapia and McMahon were the first to break through with regular starts but still don’t have enough of those on their resume to draw any conclusions just yet. Those two along with Hampson, Fuentes, Hilliard, and likely Nunez are all set to far surpass their career highs in innings played.

The Lost Boys, as we’ve taken to calling them here, are not expected to do big things but they are more unknown at this point than they are conclusively bad.

At the very least, we should know much more about each of them by the end of the 2021 campaign. We will know who can be a pivotal part of the future, who will settle in as a role player, and who just can’t hack it.

Right now, the Rockies have somewhere in the neighborhood of 15 players who could end up in any of those three categories and while everyone has their own strong theories, we just don’t know until they go out and play the baseball games.

A roster that is expected to finish in the bottom third of the league is a tough thing to get excited over, but if it was filled with overpaid veterans, or really just veterans in general, it would be far worse.

There is nothing quite like the unknown potential of youth.

Colorado Rockies fans may never forgive Dick Monfort and Jeff Bridich for the fact they could have a roster packed with fan-favorite All-Stars and instead have one packed with relative unknowns that almost nobody is excited about at this exact moment.

But don’t hold that against the unknowns.

They can never fill the Nolan Arenado, or DJ LeMahieu, or David Dahl-shaped hole in your heart. And it’s not fair to ask them to.

What they can be is something easy to root for.

They’re the underdogs both as a group and as individuals.

McMahon and Fuentes will walk in Arenado’s shadow for a while. Rodgers will walk in LeMahieu’s and maybe Story’s. Tapia and Hilliard in Dahl’s.

This season, and probably the next, will be a challenge for each of them individually and all of them collectively to step out of those shadows and prove to the world, and to themselves, that they are worth your cheers.

Even if the ownership isn’t.