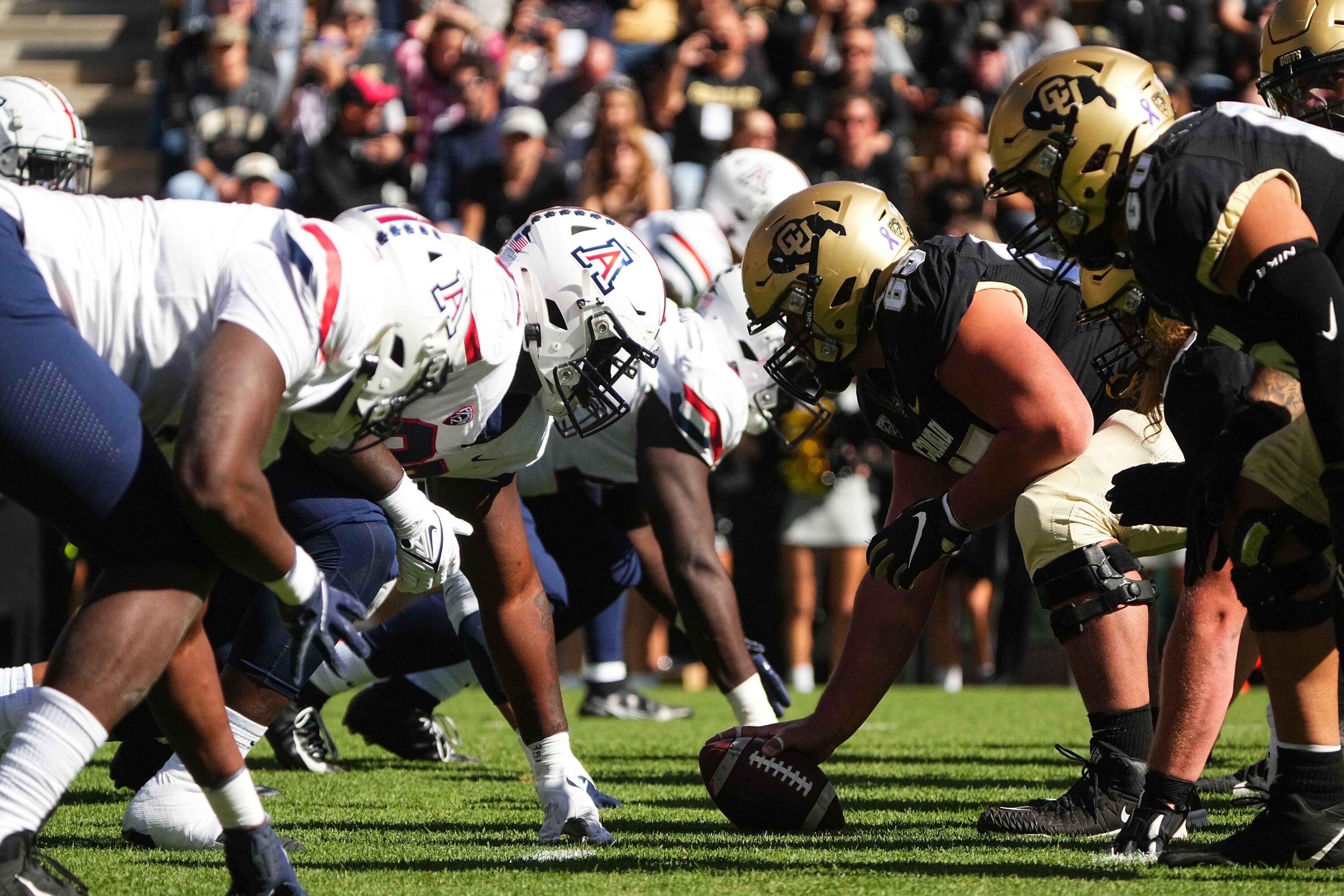 It was about as chaotic and tumultuous an off-season could possibly be for the Buffs. Despite a litany of transfers out and a re-shuffling amongst the coaching staff, there is an upbeat, humble yet confident vibe about the Buffs’ chances to improve and build on last year’s season.

Offensive line woes were an underlying theme in 2021 and were one of the reasons why CU’s offense struggled in all facets. It also helps that a player of Casey Roddick’s caliber is completely healthy and ready to contribute to new offensive coordinator, Mike Sanford’s “multiple” offense.

“It’s obviously a new offense I’ve never been a part of an offense like this so it’s going to be something that’s new. I think that essentially, it fits our players well. It fits the QB well, fits the RBs well, fits the WRs well, so I think it’s more of what you would run in the NFL and preparing [us] for the next level as well. So I think that it’s allowing us to get our football knowledge to the next level.”

Roddick missed most of the off-season program in 2021 due to complications brought on by COVID-19. Now with a full off-season’s worth of preparation and a new crop of coaches to learn from, Roddick explained why new offensive line coach, Kyle DeVan is a breath of fresh air for the CU offensive line.

“I mean at the end of the day you have to protect. Last year we did not do a great job of that and this year with Coach DeVan that’s been a point of emphasis for us.”

Roddick continued about Coach DeVan and how he has been able to not only improve his game physically but mentally this off-season.

“I think that what I’ve learned more importantly is technique. Also, the scheme of the game, why we run certain plays, certain formations, what type of formations were going to run, is it going to be unbalanced, is it going to be a trips formation, so I think that learning more about the game of football has definitely gone leaps and bounds. Obviously, he’s a teacher first and then he’s a coach second, so that teaching aspect has really helped me simplify the game. Essentially I’m playing slower but my game is faster so I think that was the biggest thing from Coach DeVan.”

While only 37, Coach DeVan brings an impressive amount of experience to Boulder having worked for the USC Trojans, New Orleans Saints and Michigan Wolverines.

Projected starting center, Noah Fenske gave some great insight when asked about Coach DeVan and how he’s improved the offensive line this camp.

“He’s just raised the standard. He’s not going to settle for anything less. He came from [a] Joe Moore Award [winning program] and from the very first day he’s like, I want to go win that. I don’t want to win that next year, I want to win it this year, right now. He’s not looking to be good in three years, he’s looking to be good right now. And I think what makes him so special is his ability to coach different personalities… I think that’s a really good quality to have and not a lot of coaches have that and there’s not a guy in our O-line room that hasn’t gotten significantly better this camp… He’s been a blessing for me, I’ve become so much better of a football player.”

Fenske continued on about how this year’s team is deeper and more prepared than in previous seasons.

“There are ten guys who can start on this offensive line and be legitimate Power 5 offensive linemen, last year we had maybe two, or three, and that’s not a knock on anybody but we weren’t quite ready. I’m not trying to diss on the coach but we just have a better one now.”

“Probably depth, which I guess kind of goes with experience. It’s cool seeing, I mean last year our D-line, I felt bad for them you’d see those guys out there every dang play. I felt even worse being the offense that was three and out, three and out, three and out and seeing the D-line going on and off every time and they didn’t get any breaks and now they finally have guys coming along. I know one player that’s coming along really well is [freshman defensive linemen] Aaron Austin, he’s flying around on tape so he’s getting me excited. But depth for sure is probably the biggest factor that’s different.”

“It’s awesome, they’re awesome. I’d say I’ll probably be good friends with them after we’re done here. They’re just good guys, I get along with them really well. I think the way they build relationships with us allows them to be hard on us too. Which I think is crucial. In times in the past, there have been coaches that, it’s always negative there’s not a whole lot, I don’t want to say friendships with the players, but more of a father-son relationship now as they’re uplifting you all the time but because of that they’re able to be hard on us and whip us into shape which is really good.”

Most fans have the Buffs’ offense in their sights as the unit they want to see most improved. According to Russell and Fenske, Buffs fans should be looking forward to seeing their offense taking the field this year.

“I think the whole idea is that we’re good at everything. We’re going to be multiple with different sets. It’s hard to say, but I think we’re going to be good at throwing and running the ball,” said Russell.

“Our offense is humming right now, I wish people could see what we’re doing in practice all the time because I don’t think they’d be saying we’re going to go 0-12. There’s different coordinators and a smashmouth attitude, it’s fun. They make practice fun because they’re just as competitive as we are. And I think that maybe that’s something we lacked last year was the competitive edge that our coaches brought to practice,” said Fenske.

As time marches on towards the opening game of the season against TCU, the general attitude around this year’s Buffs team is that they are going to be greatly improved on offense.

While talk is cheap and seeing is believing, after last year’s dismal offensive performance, the skepticism may be warranted. But the matter of fact is that the Buffs have a much more experienced coaching staff on the offensive side of the ball than they did last year which is breeding confidence into their players.