The Colorado Avalanche brought an old friend back to the fold as they completed a trade with the San Jose Sharks. Matt Nieto and defenseman Ryan Merkley are now members of the Avalanche organization while Jacob MacDonald and Martin Kaut head to San Jose to continue their careers.

On the surface, this deal can be broken into two pieces: Nieto for MacDonald, Merkley for Kaut. It’s a trade of two low-level NHL players and two stalled prospects who were first-round selections in the 2018 NHL Draft.

This trade won’t drastically change the fortunes of either team (probably), but it does have an impact on the Avs in the immediate and, hopefully, the long term as well. Let’s break this down.

If you’ve been an Avalanche fan for at least a few years, you are already familiar with Nieto after he spent parts of four seasons in an Avalanche sweater. Nieto was part of the identity the Avalanche would eventually build on their depth lines as they worked to bring in fast skaters and aggressive forecheckers.

On that front, Nieto remains a quality fit in Colorado, though as a 30-year-old now he may not be quite as fleet-footed as he was when he left after the 19-20 season.

That is to say, Nieto’s shooting percentage of 11.4 is one of the highest of his career, and combine that with the ice time he is unlikely to recreate in Colorado and it would be unfair to expect Nieto to continue producing at the same level he has to start this year.

In Colorado, his role will be very similar to the one he had when he left. While no longer on the flank next to Pierre-Edouard Bellemare and Matt Calvert, Nieto should immediately slot in next to Ben Meyers on Colorado’s makeshift fourth line.

If the Avs ever get healthy at forward, Nieto will fit somewhere next to Logan O’Connor and Andrew Cogliano. As none of those three are centers, it seems unlikely to me that those three would comprise an entire line together, but you never really know. Darren Helm wasn’t much of a center until the Avs said he was during the playoffs last year and he played some of the best hockey of his entire career so I’m not definitively ruling anything out.

Speaking of Helm, that the Avalanche felt the need to make this move when they did strongly suggests a pessimistic outlook on Helm’s ability to return to action this season. You never know with injuries, but given the original outlook when he was first injured was bleak to begin with, Colorado getting a guy to play the exact role Helm would have filled is telling.

Anyway, let’s look at Nieto’s fancystats and get a sense of where he is in his career. 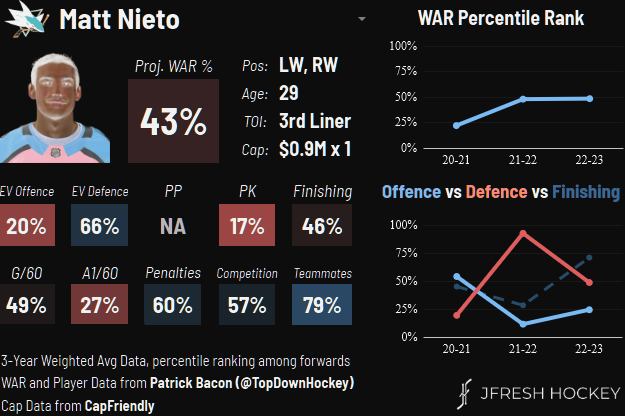 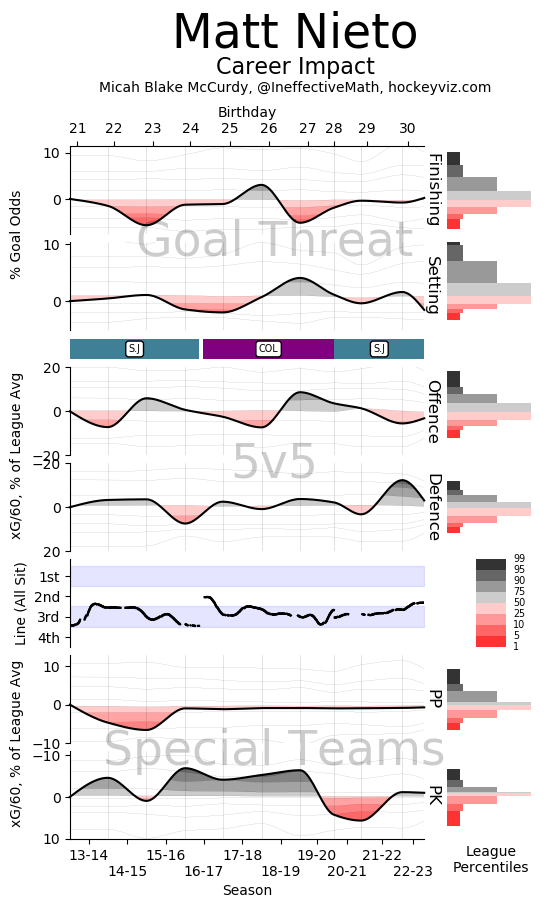 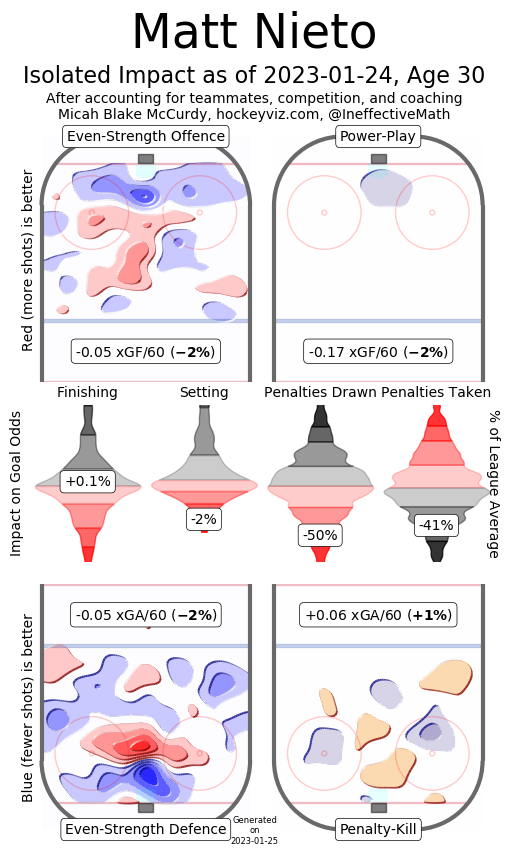 It’s all pretty encouraging. No, he’s not a dynamic offensive player, but he never has been at the NHL level. Defensively, he remains slightly above average despite playing against tougher competition than he’ll get in his role in Colorado.

The defensive results certainly suggest he should be just fine at the bottom of the Avs’ forward corps and might be able to help with the penalty kill, too.

From the business side of this, Nieto makes just $850K and is an unrestricted free agent at the end of the year.

Hooo, boy. This is where the trade really gets interesting.

Merkley’s career has been marked by being a player who possesses great talent but a questionable head on his shoulders, from angry outbursts in games to being a little too self-centered off the ice.

The character concerns are a major reason that Merkley, who was viewed as having the talent of a top-10 selection back in 2018, fell to where he did in the draft. In fact, it was a surprise on draft day when his name was called as early as it was by the Sharks when they took him 21st overall, just five selections after the Avs had taken Martin Kaut.

Once Merkley turned pro, however, a lot of the character questions died down a bit and when I reached out to some people from San Jose for perspective on how he’s handled the transition to being a pro, his maturity has been mentioned in positive light.

As a right-handed defenseman with average size (5’11”, 190 pounds), Merkley’s value and tantalizing potential lie in his smooth-skating and offensive nature. He has recorded 14 assists in 30 games this season and has 44 points in 93 career AHL games. While the defense is a major work in progress still, his offense is certainly nothing to dismiss out of hand.

In theory, he should be tailor-made to not only play in today’s NHL, but specifically flourish in an Avalanche system that wants their defenders to attack up the ice and put pressure on opposing defenses either with skating or stretch passes.

Merkley is certainly capable of having that kind of impact and the Avs getting him has to be the kind of thing other organizations feel uncomfortable with. From Ryan Graves a few years ago to Andreas Englund this year, Colorado has been able to turn reclamation projects into serviceable NHL players.

Merkley has more raw natural talent than all of those guys, which is where the appeal of this deal really comes through for Colorado. After trading away Justin Barron and Drew Helleson, the lone remaining impact D prospect in Colorado’s pipeline is Sean Behrens (read Meghan’s great update on him here!).

The addition of Merkley, who is just 22-years-old and in the final year of his entry-level contract, gives the Avalanche another young defender they hope Colorado Eagles head coach Greg Cronin can get to work on molding into an Avalanche defenseman. In fact, that was one of the first takeaways of this deal from Patrick Williams, who is one of the few reporters covering the AHL on the whole.

Defensive boot camp with Greg Cronin should be an excellent test for Merkley. Cronin will be on every single detail of Merkley's game like a hawk.#AHL

If the Avs help Merkley reach his significant ceiling, they have a massive steal on their hands a la Valeri Nichushkin. If they don’t, well, the cost of this deal makes taking the chance a palatable adventure.

The defense is a major question mark, however, and we will see just how dedicated Merkley is to honing his craft. If he doesn’t put in serious work on his in-zone defensive play and give a more honest, consistent effort, there’s a good chance this deal ends up being entirely about what Nieto is able to do in Colorado for the rest of this season.

There are no excuses in this organization. Merkley has gone from an organization that had lost its way at all levels and is embracing a lengthy rebuild (which helped lead to the player requesting out earlier this year) to an organization that demands excellence out of everyone every day. If Merkley thinks he’ll be able to come into the Avalanche and take days off, well, he can ask Kaut how that story ends.

The reality here is that MacDonald had gone from an intriguing utility player who could help Colorado at both forward and defense to a misfit at the NHL level that they were afraid to waive after watching Jayson Megna inexplicably get claimed by the Anaheim Ducks earlier this year.

MacDonald’s defensive play was so bad the Avs only turned back to him in that position when they absolutely had to and even then didn’t trust him with much ice time. He had been moonlighting as a forward, but only barely as he was regularly receiving under five minutes of ice time, which is what has helped create the extreme imbalance in usage in Colorado’s forward corps.

MacDonald simply fell out of favor here as the roster around him improved and/or got healthy and he became the odd-man out with the organization’s clear preference for Kurtis MacDermid to continue filling that hybrid role.

For Kaut, it’s a sad end to a story for a prospect who entered the organization with so much hope. It appeared he was going to be a real player for the Avs back when he made his initial nine-game appearance in 19-20, when he scored three points and was playing quality hockey.

The team decided to preserve his ELC, however, and send him back to the AHL. Kaut never really recovered from that demotion and despite being a very good AHL player, he scored just three more points in his last 38 games as a member of the Avalanche.

He got an extended look this year and had his flashes. There were games of his I really liked, but the consistency never got there and it appeared his most recent demotion back to the Eagles was the organization deciding to simply move in a new direction.

Kaut had passed through waivers twice earlier this year so the fact that the Avs were able to turn a player the entire league could’ve had for free (San Jose is maxed on contracts, mind you, so claiming him was not something they could really do) and combined him with a 29-year-old positional outcast to get both an immediate upgrade on the NHL roster and a prospect who could turn into an impact player for the Avs down the road is a seriously good piece of business from general manager Chris MacFarland.

Because the cost and upside both heavily favor Colorado, I’m grading this deal out as A-. It’s not my pig, not my farm, but the appeal of this trade from San Jose’s side simply doesn’t make much sense to me unless they are placing a serious emphasis on the San Jose Barracuda making a deep playoff run. At the moment that seems unlikely as they have a points percentage of just .450 and sit in seventh place in the Pacific Division, but they’re allowed to care about whatever they want.

From an Avalanche perspective, this is nothing but an easy win.

Sundays at the Rink: Avs breaking records, making deals, and giving back in a big way