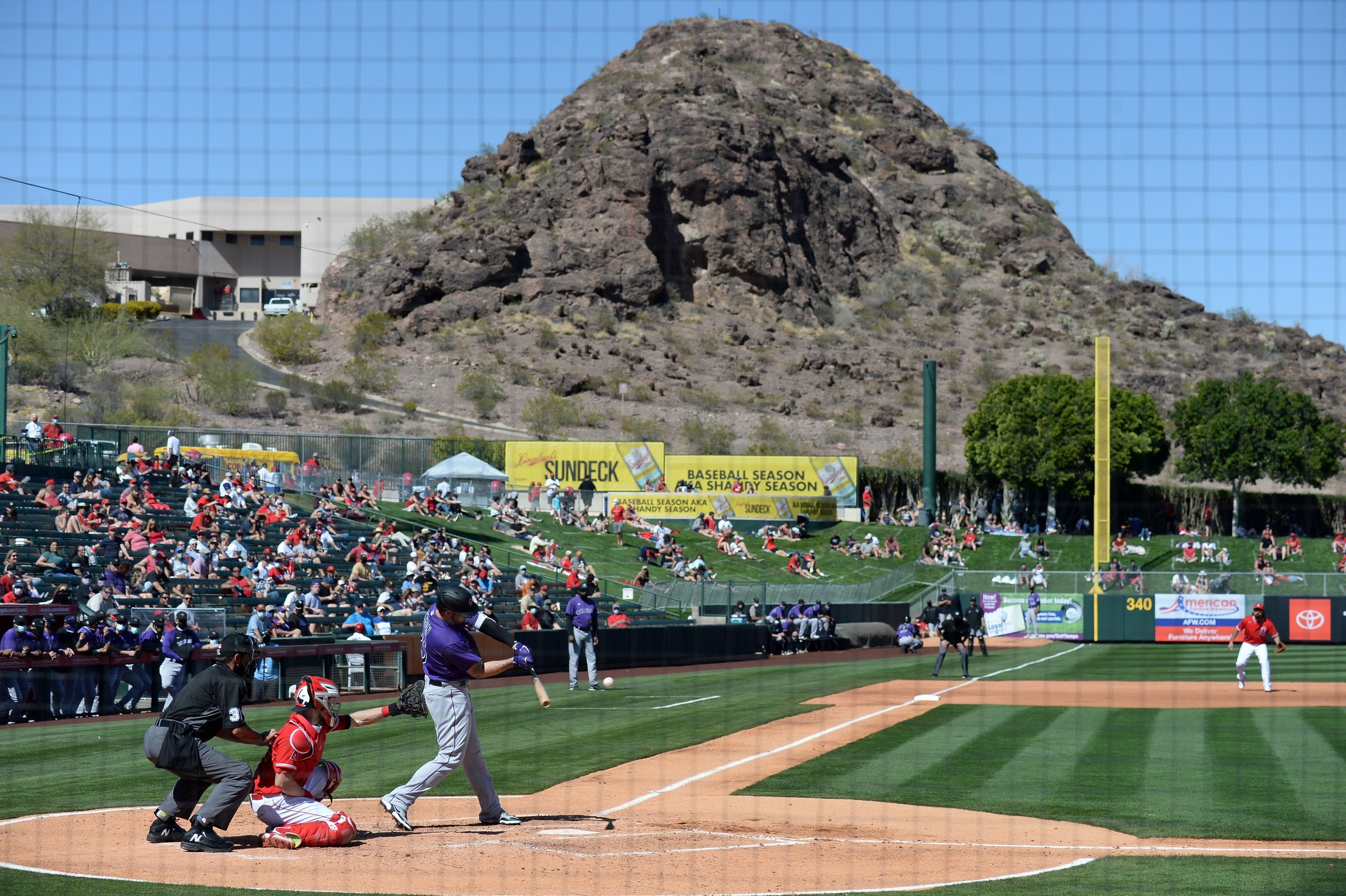 Gauging the early returns on Rockies’ Spring Training 2021; more going well than not

After a week of Spring Training games, the picture is beginning to develop for the Colorado Rockies.

We know the results from those contests should be taken with a grain of salt. The highs and lows must be viewed with an err on the side of caution. (Insert any other idiom you can think about for this time of the year.) Suffice to say, the details are still blurry.

If there are any indications by Colorado’s 4-2-1 record, it should be that these are nothing more than exhibition games, as indicated by the tie. Considering an inning can come to an abrupt conclusion with the bases loaded and only one out, we have to get used to the reminders that not everything that occurs in Arizona matters all that much.

One of the biggest positives so far is the return of fans to the ballpark. The announced crowd of 2,100 fans was a sellout on February 28 against the Arizona Diamondbacks and was the first Rockies’ game played with an audience since March 10, 2020.

Another strangle wrinkle this season per the MLB Operations Manual is games through March 13 being shortened to six innings upon mutual agreement by both managers due to limited player rosters as per the latest health and safety protocols.

Overall, it’s been business as usual for the Denver 9. At this stage, it’s still too foolhardy to make definitive statements about a week’s worth of games that has displayed both excellence and inferiority.

On one hand, the Rockies first loss of the spring came in a 10-0 drubbing to the World Champion Los Angeles Dodgers in just six innings of work. On the other, Colorado scored 10 unanswered runs, including six in the bottom of the sixth inning, to come from behind and beat the Athletics in Mesa, 10-7.

Keeping in mind there are 22 more of these glorified two-team practices scheduled for the month, here are the early takeaways from Scottsdale.

Left-handed pitcher Austin Gomber, acquired as the centerpiece in the Nolan Arenado trade, has been as good as advertised in two starts. He made his debut in a purple uniform during the Cactus League opener on February 28 and pitched two scoreless innings, allowing one hit, no walks and one strikeout. He followed that up with another pair of scoreless frames with only one hit allowed.

“I like the way that he attacks the strike zone,” manager Bud Black offered on the 27-year-old southpaw regarding the first outing. “He’s got an aggressive mindset. He’s setting the pace for the at bat. He’s coming after guys and throwing strikes. There’s a lot to like today. It’s a mix of four pitches that are quality.”

Staff ace German Márquez was outstanding in his debut on Sunday, pitching three scoreless innings, allowing three hits and one walk with one strikeout during the 1-0 win in Glendale. Ryan Rolison followed and was similarly effective during his first appearance with two scoreless frames, surrendering only a hit.

Helcris Olivares, the newest addition to and youngest member of the 40-man roster, has also impressed with a pair of scoreless appearances. Remarkably, he’s tied for the second-most innings (4.0) on the club.

Ben Bowden has done well across two outings and has injected himself into the conversation for making the Opening Day in a bullpen loaded with potential.

“I like the conviction he has for his fastball,” Black said of the 26-year-old left-hander still looking to make his Major League debut. “He believes in his stuff. We’re going to keep an eye on his, but hopefully it’s his time now.”

After waiting nearly a week to feature in a Cactus League competition, Trevor Story homered in second at bat, a three-run blast that was of much relief to faithful Rockies fans who saw several lineups sans the 28-year-old shortstop to open the spring.

Garrett Hampson began his quest to take over as the center fielder with base hits in three of his first four plate appearances.  His RBI single in the fourth-inning gave the Rockies their first run of the Cactus League season. Sam Hilliard has fared similarly at the plate, but also contributed two stolen bases in two attempts.

In the three-man competition for first base, Josh Fuentes has stepped ahead of the pack with a batting average of .400 (4-for-10) that includes two doubles and three runs batted in across five games while C.J. Cron and Greg Bird are each 1-for-10 entering Sunday’s game and have each struggled to make contact.

Yonathan Daza has a two-hit game under his belt and is tied for the most at bats (12) of any Rockies players so far. Black has taken notice of the rookie outfielder. “He’s proved in the Minor Leagues that there’s a hit tool in there. He’s gotta show it a little bit more consistently against Major League pitching. He fought off a pitch on the inside part of the plate and knubbed it through the right side. Those hits count.”

With two electric plays in the outfield on the first two days of Spring Training, outfielder Jameson Hannah has made a glowing impression thus far. He even broke up the no-hitter on Sunday against the White Sox with a single up the middle with two outs in the sixth inning.

After a tremendous step forward in 2020, Antonio Senzatela has been sidelined by a hamstring strain to start 2021. The 26-year-old threw a light side session on Sunday and is expected to miss a few starts.

Starting pitcher Ryan Castellani pitched two innings and allowed seven runs (four earned) on two hits with two walks against the Athletics, plunking two batters and failing to record a strikeout. “He’s got the weapons,” Black said following the outing, “he’s going to have to hone it in the strike zone.”

The three errors behind Castellani certainly didn’t do wonders for convincing doubters that the defense will rebound after the loss of their defensive leader this offseason.

Charlie Blackmon is hunting for his first hit (0-for-6), but has put the ball in play each time. (If you’re concerned about Chuck Nazty right now based on this data, you may want to have your head examined.)

Starting pitcher Dereck Rodríguez allowed two runs – courtesy of a home run by Dodgers’ Triple-A outfielder DJ Peters – and struck out just one in his two innings of work before rebounding in his second start with three innings, the first purple pitcher to reach the mark, and allowing two runs on four hits with no walks and two strikeouts.

Non-roster invitee Lucas Gilbreath, a native of Westminster who graduated from Legacy High School, made his first Spring Training appearance and struck out three batters with one hit and one walk in one inning pitched. In his second outing, he walked two batters on the way to giving up a run.

Black said of the latest Colorado baseball product, “He’s been on the radar about the last 12 months. Our player development people like what the arm, they like what he’s about. His velocity has picked up and he’s got a live arm. I think the future is bright.”

Believe it or not, Brendan Rodgers has over a year’s worth of MLB service time, yet only 32 games under his belt at the level. The 24-year-old second baseman has been questionable defensively in the early going, making two errors and misplaying another.

After settling in at the plate, he came away with the club’s second home run of the spring, going 2-for-3 in his first start at third base following three at second base.

“The more he plays, the more comfortable he’ll get,” Black said of Rodgers. “I think it’s natural for him to press right now. He wants to show that he’s the guy.”

Phillip Diehl’s second outing was rough: 0.2 IP, 5 H, 5 ER, 3 HR. On Sunday, he was back out getting the final three outs of a 1-0 ballgame and facing off against to power hitters – Eloy Jimenez and White Sox top prospect Andrew Vaughn – who could have easily tied the score with one swing of the bat. Instead, it was a 1-2-3 inning with two strikeouts and the first save of the exhibition season.