DENVER – When Kyle Freeland left Saturday’s game with a 6.71 ERA, it was highest earned run average since the first outing of his 2018 season.

The biggest difference between those figures: his 6.75 ERA on April 3rd last year came in just 5.1 innings while the entirety his 2019 ERA has been over 56.1 innings.

The biggest issue for Freeland this year: home runs allowed.

During his 4th place finish in the NL Cy Young Award voting, the Denver native scattered 17 home runs over his 33 starts. In 11 starts this season, Freeland has already surrendered 14 home runs.

On Saturday night, the Orioles would score the first runs of the game; however, it would not be via the long ball.

Jonathan Villar would double to left field with one out in the first. Then, Baltimore would hit three consecutive singles just out of Trevor Story’s reach to score two runs.

Renato Nuñez would add a third run for the O’s on his 12th home run of the season, a solo shot that would give him home runs in four straight games.

Colorado would take a 4-3 lead in the bottom of the third on a three-run homer from Nolan Arenado, the 200th of his career.

But Freeland would give away the lead in the next half-inning that culminated in four runs for the Birds all on two outs.

So, after he made the final out of the fourth, Bud Black lifted Freeland in favor of Chad Bettis to start the fifth.

The Rockies offense responded in the first and third innings. Rather, it would Arenado who responded each time he’d come to the plate.

In the first, Arenado would match Story’s one-out double for his 38th RBI of the season.

His next at bat in the third would produce a three-run homer, the 14th of the season and 200th of Arenado’s seven year career.

Not to be outdone, Arenado would drive in his fifth run in the fifth inning, a single that score Story once again.

Chris Iannetta would put a charge into one the opposite way 375 ft for his third home run to put the Rockies to within a run in the 6th.

In just his second game since May 12th, Seunghwan Oh allowed three straight batters aboard one a walk and two singles before getting an out. Jake McGee would enter and two hits and two runs, both of which would be credited to Oh.

Alas, hopes of late-inning heroics would end after the sixth when 28-year-old rookie Josh Lucas would finish out the final three innings for his first career save.

Rockies and Orioles meet again tomorrow at 1:10pm for the rubber match when RHP David Hess (1-6, 6.75) takes the mound for Baltimore against RHP Antonio Senzatela (5-2, 3.38 ERA) of Colorado. 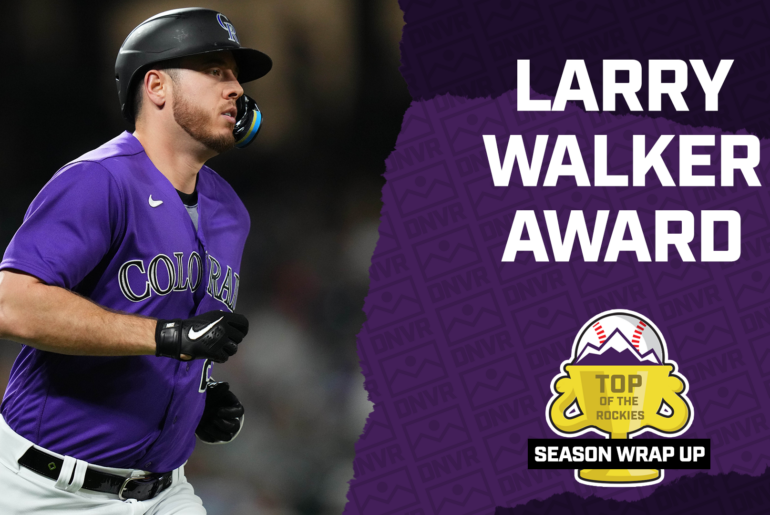 Most Valuable Player: Cron edges Rodgers as the Rockies top performer in 2022

DNVR Rockies Podcast: Bryce Harper and Philadelphia Phillies down to last games against the Houston Astros