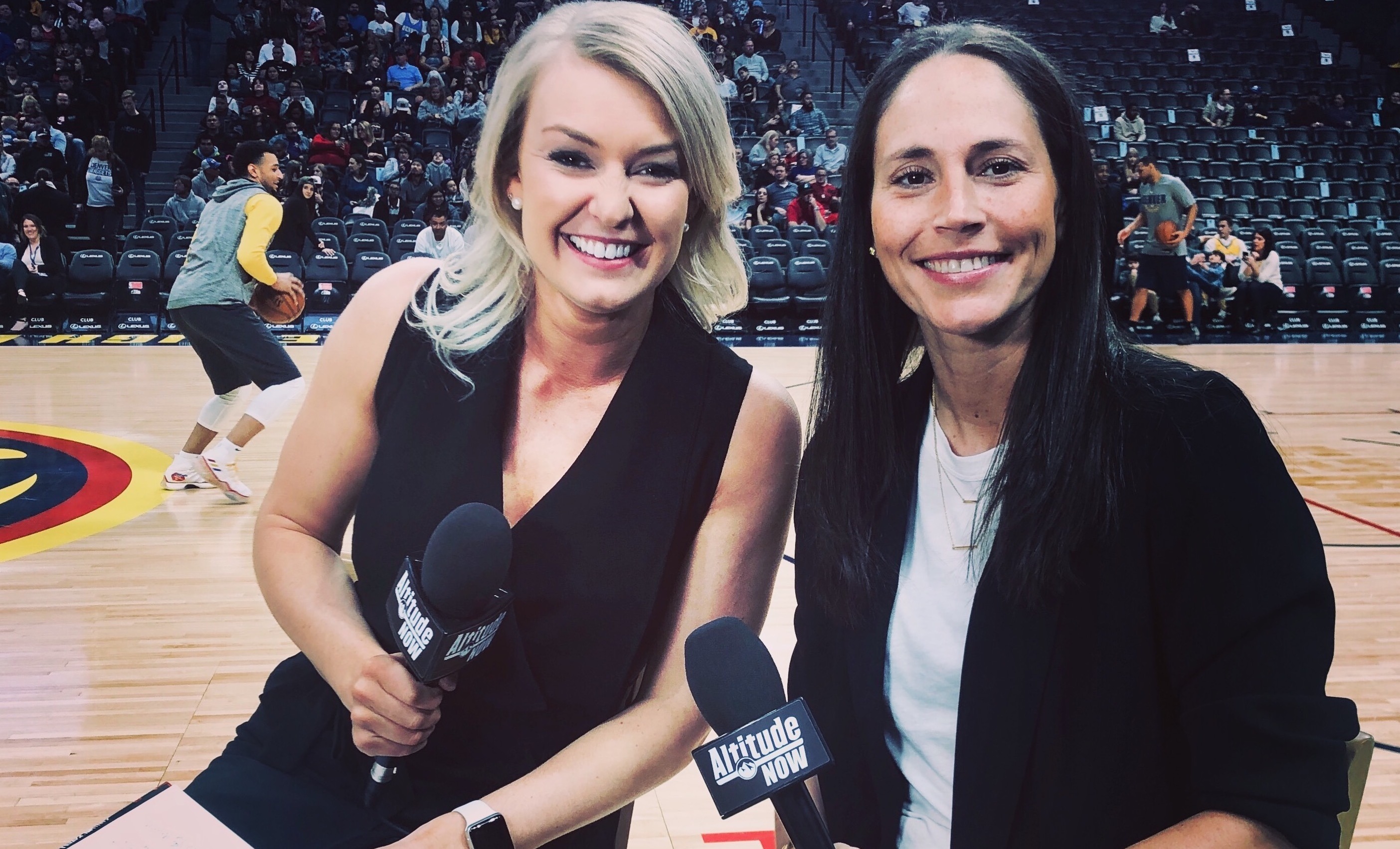 “For so long, it’s been the boys club from the top down”: Katy Winge is striving to break stereotypes in a male-dominated industry

A little more than 24 before Katy Winge made history as the first woman in Altitude TV history to serve as a color analyst during a game, she still wasn’t 100 percent sure it would actually happen.

Altitude producer Scott Bay had floated the idea to Winge over the last couple of weeks that he might be able to get her in the booth alongside Chris Marlowe and Scott Hastings on International Women’s Day, March 8 against the Warriors. But the logistics at Oracle were tough. Among them, the arena’s cramped sidelines meant that there was only room for three at the announcing table. If Winge was going to sit alongside the Nuggets’ regular two-man team, they wouldn’t have room for the station’s ever-present stat guy.

It wasn’t until their pre-production meeting on March 7, a day before Winge’s booth debut, when confirmation finally came through that she’d make history the next night.

“What an incredible opportunity,” Winge said thinking back to what ran through her mind the moment she got the news. “But make sure you’re ready to own the opportunity.”

Winge was a natural in the announcing booth for the first time, providing color to what turned out to be a Nuggets’ 122-105 loss and flaunting the innate knowledge for the game and basketball IQ that she prided herself on over the four seasons that she played at Illinois State University. There, she got her feet wet in the media world. Winge declared marketing as her first major, seeing the degree as a path to get into sports or advertising, but because of the summer commitments that came with playing for the Redbirds, she was required to be on campus year round, which she looked at as an opportunity to get two degrees. Winge landed on journalism to complete her double major and soon found herself honing her on-camera skills in the basement of Illinois State’s Communications building and filming local television bits where she’d interview her teammates for segments focused on both on- and off-the-court topics.

As Winge’s confidence on camera grew, her preferred career path gradually came into focus. She was already producing sports shows and had gotten reps as a sports anchor for Rochester, Minnesota’s local Fox 47 television station, and as Winge navigated her way through the master’s program at Northwestern University’s prestigious Medill School of Journalism, she began to look for a post-graduation landing spot where she could put her on-camera talents on display. During her last quarter of graduate school, Winge blocked off one hour every day to scour NBA websites for the right opportunity. Eventually, she applied for the in-arena reporter job with the Nuggets.

Her first interview went well. Her second, where she FaceTimed into the Kroenke Sports and Entertainment offices and got passed around a table on an iPad fielding questions rapid-fire style, she thought she bombed. Winge was upfront about the fact that she grew up in Minnesota as a diehard Timberwolves fan and admitted that her knowledge of the Nuggets organization and its players was a little rough around the edges, which from the way the interview went seemed like a requirement for the role.

“I thought I blew it,” Winge said. “I thought there was no way I was getting that job.”

She ended up nailing the interview. Winge was soon en route to Colorado, and after one season as the team’s in-arena reporter was hired by Altitude as their first female analyst. Her debut in the broadcast booth came five months later.

It was fitting that Winge made history with the Nuggets, who hired WNBA legend Sue Bird to their front office last summer and play just a few blocks south of Coors Field, where last season Jenny Cavnar became the first woman to call the play-by-play action in the television booth of an MLB game in 22 years. Winge credits Bay and Altitude TV’s Executive Vice President Kenny Miller for believing in her, pushing her every day and as she put it, not seeing gender.

“If you don’t have guys at the top fighting for you in this battle, nothing’s ever going to change,” said Winge. “We can push for it all we want, but if the higher-ups aren’t going to be like, ‘This matters and there’s value in this,’ it won’t matter. You need to have those guys on your side.”

“For so long it’s been the boys club from the top down. The fact that our industry is becoming more and more diverse, and it’s not just gender, it’s race, it’s everything. The more that the top is embracive of that and understands that, look, the more voices we have, the more people from different backgrounds and experiences we have, the more colorful everything’s going to be. The more people you’re going to relate to, the broader your audience is going to be. More creative ideas are going to be brought forth.”

Even in 2019, women holding prominent positions across sports is still rare, but the NBA is leading the charge to change that notion. The Indiana Pacers recently hired Kelly Krauskopf as their assistant general manager. Becky Bonner is the Orlando Magic’s director of player development and quality control. In the NBA league office, women hold high-level executive positions as well. Becky Hammon has quickly risen to one of Gregg Popovich’s top assistant coaches in San Antonio.

Female color analysts in NBA broadcast booths are still few and far between, but the uphill battle is heading towards a ceiling that seems to be cracking more and more every year. Doris Burke became the first full-time national NBA TV analyst just two seasons ago. Kara Lawson, who calls games for NBC Sports Washington and Sarah Kustok of YES Network, who Winge cites as a role model and someone she’s maintained a relationship with for years, are both full-time analysts. Turner’s Candace Parker has been one of the breakout broadcast stars of this season.

“It’s just the beginning for women in this world and in this industry,” Winge said. “I feel so fortunate that I have role models to look up to and to know that they went through this. I think about all the women who have come before me. The first woman in the locker room, the first women to be in the situations I find myself in every day. I can’t even imagine what that would have felt like. There are days when I’m in the Nuggets’ locker room and look around and think ‘I’m the only woman here.’ But I don’t even think twice about it. It is what it is and we’re all trying to do our jobs. It’s just a fact.”

Winge hopes to one day cover the entire league or develop her own studio show like The Jump, ESPN’s daily NBA discussion/debate program hosted by another Medill alumn, Rachel Nichols, where she can talk basketball but also interview players about topics that go beyond the hardwood. In Winge’s current role, which more often than not has her roaming the Nuggets’ sideline during games, she does just that. This year she’s conducted a number of in-depth interviews during games that venture well beyond the basketball court, like when she spoke with Monte Morris’ high school coach during the Nuggets’ visit to Detroit about what Denver’s backup point guard means to his home state and the Flint, Michigan community where he grew up.

However her role at Altitude develops, Winge wants to keep pushing her boundaries and changing the stereotypes assigned to women in her field.

“The door opened for women to flood into these roles but now we’ve almost been pigeonholed as sideline reporters,” Winge said. “The pretty girl who can talk on camera and is OK at asking questions. It’s given a lot of people a lot of opportunities to prove that stereotype wrong, and I think that we have pushed that to the highest degree.

“But now, it’s what’s next. How do we work one step further than that? It’s taken a while to even evolve to this. Now that we have Candace Parker working in the studios in Turner, Chiney Ogwumike at ESPN. The more that we can filter in women who are relatable and know their shit, are confident and don’t care about the bullshit, the more people are going to be accepting of it and want that.”

Winge welcomes the responsibility of blazing a trail that young girls looking to get into a challenging field can follow. She was floored by the outpouring of support that she received on social media after her first game in the booth when parents of young girls reached out to her to say how special it was that their daughters could watch Nuggets games and see her breaking ground as an analyst. She wants to send the message right back to those same girls who want to cover basketball and the NBA that they can achieve those dreams if they want it bad enough.

“It was crazy for me to dream this, this job,” said Winge. “I knew this was what I wanted. I was like ‘This is what I’m setting out to do.’ Now that I’m here I’m so grateful for it, I’m so humbled by it, and I’m growing and learning every single day. But now it’s like ‘OK, I accomplished this. What do I want to do next?’”

Next for Winge, who’s not scheduled to appear in the booth again this season, is covering what she hopes is a long and fruitful Nuggets playoff run, one that begins in just under three weeks. And in the back of her mind she’s always looking to push the envelope in her current role on the sidelines, as a part of the team’s radio broadcast and in Altitude’s studio, where she’ll appear on the Nuggets’ pre and postgame shows.

It’s not difficult to imagine Winge in the broadcast booth full-time one day even if the odds are stacked against her. 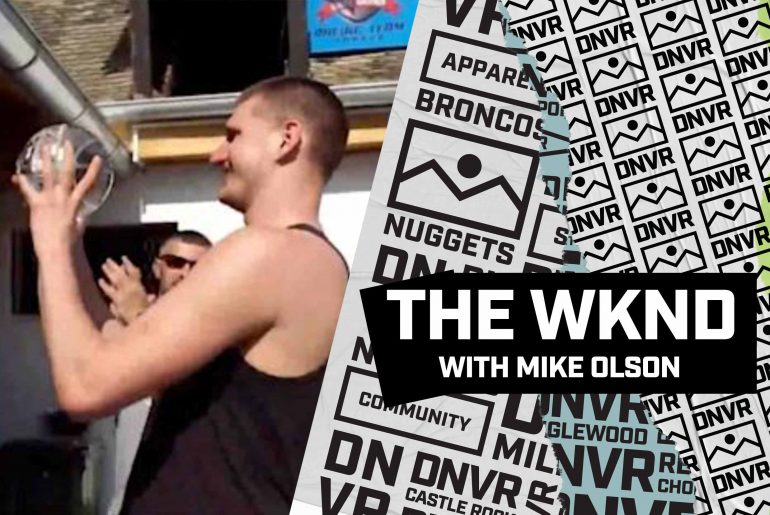 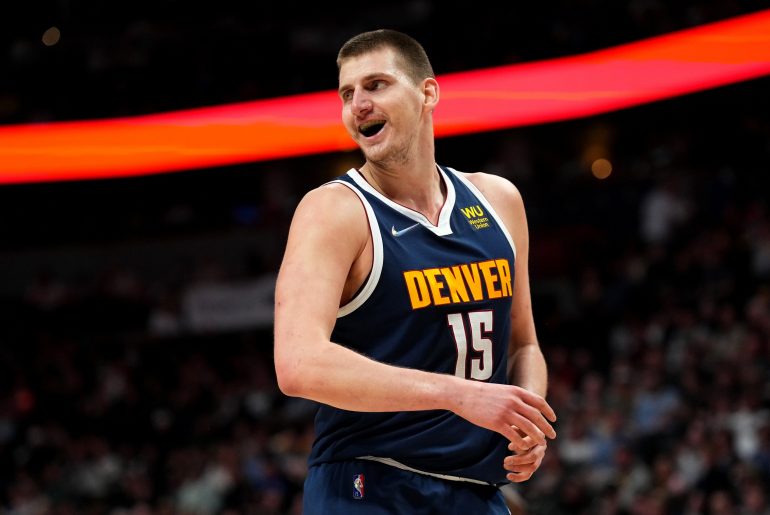