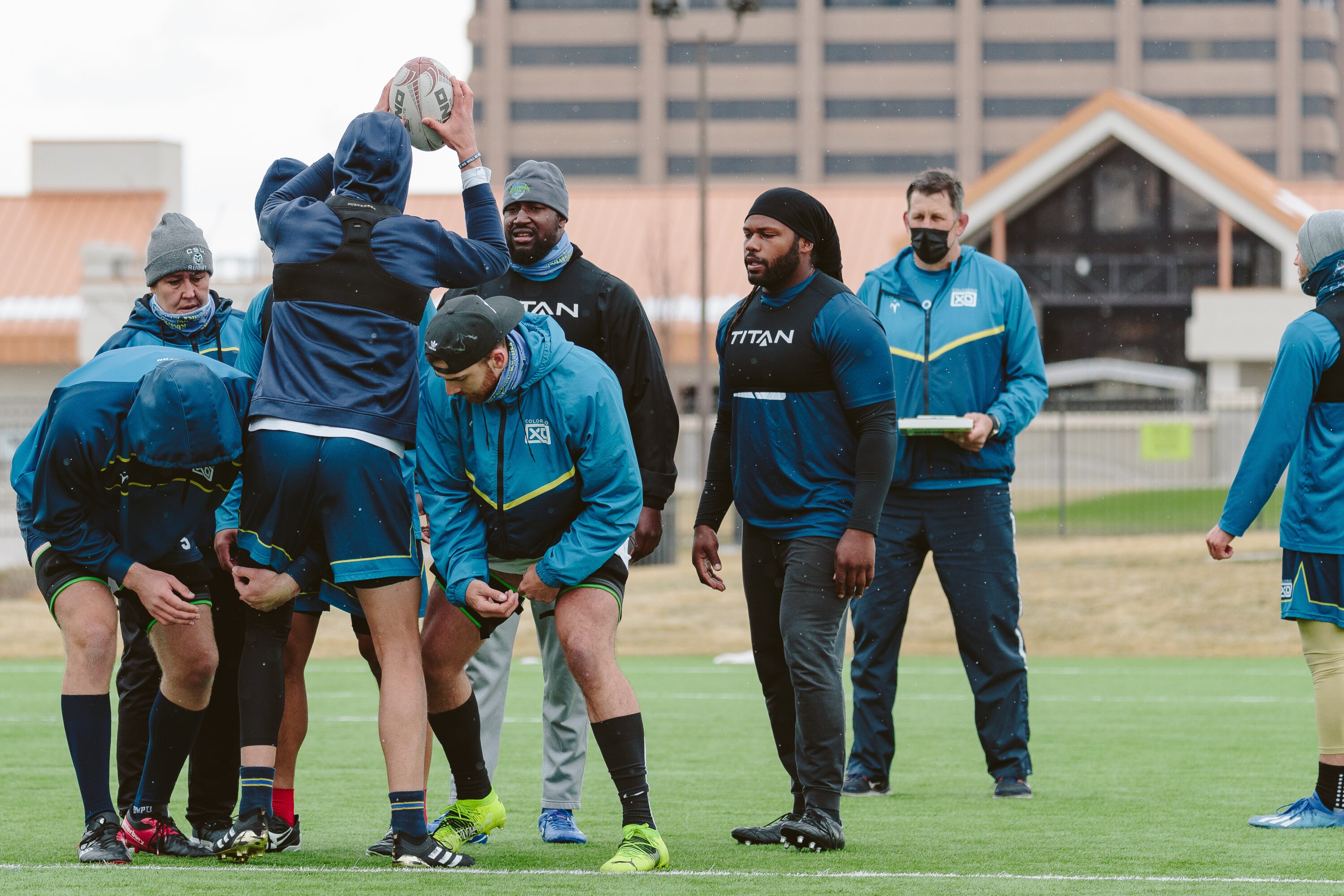 Falling in Love With Rugby

The 35 players that make up the Colorado XOs all have something in common.

It’s not they are rugby players. In fact, only nine of them had ever played rugby before accepting a contract with the team.

It’s not even that they’ve all played football before. A handful of players on the team didn’t play football growing up.

The one thing that the entire roster has in common is that they’ve all been rejected before.

“We all got told no at a certain point in time and that’s something that we all have in common,” Colorado XO loose forward and former Ole Miss defensive end Vic Evans said. “We all got told no, and the door got closed or people quit on us or people turned their backs on us, but we are all here at the same point trying to find a new route for ourselves and the only person in control of that is us.”

Evans is right. In some way, shape, or form, every player on the XOs’ roster has dealt with some type of rejection in their athletic careers. There are a handful of players on the roster that have either had stints in the NFL or attended a camp hosted by an NFL franchise. There are players that didn’t get their chance to make their case for a spot on an NFL roster because the pandemic canceled their pro days.

What they are coming to learn is what a lot of people learn once they get involved in the sport.

They’re learning to love it.

“I just fell in love with it when I first touched down for camp,” XO tighthead prop Garrald McDowell said of his rugby experience thus far. “It was different to me. I like adversity, and it was great adversity for me. God was telling me that I can love this sport, enjoy it, and continue to get better at it.”

McDowell has been with the XOs since the camp that Glendale’s rugby department held in November. He’s the prototypical player for the XO initiative. He’s big. He’s listed on the roster at 6’1”, 275 pounds. McDowell played defensive end at Ole Miss from 2014-2017 before transferring to the University of Lousiana at Lafayette for the 2018 season. He played well enough during his redshirt senior season at Louisiana to earn a contract with the Calgary Stampeders of the Canadian Football League.

As a defensive end on the gridiron, the tackling and physicality of rugby is nothing new to McDowell. What’s taking some getting used to is carrying the ball for the first time in a while.

“The last time I carried the ball was in high school,” McDowell said. “I get the chance to carry the ball in rugby and I love it. I love running over people.”

You don’t have to look far to find players in the same boat as McDowell. Gelen Robinson, the XOs’ hooker and vice-captain is listed also at 6’1”, 275 pounds, and played defensive end at the University of Purdue before playing for the San Diego Fleet of the Alliance of American Football and the Dallas Renegades of the XFL. Tani Tupou, listed at 6’1, 290 pounds is playing loosehead prop for the XOs and is a three-year NFL veteran that spent the majority of his time on the defensive side of the ball for the Seahawks, Falcons, and Cardinals. That could very well be the XOs’ front row on any given Saturday.

Another player that fits this mold is flanker Tre Smalls. Listed at 6’1”, 260 pounds, Smalls played defensive end at North Carolina A&T State before making the switch to rugby.

“Oh, I love it,” Smalls said of the transition to rugby. “It’s great competition. I get to build friendships with my teammates. We’re constantly getting better every day and every game.”

Smalls has picked up the game quickly. An already strong tackler, Smalls is enjoying the freedom that the inherent nature of rugby grants to the ballcarrier, and even notched his first try in the XOs’ third match of the spring – a 38-28 victory over Belmont Shore in California.

.@tbigs41 secured his first-ever try and the XOs' fourth try of the match when he peeled off the back of the scrum and snuck into some space down by the goalpost!#RTNTC | #Mission23 pic.twitter.com/b1hOHuyHul

“Being able to carry the ball here is really amazing,” Smalls said. “(Director of Rugby) Mark (Bullock) said it. He said that you’re the quarterback when you have the ball. I can dish it off, I can carry it, and I can use a little bit of footwork to break that line. I am really enjoying carrying the ball.”

Rugby hasn’t been what Smalls expected up until this point, but he doesn’t mean that in the way that most people would think.

“I expected it to be a lot harder,” Smalls said of the transition to rugby. “Coming in, I didn’t know if I could keep up.”

Jarrell Patterson is another player that wasn’t sure he would be able to hold his own against some of the bigger bodies that he knew that he’d face as a wing.

“I knew that for me, it was testing my ability to hit guys twice my size or bigger than me, to know that I can win one on ones, and I have proven that to myself and I am proud of myself for that,” Patterson said of his experience so far. “It’s all about proper tackling to protect yourself so you don’t put yourself out.”

“Phlea” – as he’s nicknamed – comes to rugby from the Professional Developmental Football League and is one of the older players on the team. Despite picking up the game later in his athletic career, Patterson has been an integral part of the XOs’ attack through the first four matches. He scored the try that slammed the door on any chance that New Orleans RFC had at a comeback during the XOs’ first match and has proven in the matches since then that he is a strong runner with the ball in his hands.

The fourth and final try from Saturday's match was scored by Jarrell Patterson who received a ball in space from @danstone37!#RTNTC | #Mission23

Most importantly, he’s having fun while he’s doing it.

“Aw man, I enjoy this,” wing Jarrell Patterson said. “I honestly wish that I knew about this in high school. Rugby is fun. It’s a gentleman’s but it’s for warriors and I like that. As a small guy, I enjoy it.”

“As a team, getting better,” Smalls said of what he expects to see as the spring season progresses.”We cut down about 10 turnovers in the Belmont game. In the first game, we had 24, in the second game we had 23, and in the Belmont Shore game, we only had 15 turnovers. That’s a huge jump. That’s great progress. I am looking forward to seeing how it all comes together over the course of these next couple of games because we are going to be good.”

The XOs have compiled a 3-1 record through their first four rugby matches, and are only getting better. While there is still plenty to work on, the progress is palpable. When you enjoy what you do and the people you do it with, it’s makes the journey that much better.

“I love the teammates,” McDowell said of learning the game with the XOs. “We bond every single day every minute. We are all developing, continuing to get better and we push each other.”