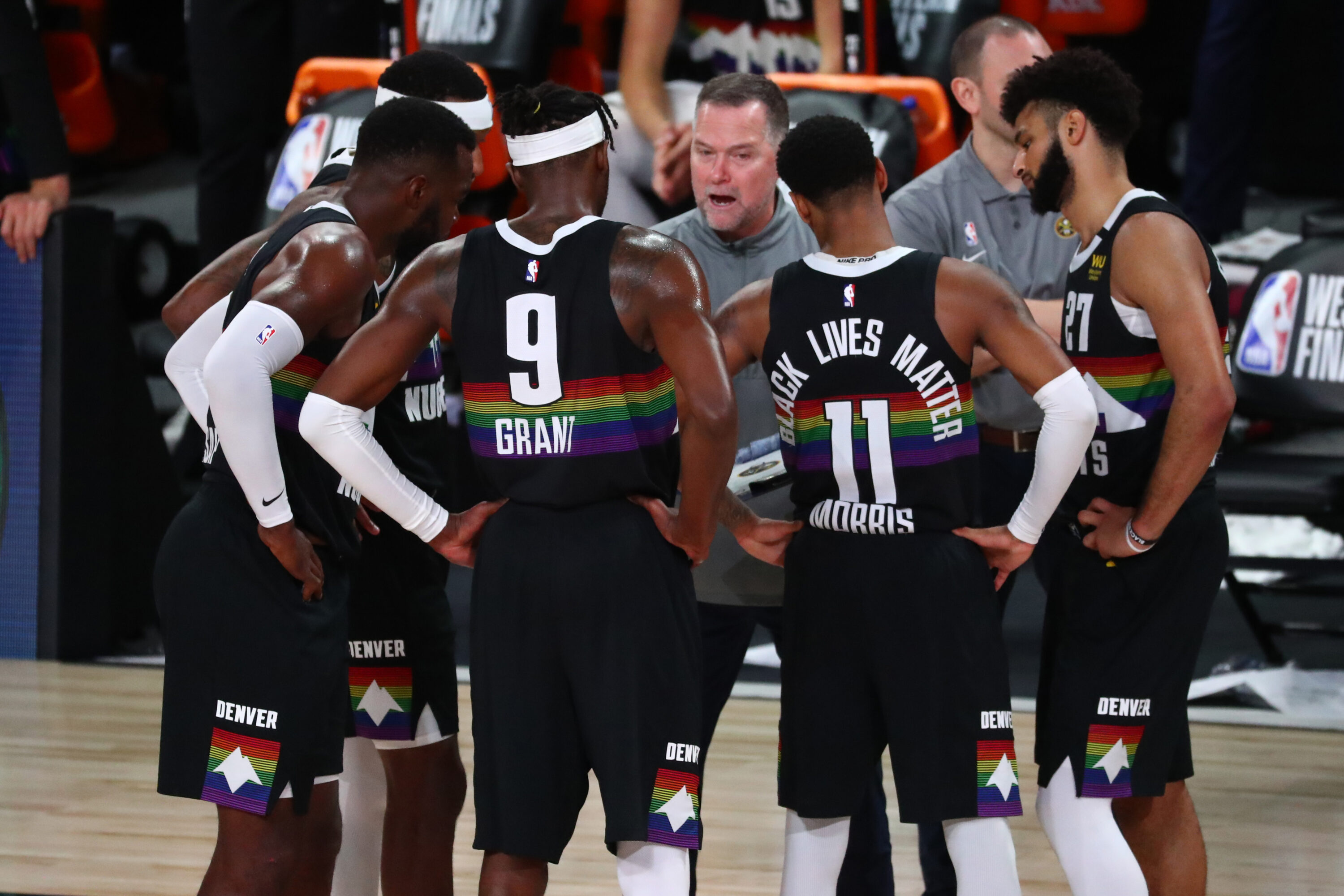 There is only one way for the Denver Nuggets. There is only the hard way. After falling just short in Game 2 and dropping a close Game 4 by the score of 114-108 Thursday night, the Nuggets are down 3-1 for the third time this postseason. No team has ever erased three different 3-1 deficits in a series. Of course, before these Nuggets, no team had accomplished the feat twice in a row either.

The Los Angeles Lakers made a notable adjustment to their starting lineup before Game 4. Dwight Howard started over Javale McGee and provided the Lakers with a huge spark. The Lakers returned to their zone defense at the top, and Denver balked initially. A passive Nikola Jokić appeared either bothered by Dwight Howard or checked out to some degree. In a little over 9 minutes, Jokić shot just once and recorded zero rebounds, while his counterpart, Howard, went for 8 points and 8 rebounds, including four on the offensive end, in the same amount of time.

Anthony Davis wreaked havoc in the opening quarter, putting up 14 points on 6-of-6 from the field. Denver made him work, but his jumper was pure, and if not for Jamal Murray, the Lakers might have built a devastating lead early. While Jokić wasn’t aggressive enough, he was seemingly content to act as a decoy initially. Howard is obsessed with slowing him down, to the detriment of the defensive scheme at times, and Murray ran free as Jokić kept Howard busy. Murray’s 12 point quarter on 6-of-7 shooting held the deficit to just 7.

Denver limited their unforced errors but was outrebounded 12-5 in the opening quarter. Millsap found himself in early foul trouble, and Malone went to Torrey Craig initially, and the smaller lineup couldn’t control the glass. The Nuggets caught a break in the second quarter as Davis cooled off, and the Lakers shot just 34% from the field. Denver clawed back and almost busted out for a big run of their own, but Michael Porter Jr. missed a handful of wide-open looks, and the Nuggets couldn’t quite make the most of the swing. Porter would heat up later in the quarter, hitting a three and finishing with seven points, while Jokić responded to his lackluster first with 8 in the second.

The Lakers took an uninspiring five-point lead into the half.

The Nuggets won the rebounding battle in the third despite just 2 minutes for Paul Millsap, and wouldn’t you know it. They won the quarter too. The Nuggets cut the lead to three, and yet another comeback felt imminent. But they couldn’t bring it home in the fourth.

Denver battled to keep it a two-possession game late into the fourth. Murray had that looked in his eye, determined not to let his team lose. LeBron James must have noticed and switched onto him late in the game. Murray had no trouble blowing past James on two drives, but James recovered nicely on both drives for two controversial contests at the rim. “Controversial” is a weird way of tip-toeing around what we all know — one of those contests was a blatant foul. But the refs swallowed their whistle. Davis and James combined for 15 free throws in the quarter, while the Nuggets shot just 9 as a team.

The Nuggets had their chances to close the gap. The Lakers finished with 13 rebounds in the fourth, including three offensive boards — two of which came in the closing minutes as the Nuggets stood and watched the biggest misses of the game.

And so the Nuggets trail 3-1 again. They’ve played the Lakers tough, but it will take an extraordinary amount resiliency to avoid a gentlemen’s sweep, let alone another comeback. Do they have it in them? Probably not, although I’m pretty sure I wrote something similar in the second round. The Nuggets might lose, but they won’t break.

Murray was sensational Thursday night, scoring 32 points on 20 shots, and seemingly half of them were off the charts in degree of difficulty. He hit off the dribble mid-rangers, bullied his way to layups, drained left-handed shots, and produced MJ-Esque finishes around the rim all night.

He was so close to good enough and probably robbed of an opportunity to close the deal down the stretch. But his teammates let him down as much as any referee. The Lakers finished the game with over 25 second-chance points. That’s the real backbreaker.

Grant was aggressive early and turned in a similar effort guarding LeBron James as he has all series. Of course, James went to the line 14 times in Game 4. Grant will have to balance claiming responsibility and to dismiss some of those as uncontrollable. The Lakers sent a formal pitch to the league to review and reassess the way James is officiated. Teams do this. It isn’t new. But it’s going to be a story when the free throw attempts jump up like that overnight.

Porter finished with 13 points and 8 rebounds on 5-of-8 from the field. He warmed up in the second quarter but missed a couple of open looks that might have opened the flood gates for Denver. Of course, the defense left a lot to be desired, and for the first time all series, we saw LeBron James go mismatch hunting as he locked onto the rookie like a fear-seeking missile.

Morris finished with 12 points and 4 assists on 4-of-7 from the floor. He missed both of his threes, however, and wasn’t a particularly stout defender.

The plus/minus king finished in the positive again, but even Jokić-loyalists must concede something looked off Thursday night. Only one field goal in the first is enough to make you scratch your head. He might have undone the passivity with strong play in the clutch, but he barely looked like he wanted the ball. He was scoreless in the fourth quarter.

Jokić bounced back after a near career-altering blunder in Utah, kicking it into First Team gear. They’ll need the best basketball of his career to pull this off.

Craig played 19 minutes due to Millsap’s foul trouble. He finished a -17.

The Nuggets wouldn’t be here without Harris. But they won’t go any further if he doesn’t either step up or slide into a bench role. He’s just not making a positive impact out there.

Two playoff runs later it’s probbaly fair to view Plumlee as a good backup across 82 games, but not someone who can be counted on in the postseason — even in small doses.

For making fun of Dwight Howard.