Let me introduce you to Boston-based startup UmpScores; this will change the way we watch baseball.

For so long, such a fundamental part of the game – the calling of balls and strikes – has been relegated to an odd kind of ambiguity. Imagine if the NFL refused to even try to accurately measure yards or the the NBA was fine with randomized basket heights, maybe even from play-to-play.

This is the reality that baseball has had to live under since its inception. The powers that be could always hide behind the fact that their general audience would simply have no way of constantly checking and tracking all of the missed calls behind the plate.

Well, now you can.

No longer will defenders of the status quo be able to obfuscate the issue by suggesting that “it all balances out” or “you’re just mad the call went against you” or “it doesn’t even matter that much anyway.” Now we can check.

Thanks to founder Mark T. Williams and his cracker-jack team of analysts, baseball fans will now have the ability to sort through data on umpires and missed calls in exactly the same way we can for the ballplayers. There’s an app for it. It’s called UmpScores.

You can check out the website and download the app for 99 cents here. Perfect for a game of nines.

When reached for comment by DNVR, Williams summed up the application as such: “UmpScores is the digital version of baseball cards for umpires. Statistics that can be used to measure objectively, plate umpire performance.”

We asked Williams about his primary reason for developing this app and he responded, “MLB has a problem behind home plate: too many incorrect calls are being made that impact the game. On average, MLB umpires miss more than nine percent of pitch calls.  UmpScores is a self-funded labor of love and designed to fix this problem by providing fans with key pitch-calling statistics, ratings and greater performance transparency. MLB privately rates their umps. Why shouldn’t we be able to do so, too?”

You want to know which teams and which players are getting the benefit of the doubt most often? Want to know who is getting the short end of the stick? How many pitches individual umpires miss per game or per inning? And, because it’s almost the year 2020, would you like to have all of that updating in real time and available in the palm of your hand? If so, Christmas has come early this year.

You may remember Williams from earlier this season when he unveiled his research showing that over 34,000 ball/strike calls were missed in 2018. He then made an appearance on the DNVR Rockies Podcast to discuss how this data was cultivated, note that it’s remained at this high level for 2019, and began to muse on what should be done with it.

UmpScores is the result of those efforts.

The app allows baseball fans to sort through information about umpires and missed calls the same way they can for literally anything a player does between the lines. Umpires are graded and ranked based on performance (again, just like the players) and at a glance you can see how many calls they miss per game or per inning, if they tend to favor pitchers or hitters and even which ballparks and weather conditions tend to effect their accuracy.

There is even a fun bracket for this year’s postseason where you can track each member of each crew for each series. This also allows those in appreciation of umpires to celebrate the best in their craft since we’ll have a much better indication of who the truly great ones are.

“UmpScores uses digital technology to create a new dimension to baseball where fans know the person behind the mask, can quickly identify those star performers and those that need improvement,” says Williams, who also provides a ton of information on the difficulties and challenges that these human beings face.

Because the information is all fact-based, the narratives can be derived by each individual, even those that are positive. “One measure of this app’s success will be when it is commonplace to see fans wearing the jersey of their favorite home plate umpire,” Williams added.

This collection of data should help guide decisions on who is assigned to what games and also to give us a concrete foundation for the debate over a technology-enhanced methodology for making these calls.

For example, we at DNVR have been asked many times about the potential of a challenge system that allows for teams and players to check on the most egregious of calls. They could throw the proverbial red flag, we could all get a replay on the big screen like they do for tennis, and then get the call one way or the other and move on.

It sounds nice and even potentially entertaining, but it’s also worth noting that, according to UmpScores, there are 22 umpires who average over 15 missed calls a game with Laz Diaz at the top averaging 17.25. That’s a whole lot of stopping to check. Or maybe that is an acceptable amount to you. Either way, we now have the facts of the case.

This gives us a much better understanding of the issue at hand and how it needs to be solved.

Here is another one.

Wednesday evening, Tom Hallion will be behind the plate for an all-important and decisive postseason game between the St. Louis Cardinals and the Atlanta Braves. Tied at two games apiece in the NLDS, it’s win or go home in Game 5. Conventional wisdom would suggest that Hallion must be among the most qualified candidates in baseball to be handed such power in such an important contest.

About 20 percent of the time, when the four-seamer is thrown in the lower strike zone, he calls it a ball. If you take a longer look at his historical stats, it also looks like he may have already peaked last season. Even at his best, he was merely a 3-star ump.

This is the umpire equivalent of batting one of the worst hitters in your lineup in the cleanup spot for the big game.

Here is what it looks like in the app: 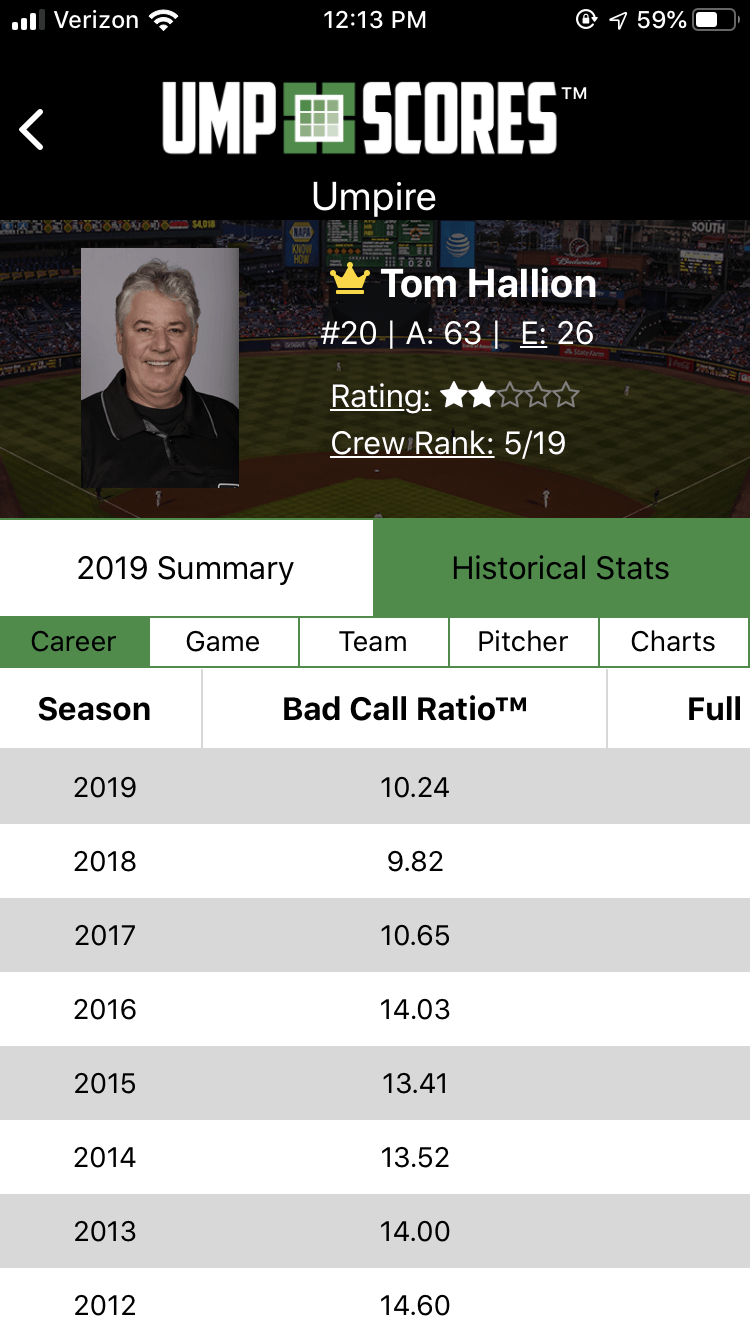 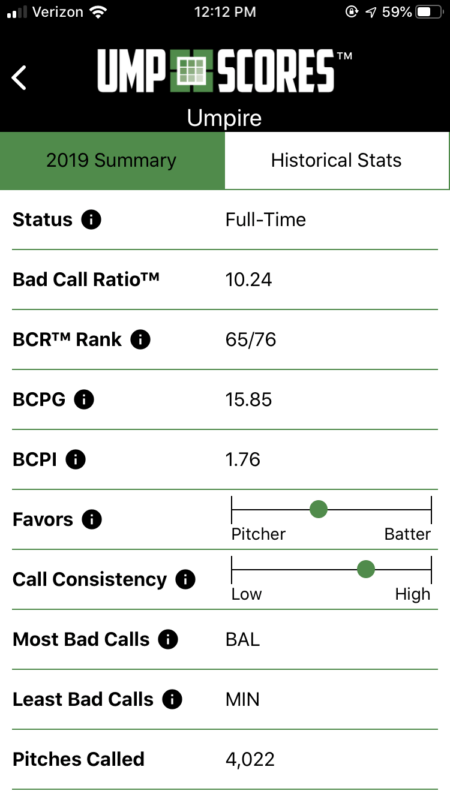 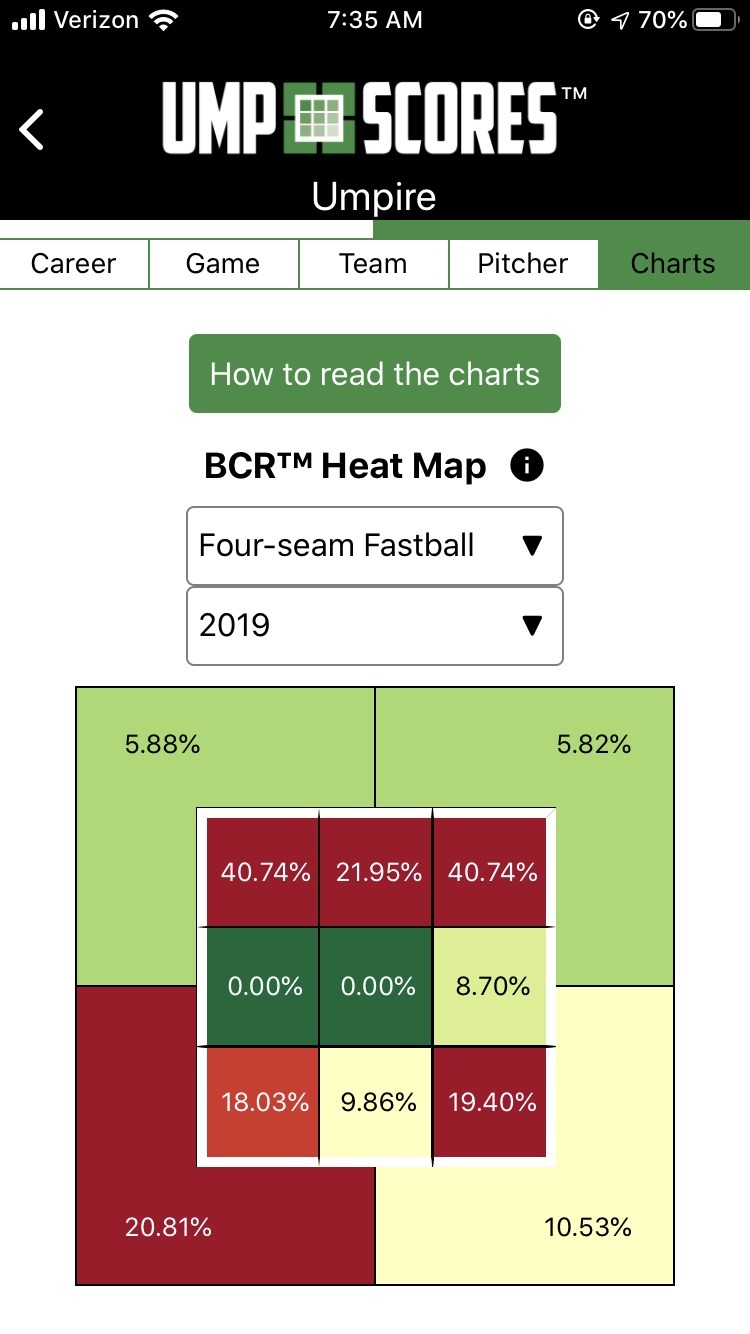 Not only is he missing a lot of calls outside the zone on the left side of this chart – calling balls strikes – but way too many right down the middle and middle-low are strikes getting called balls.

MLB is fond of telling us that they have a vigorous evaluation process for these umpires but how is it possible that somebody who ranks so low could be the man in charge of the most important game of the season for these two teams?

As you can also see, data can be sorted to display an umpire’s history with specific teams and pitchers.

The nightcap features Stephen Strasburg vs. Walker Buehler with Alphonso Marquez calling the balls and strikes. Quickly looking through the app, Marquez has roughly equal histories with the two starters, sporting a Bad Call Ratio™ of 8.14 for Buehler and 8.31 for Strasburg, both lower than his 9.2 average.

However, Marquez has made more bad calls against the Los Angeles Dodgers in general than he has any other team with a whopping 15.63 BCR™. He has only a 5.77 BCR™ when calling Washington Nationals games, his lowest mark for any NL team.

The arguments can easily be made, now that we have the information courtesy of the UmpScores app, that Hallion doesn’t belong behind the plate in any postseason game and that Marquez really should not be there for this specific postseason game.

We don’t have to live in the dark ages anymore.

The best place to begin any conversation is with the facts. Now that we have them, we as baseball fans can have a far more earnest discussion about how to solve a problem that very clearly exists. It’s not about complaining about missed calls, it’s about understanding data that fundamentally impacts the outcomes of games. Now we can spend a lot of time pouring through it all to come up with some solutions.

This is just the beginning. 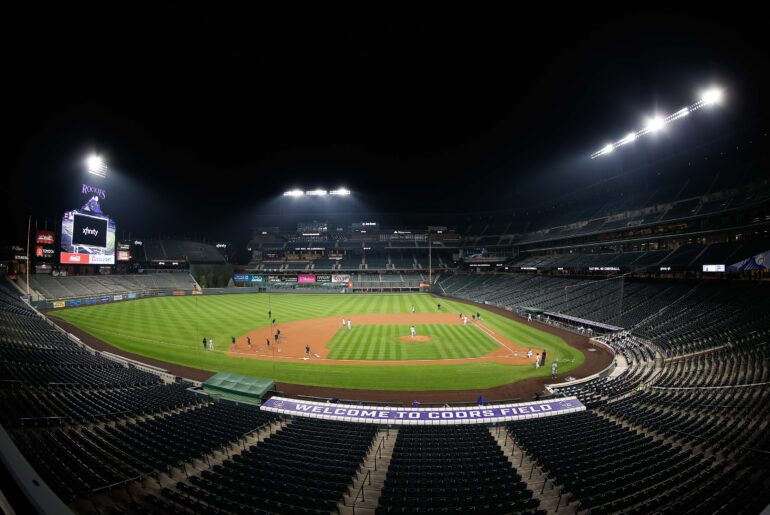