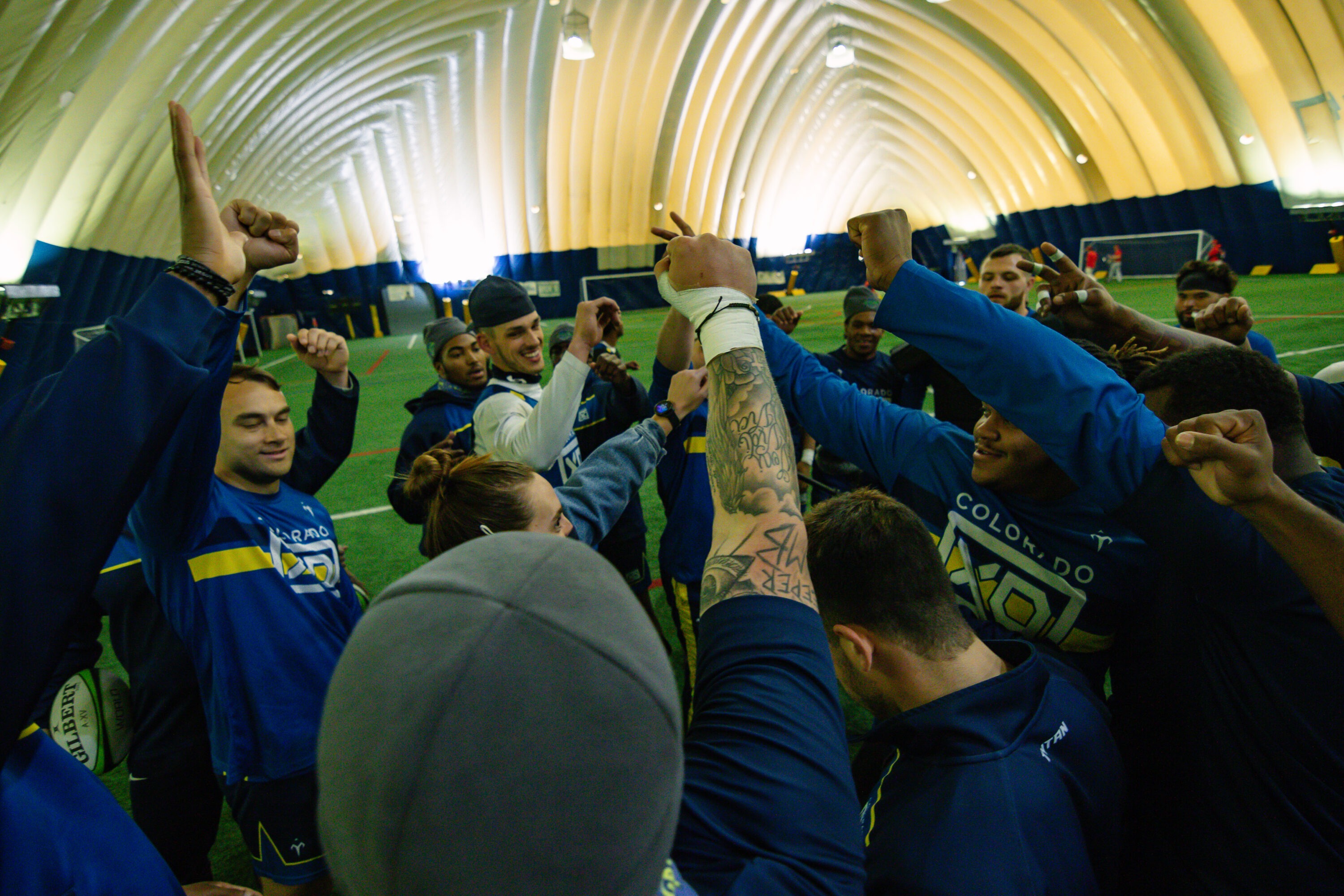 Saturday will be a big day for the Colorado XOs.

When the ball is put into the air on Saturday and the XOs take on New Orleans Rugby Football Club in a scrimmage that will serve as many members of the team’s first semblance of an organized rugby match, Director of Rugby Mark Bullock, his staff, and the players will begin to see the fruits of their labor.

For nearly 11 months, Glendale’s rugby department has left no stone unturned while they searched for roughly 30 players to take assemble a professional rugby team composed almost entirely of football players, basketball players, wrestlers, and track & field athletes that competed at either the Division I level or had stints in the pros.

27 players made the trek out to Infinity Park in November for a week-long tryout, and about half of those players returned in mid-January when the team reported for the spring. The other half of the roster was filled out – and continues to be filled out – by players that either heard good things about the November camp from their friends and former teammates, were interested in the opportunity after head of recruiting Peter Pasque tracked them down, or by what they saw on social media.

Full-time training began in the middle of January, and so did the long process of teaching nearly 85 percent of the roster the basics of rugby.

Six weeks later, they finally have the chance to see how far they’ve come and how far they still have to go.

From the beginning, Bullock has called this undertaking an “experiment.”

Saturday’s scrimmage will present them with their first opportunity to see the path their hypothesis lead them down. Despite not know what to expect or how the entire process was going to go, Bullock has been pleased with what he and his staff have seen so far. But without a real test, it’s tough to get a solid idea of where the team stands and what they’ll need to focus on moving forward. Saturday provides that opportunity, and Bullock is looking forward to what they find.

“Like any organization, like any team, we have our good days and our bad days,” Bullock said in his most recent appearance on the DNVR Rugby Podcast. “But overall the thing that is happening is that we are seeing a lot of growth in the players both individually and collectively.”

Every healthy player on the squad will see the pitch, but here is the Starting XV presented by @efirstbank for tomorrow's scrimmage against New Orleans Rugby Football Club!#RTNTC | #Mission23 pic.twitter.com/6K15BRKmjo

The motto around Glendale during the dog days of recruiting was, “no medium jerseys,” and they did their best to make that reality. When the XOs do finally take the pitch, they’ll do so with one of the biggest, strongest teams that you’ll find in American rugby. The forward pack that will trot out onto the pitch weighs in at an average of 265 pounds per player, which is heavier than the average forward in the Premiership, Top 14, and PRO14 according to RugbyPass. The backs carry with them an average of 203 pounds per player, which is right on par with the average back in the aforementioned competitions. Rugby is about a lot more than being big, but being big is certainly an advantage and size is one thing that will work in their favor come Saturday.

What they won’t have is experience. Of the 31 players on the roster, only six – Line Latu, Dan Stone, Malik Bryant, Daytwon Sheridan, former Raptor Campbell Johnstone and Ma’ake Muti – have played rugby before. Fortunately for the XOs, two of the six –  Johnstone and Muti – showed up within the last two weeks after their rugby plans for 2021 fell through when the Dallas Jackals withdrew from the upcoming 2021 season in January. Muti, whose brother Netane spends his Sunday’s at Empower Field at Mile High as a right guard for the Denver Broncos, is the only forward on the team with any rugby experience. The benefit of having a majority of their experience allocated throughout their backline means that some of their key decision-makers have an idea of what to expect.

Even without knowing exactly what Saturday will hold, the XOs are just ready to compete.

“I am feeling pretty good,” former TCU football utility man Casey McDermott-Vai said following the team’s final training. “I am feeling excited. It’s going be exciting, nervous, you know all of the feelings in your body are going and I just can’t wait to get there and just play. I’m excited.”

“I never feel nervous before a game,” former University of Rhode Island safety turned USA Bobsledder Norvel Stewart said ahead of the match. “It’s one of those things that I keep everything in until it’s time to hit the field and that’s when I bring that other person out. I’m never nervous. I am excited but I like to just stay calm before everything. But when it’s time to go, it’s a whole different story. It’s time to go.”

No one can be certain of the outcome, but Bullock has an idea of how the match will begin.

“I think when we play the first 10-15 minutes, it’s probably going to be a bit of chaos for them in terms of their mind,” Bullock predicted. “But if they are able to focus on what we’re doing in terms of our pattern and how we’re trying to play, we will be fine.”

From my viewpoint, we actually look like a rugby team in terms of putting phases together against defense, making pretty good decisions across the line. We are making those strides to being a rugby team and being able to play rugby.”

Throughout the XOs, feelings of excitement outweigh anything else because come Saturday, they officially become rugby players.