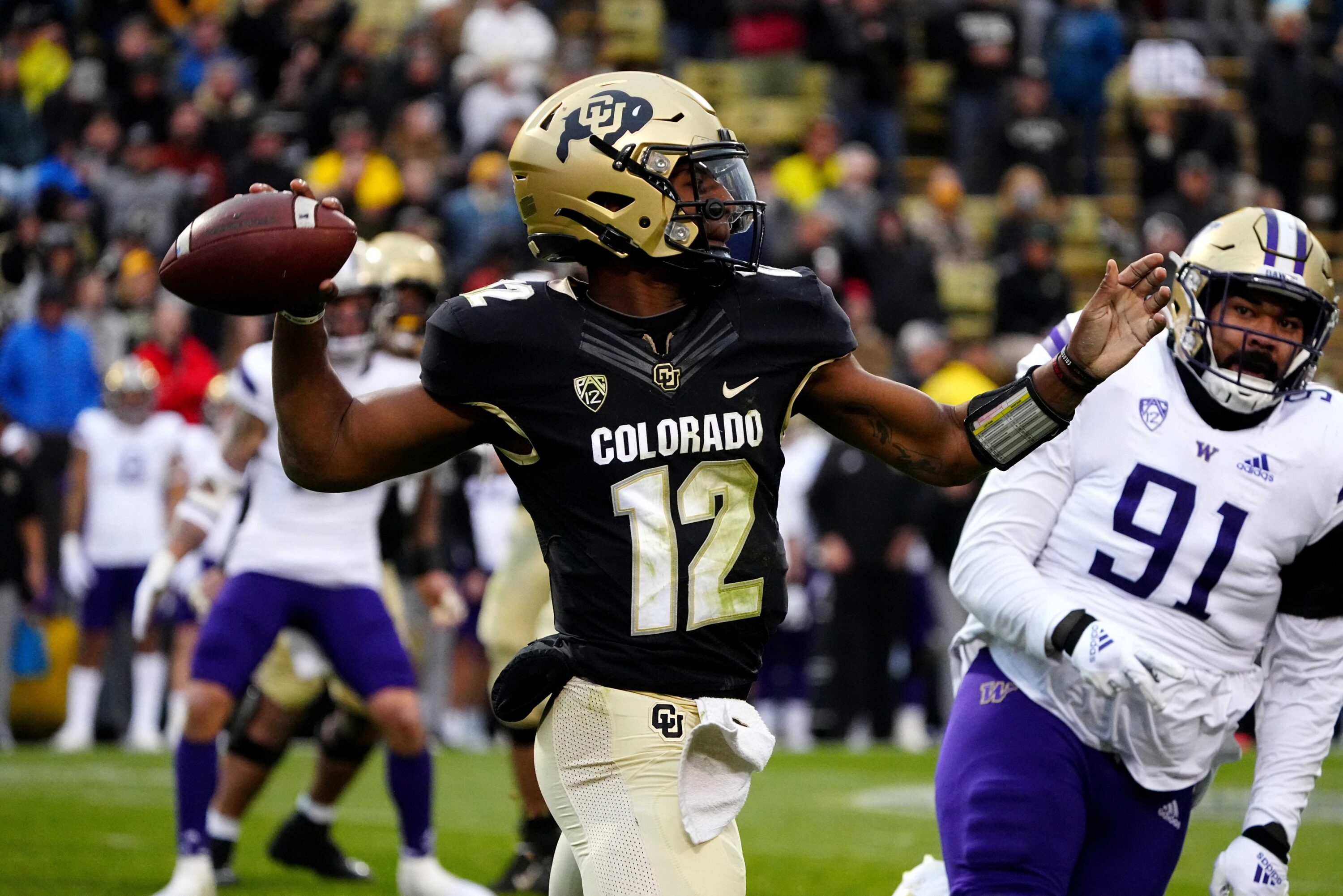 Buffs Film Room: What the tape says about J.T. Shrout and Brendon Lewis

Author note: Hello Buffs Fans, welcome back to DNVR Buffs. Some of you may be familiar with me from the DNVR Draft Podcast or the occasional Film Room on DNVR Broncos or Buffs. For those that aren’t, my name is Jake Schwanitz and I am the newest member of the DNVR family and will be your Buffs beat reporter for the 2022-2023 season. I have an obsession and passion for sports, most notably football. I’m looking forward to the privilege of covering your Buffs in football and basketball this year and hope to bring you the level of coverage you are used to seeing from DNVR Buffs. Make sure to follow us @DNVR_Buffs and my personal account @JakeSchwanitz to stay up to date on all things CU athletics!

Lewis has the advantage of coming into 2022 as the incumbent, but Shrout’s skillset could make this a tough decision for Head Coach Karl Dorrell and Offensive Coordinator and Quarterback Coach, Mike Sanford.

While Coach Dorrell and Coach Sanford marinade and mull over who will lead the Buffs offense out the gate on September 2nd against TCU, we decided to break down both Shrout and Lewis in an attempt to gauge who gives the Buffs the best chance to win this season.

Will Brendon Lewis’ sophomore leap be enough to keep the starting job?

It is no secret that Brendon Lewis struggled as the starting quarterback in 2021, especially early in the season. Lewis was forced to grow up quickly and showed signs that he was starting to come along and become a player that Colorado could rely on.

Lewis’ best game of the 2021 season came against Oregon State where Colorado pulled out the victory in a thrilling double-overtime contest.

Dual-threat quarterbacks pose the biggest threat to defenses on third down and red zone situations. On this play, Lewis’ mobility forces the defense into pursuit as he rolls out onto the edge. This in return, opens up late passing lanes and former Buff Brenden Rice is able to maneuver himself open on the goalline for an easy touchdown pass from Lewis.

Later on, Lewis found Montana Lemonious-Craig to take the lead late in the fourth quarter in what was one of Lewis’ best plays of the entire season.

Lewis’ dual-threat ability made the Beavers pay on this play as both inside linebackers are more concerned with Lewis’ legs rather than his arm. The more attention Lewis is able to gain before the throw means fewer defenders covering receivers downfield. Lewis shows great composure here as he avoids the sack, stays in the pocket and finds Lemonious-Craig with a beautiful touch throw to the pylon.

A few weeks earlier against Arizona, Lewis showed off his arm talent and made the case that he can lead this offense with his arm or legs.

Arguably Lewis’ best throw of the season came on this deep shot to Rice. Colorado gets a free play from the Arizona 3-tech jumping offsides and Lewis takes advantage of the situation by launching a bomb for Brendan Rice. It’s a great showing of mental processing from Lewis who not only understands that he has a free play on 3rd-and-11 but also shows disciplined eyes by looking off the safety before launching a perfect deep ball.

Later on in the fourth quarter, Lewis would deliver a near-perfect ball to Dimitri Stanley.

Colorado is running max protection up front and a variation of the smash concept to the field side. Lewis shows great composure again here as he patiently waits for Stanley to break his route to the corner before lobbing the football up where only Stanley could get it.

While these highlights show that Lewis can make an impact through the ground or the air, there were some legitimate concerns about his level of play throughout the season. Colorado’s passing game was inconsistent throughout 2021 whether it was due to Lewis, his pass catchers, or play caller at the time.

Lewis himself showed a tendency to be too conservative and while that resulted in only five total turnovers throughout the 2021 season, it also limited Colorado’s ability to create explosive plays.

While that play style limited turnovers, Lewis often held onto the ball too long which led to a clunky offensive pace that would stop the Buff’s offense before it even had a chance to get going.

For instance, on this play, Lewis has to hit Rice on the shallow cross or take off with the ball and make a play with his legs. Instead, it results in an ugly-looking incompletion with Lewis taking an unnecessary hit.

Lewis simply must be more decisive with the football and try to keep the offense on schedule in a more efficient manner to take that next step in his game.

Is J.T. Shrout healthy enough to play at his peak?

J.T. Shrout enters the 2022 season as a junior but only has eight career games played and one start dating back to his freshman season in 2019.

The former Vol was called upon often to come into the game and provide a spark for a struggling Tennessee offense.

Shrout was a three-star pocket passer in Tennessee’s 2018 recruiting class. In his limited playing time, he showed good ability and confidence in his arm talent which allowed him to be aggressive with the football. It’s also worth mentioning that while at Tennesee, Shrout showed good mobility for a pocket passer by rolling out, extending plays and even contributing in the run game.

Let’s take a look at some of Shrout’s most notable plays when called upon in Knoxville.

It’s worth noting the score and amount of time left in the game at this point since Florida was content to let Shrout take anything short and underneath. However, on this play, Shrout takes a chance and manages to throw a great ball between zones for a first down.

While Shrout is very much a pocket passer, he showed surprising ability as a runner for Tennessee.

Given that Shrout is coming off a knee injury, it would be surprising to see the Buffs call much, if any, QB power for Shrout in 2022. However, as evidenced by this play, Shrout can mix it up and contribute as a runner if need be.

Despite the score and time left remaining, Shrout was impressive in poise and ability late against Florida. Let’s start off with pre-snap. The Vols are going for it on fourth down and appear to catch the Florida defense somewhat off-guard. Shrout hustles his team to the line of scrimmage and immediately knows where he’s going with the football. Velus Jones wins the route early but before he can even get his hand in the air, Shrout has already let the ball fly in his direction. The timing and placement of the throw are near perfect. It’s not hard to imagine that Shrout earned himself some well-deserved respect from his coaches and teammates with how he operated the offense at the end of this game.

Two weeks later against Texas A&M, Shrout would be called upon again mid-game to help jumpstart the Vols offense.

Patience, poise and arm talent are on display here from Shrout. Shrout shows good body language in the pocket by not rushing his mechanics or the throw and as a result, it’s a touchdown for the Vols. 46-yard passes like this are routine for Shrout, his wind-up is as quick as it is efficient and the ball jumps out of his hand.

Once again, Shrout shows how confident he is in his ability to throw the football and throws a great ball between defenders for a third-down conversion.

It’s tough to truly know exactly what J.T. Shrout is capable of in 2022. Overcoming last year’s knee injury and staying healthy will be his biggest hurdles, as he attempts to become starting quarterback for the first time in his collegiate career.

It’s clear that he has natural talent and ability when it comes to throwing the football. Still, there’s a huge difference between making a few nice throws at the end of a game that’s already over and being someone that your team can rely upon week in and week out, start to finish.

It’s an interesting decision between contrasting play styles for Coach Dorrell and Sanford to decide between.

Do you go with the incumbent starter that has better physical tools but is lacking in terms of processing speed, timing and anticipation? Or do you go with the better thrower of the football who is recovering from a major injury and lacks ideal physical traits to be a threat on the ground?

Who will win the job?

It’s difficult to say who is currently in pole position to win the Buff’s starting quarterback job entering this season. Reports from camp have both Lewis and Shrout being given equal opportunities to earn the job thus far. Camp is winding down and it’s possible that we won’t know who will be the starter until it’s time for the offense to take the field for the first time against TCU.

While it’s the same two players competing against each other for the starting job as it was last year, the quarterback battle is now entering uncharted territory.

It was this time last year that Shrout was announced to be out for the entirety of the 2021 season and it’s easy to see as he progressed last year that Brendon Lewis is much more ready for primetime than he was at this point in 2021.

With new offensive coordinator and quarterbacks coach Mike Sanford running the offense in Boulder this year, there’s legitimate reason for hope and improvement from the Colorado quarterbacks.

Sanford has coached multiple All-American and NFL-caliber players including Jordan Love, Mike White and Ian Book. Those names and coaching pedigree prove he is able to work and mold a variety of different skillsets into good, efficient college quarterbacks.

And when it comes to his options for the 2022 Buffs, it’s harder to imagine a greater contrast in styles.

While both of these quarterbacks have a long way to go before they are considered for All-American or NFL notoriety, Buff’s fans should reasonably expect better play behind center in 2022.