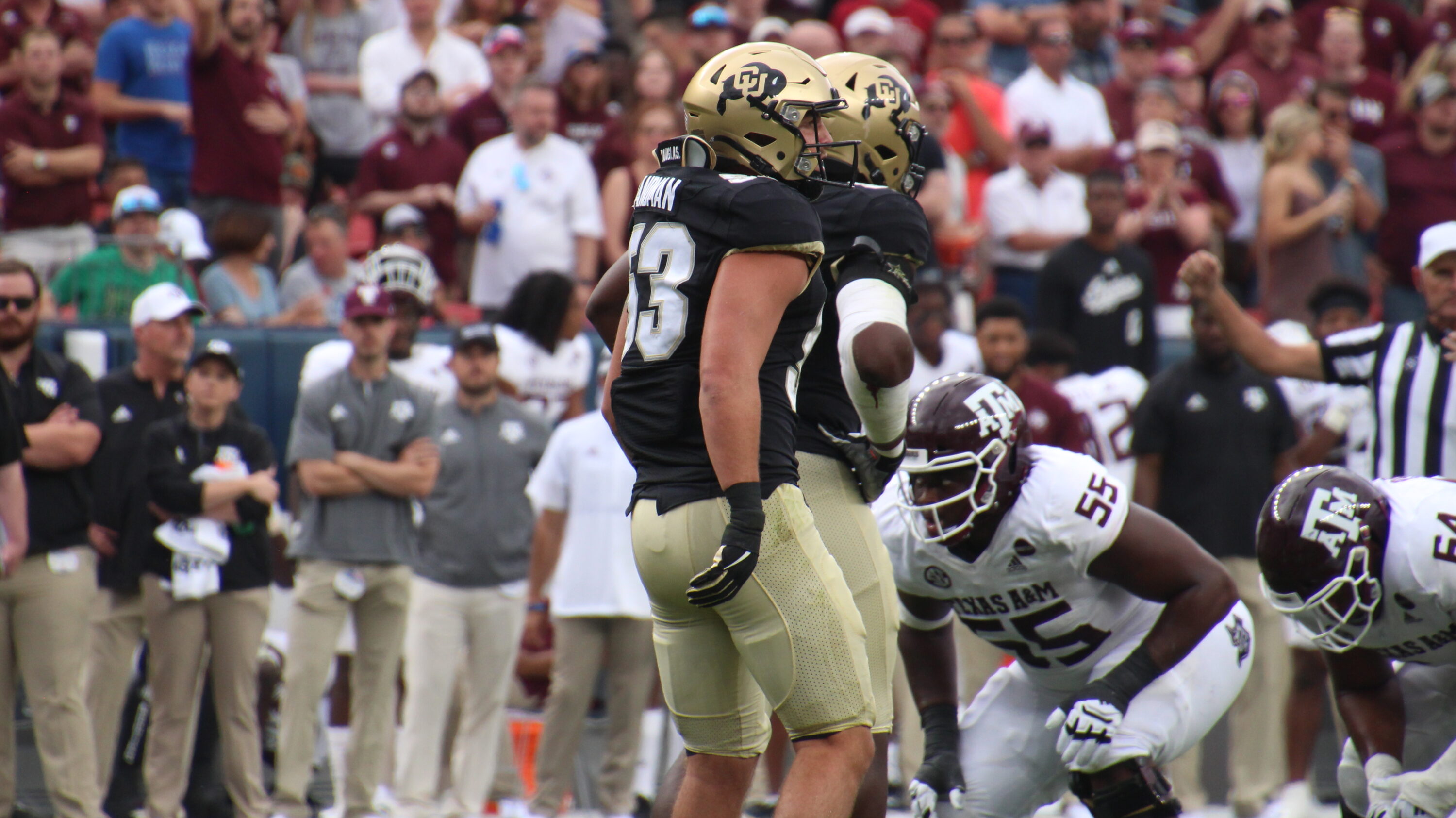 The Colorado Buffaloes and Texas A&M Aggies played nine times between 1995 and 2009 when the two schools played in the Big 12. Six of those games were decided by one score and on Saturday the two teams added another thrilling chapter to their series.

Quarterbacks Brendon Lewis and Haynes King combined for only three starts under center in their young careers going into Saturday’s game which meant that both defenses and running games were going to have to step up to earn the win.

While the Buffs ultimately fell short, letting up a game-winning touchdown with 2:41 remaining in the fourth quarter, the defensive performance was good enough to win. That’s encouraging news for a team that showed they have the talent and discipline to be a competitor for the Pac-12 South title late into the season.

Let’s dig into the best plays from the Buffs defense and the players who are going to continue making life difficult for offenses in 2021.

A&M’s first drive went three and out and then Brendon Lewis threw a pick putting the Aggies in Buffs territory early. Here, Nate Landman makes a great play to blow up the Aggie tight end and stuff the running back in the backfield. This play was the first of many where Landman was able to wreak havoc and destroy the Aggies run game.

Two plays later is the first turning point of the game. Guy Thomas is the star on this one and shows excellent discipline to stay home and not react to jet-action by the Aggies. He then defeats the block of the right tackle and stops Haynes King before he can get to the marker for a first down. Unfortunately, King would fracture his ankle on the play.

No one likes to see injuries, but momentum would swing towards the Buffs after this play with Texas A&M forced to turn to their backup quarterback.

Later on in the first quarter, Landman shows up again for another impressive stop. Another really nice display of patience and discipline as Landman reads the play, allows it to develop and just as the play-side guard reaches the second level, Landman sheds the guard and prevents what could have been a big play for the Aggies.

The combination of Brendon Lewis and Jarek Broussard on the ground would drive Colorado into the Aggies red zone and ultimately Broussard would score from two yards out to give the Buffs the lead.

A&M came out aggressive on this drive, passing on every play. This screen is played beautifully by the Buffs. Defensive tackle Janaz Jordan shows great instincts and play recognition by reading this screen the whole way. He’s able to stretch the play out towards the sideline where Landman is able to make a big hit in pursuit.

The Buffs would remain in control well into the second quarter.

Texas A&M boasts one of the strongest offensive lines in the country but Colorado’s defensive line was up to the challenge and had multiple plays where their strength was on display. Guy Thomas bullies the receiver and shows great pursuit running laterally down the line of scrimmage and meets defensive tackle Janaz Jordan for a minimal gain.

The first half was all about the Buffs’ front seven, but the secondary was absolutely playing its part. There were many plays in the first half where you could see the Aggies quarterback struggling to find anyone open downfield which allowed that front seven to close in and cause pressure. But as the game went on, the Aggies and Calzada would become more aggressive and the impact of the secondary became more apparent.

This is just straight Cover 1 from the Buffs. They challenged Texas A&M on the outside and frankly, outplayed them. Here is a beautiful rep from sophomore cornerback, Nigel Bethel Jr. Bethel does not overreact to the release off the line, stays square and gets his hands on the receiver before making a great undercut to get the pass breakup.

On the next Aggie’s possession, the Buffs’ other outside corner, freshman Christian Gonzalez, would get in on the action and create his own third-down stop.

Similar to Bethel’s rep the series before, Gonzalez shows great patience and technique to stay square and in position off the release and he is able to use his length to get a paw on the ball for another Buffs third-down stop.

Once again, we’re talking about Guy Thomas. The Aggies responded to the chaos that Thomas was creating off the edge by pulling a guard and putting the running back in pass protection against Thomas. Despite the two-on-one disadvantage, Thomas shows off his motor and lays out to get the stop on Calzada and force the Aggies into second and long again. Calzada was able to get back to the line of scrimmage on this play so it did not go down as a sack.

Later on in the drive, Chrisitan Gonzalez would come up with another big play.

We showcased Gonzalez’s length and how he was able to create a pass breakup because of that, on this play Gonzalez’s long strides and long arms make it so that he is able to stop this smoke-screen before it even gets started. Gonzalez puts the Aggies behind the chains again.

Time was winding down for the Aggies at this point and Nate Landman very nearly secured the upset win for the Buffs on this play.

Landman is playing underneath zone coverage and does a fantastic job at reading the quarterback’s eyes and getting between the receiver and the ball to break up the pass. Landman has three interceptions in his career for the Buffs but if he would have been able to come down with this one, it would have been the biggest one of his career and he likely would have scored.

Despite all the pressure and chaos that the Buffs’ front seven was able to create throughout the game, they only had one sack on the Aggies.

On the Aggies scoring drive late in the fourth quarter, the Buffs threw everything at them to try and win the game. The Buffs get great pressure up the middle from defensive tackles, Na’im Rodman and Jalen Sami unfortunately it would not be enough to stop the Aggies.

It was a disappointing end to the game but Buff’s fans should be proud of their team as they put forth one hell of an effort and gave the number-five team in the country everything they could handle in all three phases.

While it may take a while to look back on this game and smile, this was an incredibly encouraging effort. The Buffs face one of the toughest schedules of any team in the Pac-12 but if they continue to put forth efforts like the ones against Texas A&M, this team should not only have a shot at the Pac-12 South title but a shot to become Pac-12 champions.