Mobile, Ala. — During a run play on Wednesday afternoon, UTEP’s Will Hernandez got inside position on the defender in front of him. He pushed him about three yards off of the line of scrimmage before the defender broke free and was able to put a hand on a cutting Kalen Ballage as he streaked down the hash marks. In a real game, the defender may have grabbed him and made the tackle, and if he didn’t, he would have at least slowed him down.

A Broncos coach, who I could not make out, emerged from a group of blue and orange sweaters while yelling in the direction of Hernandez. The yell was not of the disciplinary nature but more of an expert critique.

As the coach positioned his arms and bent his knees, Hernandez paid close attention. Soon afterward, the coach gave Hernandez a slight tap on the bottom to say, “Great block, let’s just get in better position next time.”

This is the type of attention Hernandez has been privileged to all week from the Broncos. In fact, the Senior Bowl staff actually switched Hernandez from the South team to the North so he could play under his head coach from UTEP, Sean Kugler, who was just hired to coach the Broncos offensive line.

Hernandez opened up about Kugler to BSN Denver on Tuesday.

“You can for sure expect the whole offensive line to know exactly what they’re doing and to be well prepared for the game,” the guard said. “You can expect everybody’s game to improve with a coach like Sean Kugler. He’s a great coach, he’s well respected and there’s a reason why the Broncos hired him right away. You can definitely expect the o-line to do great things.”

If Hernandez’s play is any indication, Sean Kugler is a hell of a coach. The massive guard who weighed in at 340 pounds on Tuesday morning has been unpenetrable throughout practice sessions this week. He wouldn’t say if the Broncos have spoken to him directly but it doesn’t take an NFL insider to know the answer to that. 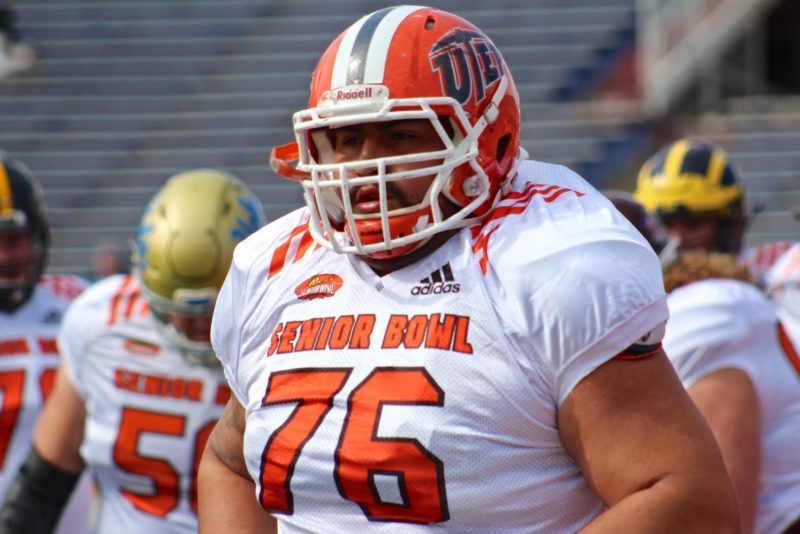 Hernandez would have no problem playing in Denver.

“If the Denver Broncos believe in me, man, I’m in 100 percent… If they took me, it would be a dream come true.”

As for coach Kugler, Hernandez gives a colorful description.

“He’s definitely a hard ass but the best way to describe him is firm but fair,” he proclaimed. “He’ll always be hard on you. He’ll make sure you know what you’re doing but in the end, it’s only because he cares. He actually loves all of his players and he does it for the good.”

Hernandez was Pro Football Focus’ highest graded college guard, with an overall grade of 94.3. He also graded as “elite” in pass blocking (91.3) and run blocking (91.4). But the most insane stat comes from the 2016 season, where he played 380 pass-blocking snaps and allowed just one pressure the entire year according to PFF.

Most experts currently believe that he will be available in the second round, but Hernandez still has the scouting combine and his pro day to increase his stock. If the Broncos want this giant, they may have to trade up from their current position at #40 in the second round.

To hear our interview with Hernandez from Mobile, Alabama, listen to the BSN Broncos podcast from January 23rd.

DNVR Broncos Podcast: What does it say about the Denver Broncos that they haven’t moved on from Nathaniel Hackett?

Five takeaways from the Broncos’ 23-10 loss to the Panthers