As injury news continues to build up, Colorado looked to pull off another challenging feat in a Saturday night matchup against the visiting Carolina Hurricanes. The latest injury news is an expected six-week recovery for Shane Bowers.

The 23-year-old forward sustained an upper-body injury in his NHL debut in Thursday’s contest. Colorado pulled out a solid 5-3 win over Nashville with a burst of offense from Mikko Rantanen and Logan O’Connor.

Eagles captain, Jayson Megna, received the call-up and Gabriel Landeskog was placed on LTIR to accommodate the necessary roster move. As a result, Colorado’s lineup remained in flux particularly on that fourth line.

Early into the first, a Nathan MacKinnon drive to the net drew a tripping penalty on Sebastian Aho, but it was swiftly negated by a Cale Makar interference call. Makar was posted at the blueline and stonewalled Jesper Fast. This disrupted the chance and the four-on-four was uneventful.

Francouz stopped a one-timer from the left circle at 10:54, the Czech goaltender was looking to secure his first win of the season with a solid performance tonight.

Shortly after, Josh Manson took a tripping penalty against Jesperi Kotkaniemi. Carolina’s powerplay moved the puck well and created a lot of open space, but the Avs had a good kill. They struck a nice balance of solid stick placements to create blocks and tip-outs and aggressive, opportunistic transitions to get the puck up ice and eat away at the time.

A skirmish at 14:05 between Andrew Cogliano and Andrei Svechnikov put the Avs on the powerplay. The top unit continued to pose a lethal threat, but not in the way anyone expected. Cale Makar notched his second goal of the season. He shot the puck from up high and the puck ricocheted off the glass and in behind Antti Raanta whose skate carried it all the way in.

As the period winded down, Rantanen dished a hit on Calvin De Haan who took an awkward fall in the corner. Rantanen stayed strong on top of the puck and managed to skirt around a second skater and into the slot. He passed the puck to a blazing Makar coming into the right circle. Makar ripped a shot and in, earning his third goal of the season a matter of minutes later.

Defenseman Kurtis MacDermid took just two shifts early into the period and did not make another appearance after an awkward fall behind Carolina’s net. The already depleted defense took another hit. MacDermid suffered a lower-body injury and would not return to the game.

On the whole, it was a weird period. Both teams looked capable. Colorado benefited from puck luck on the first goal, and had a slight edge in expected goals and scoring chances.

The first half of this period kicked off highly penalized. Sampo Ranta took a holding the stick penalty early and Colorado’s kill continued to do what they did well in the first.

Josh Manson tipped the puck out of play in Colorado’s end at 6:42 and was penalized for delay of game. Soon after that kill expired, Jordan Martinook took a stride too many and left his feet to complete a hit on Devon Toews.

Martinook went to the box for charging at 9:05 and though this powerplay was unable to convert, the second unit demonstrated good puck movement and generated a good chance from J.T. Compher.

Under the five-minute mark, Carolina came in on the rush on a two-on-one. Jacob MacDonald was the first skater back, and Evan Rodrigues attempted to get back as well. MacDonald got down to try to block the passing lane, but Martinook still slipped it past him to Jordan Staal. Staal expertly knocked Toews’ stick away, received the pass, and shot it in in one fell swoop.

Colorado entered the third period up 2-1. It was another weird period, Colorado still had the edge in all situations but Carolina had the strongest play between the two in five-on-five. Colorado outshot Carolina 21-15 and generated 60% of the scoring chances in that frame.

Four minutes into the first, Toews bounced the puck along the boards to Rantanen who drove up ice with MacKinnon at his wing on the rush. In a two-on-one, Rantanen backhanded the puck to MacKinnon who one-timed it in from the left circle.

With a little over two minutes remaining, Rantanen recovered a loose puck in front of the net and sent it up the ice into Carolina’s empty net. It was his fourth point of the night with a goal and three assists. Colorado won 4-1.

Both teams seemed to fight the puck at points. Carolina especially battled with themselves in this right. On paper, these teams earned different advantages at points.

For the Hurricanes, it was success in the faceoff dot with 62% of wins and 65% in their offensive zone. Carolina was outshot 25-28 but generated 61.11% of high-danger chances.

For Colorado, they won the special teams battle. They had a perfect penalty kill on all five they faced. The perfect balance of aggression and poised positioning mentioned earlier points to what they’ve been building towards. The word “aggressive” has been used by personnel to describe their process, and it has appeared they have been over-aggressive at times when it saw less success.

“They did a really nice job against the rush,” Bednar said. “I thought they stayed really aggressive when pucks were in question. They were focused and in tune. They’ve been doing a lot of work with Nolan Pratt, and watch a lot of video – brushing up on all the details that have been coming [along] – but tonight it was excellent.”

Their overall powerplay numbers were bolstered by a successful conversion on one of four attempts – even if it was a little weird.

More importantly, they weathered the injury storm most impressively. They are now on a four-game winning streak in spite of the growing injury list. You don’t love to see Cale Makar and Devon Toews with just over 26 minutes TOI each. The load management moving forward will pose an important question, “Can the Avs sustain this without risking further injury due to overuse?”

“They’ve been impressive,” Bednar said, talking about the players who’ve stepped up. “They’ve been really consistent in what they do. It just shows you that they got a deep desire to win. They put a lot of pressure on themselves to get the job done on a nightly basis.”

Sampo Ranta left about midway through the third period to get his face fixed up, and Bednar did not have an update on the status of Ranta or MacDermid in the postgame. Ranta had a great play in the third where a stick play broke up a pass in the defensive zone and he drove to the net on the resulting transition and was denied. Colorado is in a precarious position cap-wise, so it was not surprising to learn that Jayson Megna and Sampo Ranta have been reassigned to the Colorado Eagles for the time being.

Francouz was able to earn his first win of the season with 24 saves on 25 shots for a 0.960 SV% on the night. He was tested less than he has been in other contests, but made important, timely saves and successfully backstopped an ailing Avalanche team.

Mikko Rantanen continues to shine at an opportune time. “He was great,” Jared Bednar said. “[He was] physical, hard on pucks, playing with guys on his back, making plays forehand and backhand – that is fantastic to me.” Rantanen now has 19 points through 12 games and has extended his point streak to five games.

When asked if he felt a responsibility to step up as the injuries pile on, Rantanen pointed to the importance of leading by example. He said it’s necessary to play the right way offensively and defensively to show the younger guys who are also stepping up what they need to do. “If we do it right, they’re doing it right.”

The Avs will get a much-needed day of rest tomorrow. They will reconvene for morning skate on Monday ahead of a match-up against the St. Louis Blues – a team who recently snapped their eight-game losing streak with two wins. 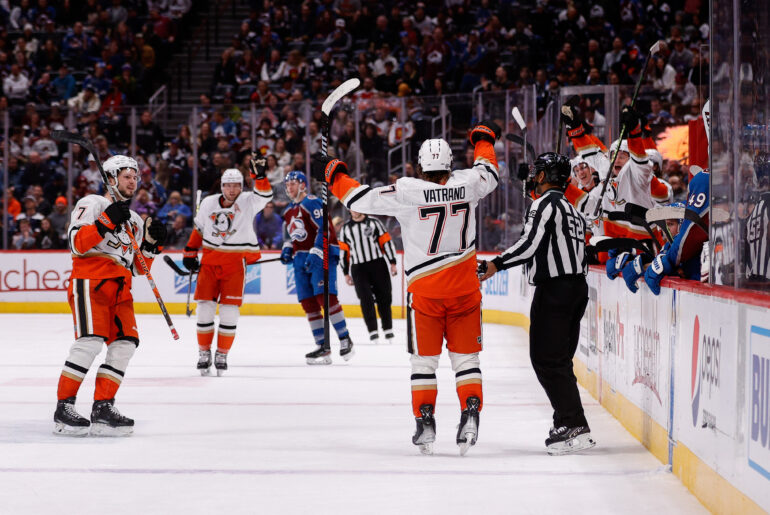